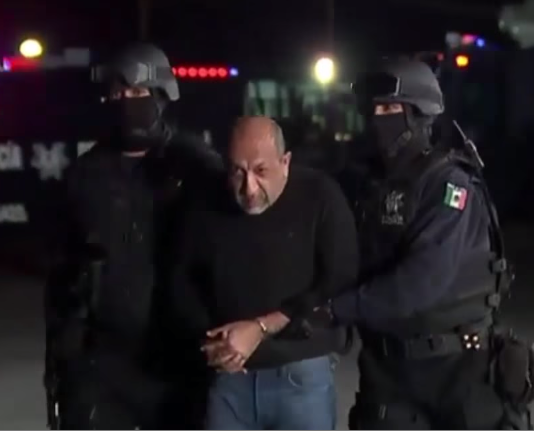 A week ago, the Mexican government celebrated another success in its Guerra al Narco: the capture of two drug kingpins. Servando Gómez Martínez (picture above), a.k.a “La Tuta” was arrested in a somewhat peculiar manner in Morelia, Michoacan state. The Mexican security forces located the leader of the Knights Templar cartel, a former primary school teacher, in part thanks to his girlfriend bringing him a birthday cake. A couple of days later, the head of another well-known violent Mexican drug-trafficking group, Las Zetas, wasapprehended by the security forces in the suburb of Monterrey, Nuevo Leon state. Omar Treviño Morales, known as “Z-42″ (picture below) had taken over Las Zetas cartel after the arrest of his brother, Miguel Angel Morales, in July 2013. 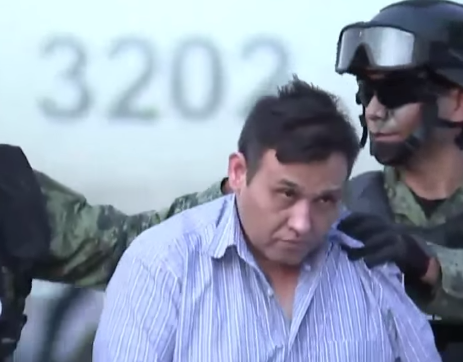 The Gómez and Morales captures fit in the larger government’s tactic against the narco-traffickers. Last year, the security forces made a huge buzz after the re-arrest of the leader of the largest and most powerful Mexican cartel: the Sinaloa group. Joaquín “El Chapo” Guzmán (featured image) was apprehended in February 2013, 13 years after escaping from one of Mexico’s high-security prisons.

As always, the scenario is well rehearsed. After their arrests, the drug kingpins are paraded on the tarmac of Mexico City’s airport. Escorted by two armed and masked Mexican security agents, they are led either to a police truck or helicopter. An agent always holds the drug leader by the neck, sometimes forcing him to bend the head.

The symbol is strong. Illustrated by its armed operatives,  the Mexican government is shown as being all-powerful. It can subdue the narco-traffickers and stop short their drug trade. The drug kingpins are, on the other hand, depicted as weak. Wearing common clothes, their faces are shown to the world. Since shadow defines the drug-trafficking business, this tactic is a direct affront to it. The Mexican government can shed light on their activities. The message is clear: “One after the other, your leaders will fall like flies.” Is this political mediatization of the Guerra al Narco representative of the actual facts? The truth is, as always, quite different…

The Mexican government praises its approach against the drug cartels. The Mexican Interior Minister, Osorio Chong, stated that “we now have 90 of the 122 most dangerous [people] detained,” emphasizing that most of the drug kingpins were arrested without a gun shot being fired. While this might be true,violence and corruption nonetheless continue to plague Mexico. The best example is the 2014 disappearance and probable murders of 43 Mexican students in the city of Iguala at the hands of the local drug cartel supported by local security forces.

The current Mexican President, Enrique Peña Nieto, is following the strategy of his predecessor, Felipe Calderón, who initiated the “War on Drugs.” As I argued in a paper, Calderón’s approach proved to be a total disaster. Here are the concluding thoughts:

Rather than solving the security problems related to drug-trafficking activities, Calderón’s strategy exacerbated them. Firstly, Calderón’s approach failed to accomplish the three top priorities on his agenda: ensure public security, reinforce Mexican security structures, and reform both the legal and judicial systems. Secondly, it actually aggravated the situation. Violence skyrocketed over his term [and the number of drug cartels actually increased]. Corruption became endemic in the army and the police forces. All of this occurred despite his attempts to root out drug cartels’ penetration of the security forces, reform the judiciary, and disturb the drug-trafficking organizations’ structure and trade patterns. Finally, Calderón’s War led to three unexpected by-products whose potential negative effects could worsen even further the initial disaster. The militarization of the Mexican state, the psychological impacts of Mexico’s Drug War on the Mexican population, and the movement of drug cartels into Central America could respectively endanger Mexican democratization, produce a “lost generation”, and threaten the stability of the region as a whole. Why did Calderón’s approach fail?

His policies were based on a deep misunderstanding of both actors involved in the drug issue: the drug-trafficking organizations and the Mexican security forces. In regards to the former, Calderón’s strategy perceived drug cartels as criminal organizations. It thus failed to see that they in fact behave like any other formal business with only one difference: as drug cartels cannot pretend to legal means to ensure their competitiveness, they resort to violence. By opening channels for newcomers and threatening drug cartels’ trade routes, Calderón’s response led to a surge in both inter-cartel violence and cartel-state confrontations. Focusing on the products, his approach did not target the source of cartel’s revenue: money laundering. Finally, Calderón overemphasized the Mexican security and judiciary’s capabilities to fight drug-trafficking organizations. Corruption is deeply rooted in both the military and the police structures. Furthermore, whereas the former is not tasked to fight drug cartels, the latter is ill-equipped and poorly trained. Despite reforms, the Mexican judiciary still fails to prosecute both drug cartel criminals and human rights violation committed by security forces. Within this body, corruption is also well-established but the main handicap is the simple fact that most justice officials fail to perform the most basic stages in investigation procedures, such as questioning witnesses.

Despite his promises to revert the errors made by Calderón, Peña Nieto did not establish a new strategy. To buff up the security with armed police, military and now vigilante patrols remains the main remedy. The vigilante case is nonetheless a new approach. The Mexican state of Michoacan, where “La Tuta” and the Knights Templar once strived, has for example experimented with this.

The vigilantes have both strengths and weaknesses. First, they are citizens defending themselves. This means that they know the people living in their towns or cities and have an idea of who belongs to which side. Unlike the Mexican military or federal police force that remain in camps and only go out to patrol, the vigilantes are constantly in town. In other words, they have a strong relationship with the local population. A strategy that has often be used by drug cartels to alienate the population from the Mexican state. Second, they blend in the crowd and are not as flashing as armed and dressed official security forces.

On the other hand, vigilantes represent often a loose group. Even though, they pledge allegiance to the Mexican government, there is no certainty that they will respect it. More worrying is the fact that they are as heavily armed as official security forces. The government provides them with the weapons. The risk is that they become powerful actors, attracted and corrupted by the drug trade. This appears to have already occurred in the Michoacan state. With the fall of “La Tuta” and his cartel, the Knights Templar, a vigilante group has stepped in to take-over their illegal activities. “The Viagras” are suspected by the Mexican government to run drug-trafficking networks. As the leader of the group states in the video, the government, rather than the Knights Templar drug cartel, is now their enemy.

If the vigilante groups start to be involved in drug-trafficking, Mexico could very well spiral down in a more alarming vicious circle of violence whereby three actors would fight for supremacy: cartels, vigilante groups, and state security forces. Before, small cartels filled the void left by larger ones. Even though leaders were captured, they were quickly replaced. Now, vigilantes might do the job. However, it is key to understand that vigilante groups also have a lot of potential. Unlike Mexican security apparatuses, they have the trust of the local population. The government thus must find a way to incorporate them into its tactics in the current Guerra al Narco. As of today, the most important task for the Mexican state remains to change its approach to the drug-trafficking problems. First and foremost, it needs to change and adapt its perception of the actors involved in the drug issues. In the following TED talk, Rodrigo Canales argues that “our current understanding of drug violence and what leads to it is probably at the very least incomplete.”

Calderón’s misunderstandings were fatal. Peña Nieto did not learn the lessons. Part of the solution might be offered by the words of the people the Mexican leaders are actually fighting. Referring to Mexico cartel violence, “La Tuta” stated that “this is not organized crime. If anything this is disorganized crime.”  With this in mind, the Mexican government should start to work for the reduction of violence, rather than fight against the violence. 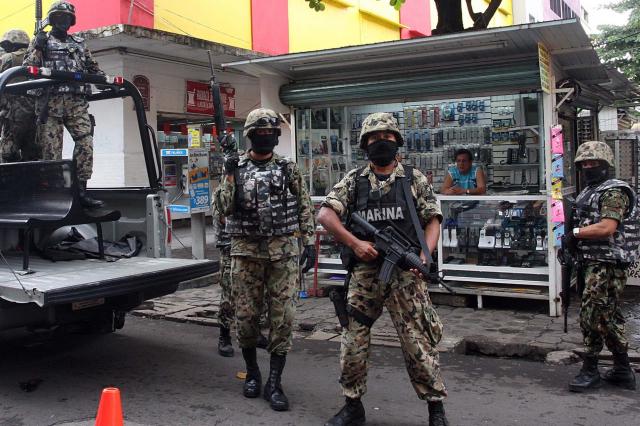