Michael Sheldon is a researcher for Bellingcat. He has a background in open source research and verification on the conflict in the Donbas. Prior to joining Bellingcat, Michael worked at the DFRLab.

Following Russia’s unsuccessful assault on Kyiv and northern Ukraine, the Russian military has intensified its efforts in Ukraine’s east, particularly in the Donetsk and Luhansk Regions. But Russia’s military has not been alone as its soldiers have edged slowly forward in recent weeks. Groups of irregular troops and fighters have also been seen in the area, operating alongside the Russian military in the direction of Kharkiv Region.

Fighters from the Wagner Private Military Company (PMC) have reportedly participated in the assault on the town of Popasna. The “Borey” group, meanwhile, has posted about their participation in an offensive in the Donbas. The Cossack group, “Don”, is also reported to have been operating on the Izyum front in the southern Kharkiv Region.

Other social media footage and content from unofficial fighting groups showcased their presence and activities in Russian-occupied Ukraine and on the front lines. These include an operation headed by a Russian politician, who continues to serve in the country’s State Duma (Federal Assembly).

Many from these irregular fighting groups have been operating in the Donbas since 2014, when Russia first sought to capture territory in eastern Ukraine under the guise of patriotic, pro-Russian separatist rebels.

As the invasion grinds on, Russia has undertaken what some call a “shadow mobilisation” to address its manpower woes. Given that context, calling on irregular armed forces might make some tactical sense. But one expert told Bellingcat that manpower was only part of the motivation.

Pavel Luzin, a Russian political analyst, told Bellingcat that the Russian authorities do not only use mercenaries as “gun fodder” but also as a tool for preventing political threats within Russia. “The Kremlin has recruited and used mercenaries since 2014. There is no private initiative in this field, and all the mercenary groups are affiliated with branches of the law enforcement services”, said Luzin, who regularly writes on military issues for the independent website Riddle Russia.

Just how many of the most recent posts are propaganda and how much is representative of these groups actual exploits is, as always, hard to tell.

But a little investigation of the images and videos posted online by the groups themselves can provide some clues – as well as highlight their often poor operational security and penchant for bragging.

The Union of Donbas Volunteers

Some of the militant groups augmenting Russian military power, and identified in social media posts seen by Bellingcat, fall under the umbrella of the “Union of Donbas Volunteers” (SDD), led by the former prime minister of the self-proclaimed “Donetsk People’s Republic” (DNR) Alexander Borodai.

After leaving office in 2014, Borodai found himself as the head of the SDD, a large organisation of fighters from Russia’s war in the Donbas with local chapters all over Russia. Borodai currently serves in the Russian state Duma as a deputy for the ruling United Russia party of President Vladimir Putin.

Since the beginning of Russia’s full invasion of Ukraine in 2022, units tied to the SDD have been active in Kharkiv Region, as evidenced by social media posts from the group.

The SDD says its current presence in Ukraine is made up of five units – detachments Sever, Veresk and Centre, as well as battalions Oryol and Ryurik.

Before the invasion in January 2022, executive director of the SDD, Andrey Pinchuk, announced that the group was establishing detachments to be sent to the Donbas. In late April, Borodai posted images of a visit to some of the SDD units on his official government website.

The pictures attached to the announcement showed Borodai with veteran fighters from Russian-backed units, which had fought in the Donbas since 2014. Among the fighters recognisable in the photos were Yan Petrovsky of ultranationalist paramilitary group Rusich, and Oleg Pugachev of the Sparta battalion, a DNR military unit.

Reference images from the camp’s website clearly showed the same buildings as the images on Borodai’s website. Combining this information with an address provided for the camp on Yandex Maps, it was possible to confirm the location of the photos with satellite imagery.

By the time of Borodai’s visit, some of the fighters had already showed off about being active in the conflict.

A fighter who had posted images of radio communication seminars for SDD fighters at DOL “Yunost” also posted footage of target shooting at a range. In the foreground of the video, a man with an SDD patch was visible, while the owner of the Telegram channel was firing a precision rifle. Bellingcat geolocated the range to Russia’s Belgorod Region, at a location which is listed as an FSB border service shooting range on Wikimapia.

Geolocation of SDD fighters at a shooting range in Belgorod. Map link

The range appeared to also have been used in competitions for precision shooting, and was more easily recognizable in this footage as most satellite imagery was either outdated or overexposed. The fighter also posted a photo of the “88” truck at this location, and would later go on to post videos from SDD positions in Izyum.

The Norwegian broadcaster, NRK, reported that fighters from “Rusich” appeared to have taken part in combat operations along with former fighters from the Russian-backed DNR “Sparta” battalion, visible in other images depicting the group’s activities in Ukraine in the early days of the war.

Meanwhile, members of Rusich, as well as other fighters connected to this group, posted images of themselves training and preparing for combat.

For example, on April 20 the Rusich fighter and social media rapper Yevgeny Rasskazov published a photo of himself and a colleague on Telegram. In it they stand in front of a truck that bore the marking “88” – a common neo-Nazi code for “heil Hitler”, with the two eights representing the eighth letter of the alphabet (HH). The truck also bears a Tyr rune, a symbol with established far-right symbolism.

A truck of the same model with the ᛏ88 marking — albeit in a different position — was also seen in a May 10 video posted to VKontakte by Timur Okkert, a Cossack and SDD member frequently spotted alongside Borodai. It is not known whether these two vehicles are one and the same. 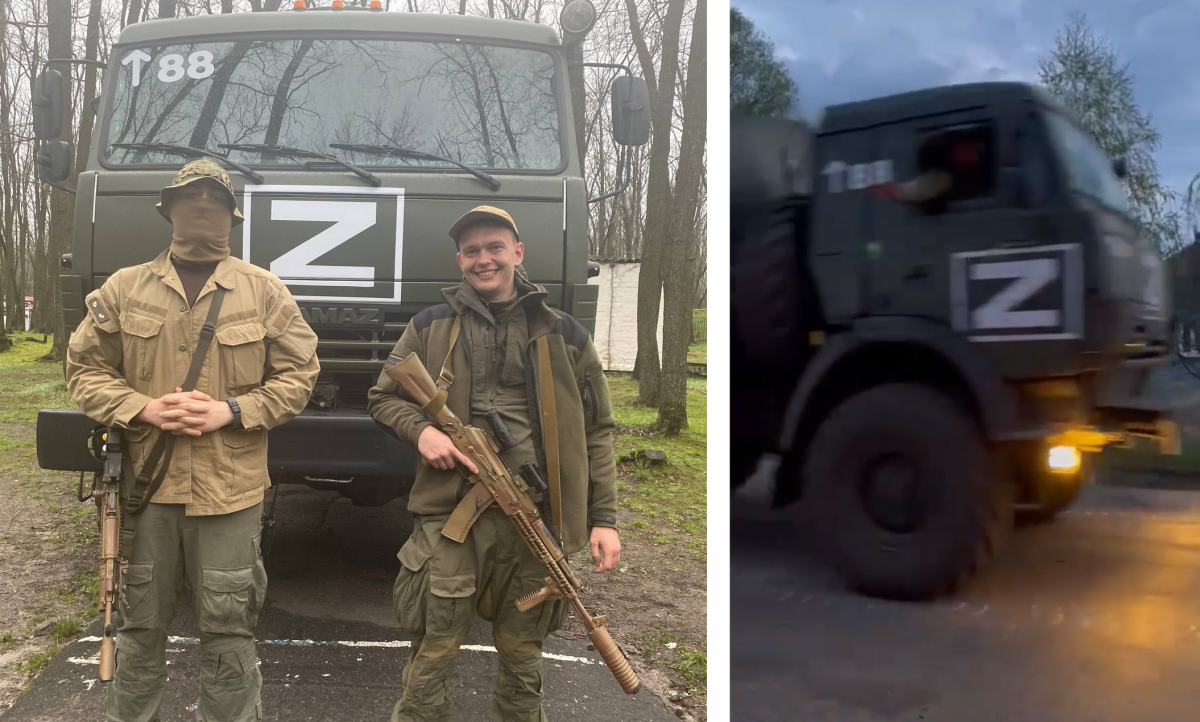 In January 2022, the New America think tank published an analysis of Rusich’s Instagram page which suggested that the group had plans to enter Kharkiv as early as October 2021. The same report stated that Rusich and its senior members also have a long-standing relationship with the SDD, and have conducted joint training sessions with other SDD members.

The video was filmed by Oleg Pugachev, shown holding the camera, a former fighter with the Sparta battalion, showing Okkert sitting in a car with Borodai on the side of a road as the convoy passed by.

The convoy consisted of five Kamaz trucks, one T-72 tank, two Mitsubishi pickup trucks, along with other vehicles marked with ‘V’ and ‘Z’ to identify themselves as friendly to the Russian army units operating in the area.

On the Izyum front

In mid-May, State Duma deputy and leader of the Russian nationalist party “Rodina”, Alexey Zhuravlev, posted videos of a trip made to the front lines with Borodai.

On this trip, Zhuravlev filmed locations apparently held by SDD at the time. He also shot some footage of himself at a farm, comfortably away from the front lines, firing an AK rifle and throwing a hand grenade. Zhuravlev later shared the video with his Telegram followers.

There are a limited number of farms of this size in the Izyum area, thus making the location of this video shoot easy to geolocate on a map.

Geolocation of Zhuravlev at a farm in Izyum. Map link.

Zhuravlev claimed that the video was shot at a position held by one of the SDD battalions.

Other footage and satellite imagery did show that one of the warehouses at the farm had likely been hit by artillery during the time that Zhuravlev was in the area.

However, greater evidence of military activity appeared to be just a few kilometres up the road.

A video on Zhuravlev’s Telegram channel showed a camp, which he claimed to be a position of the “Veresk” battalion (although the SDD claims this unit to be a detachment). Here, military trucks and fighters were visible. Footage posted by a fighter who regularly appears alongside SDD armed groups in early May appeared to further show that the location was in use.

Knowing that the camp appeared to be in an industrial area of the city, and assuming that it took place near Zhuravlev’s other Izyum video, it was again relatively simple to narrow down a search area to find a solid match for where the footage was taken. 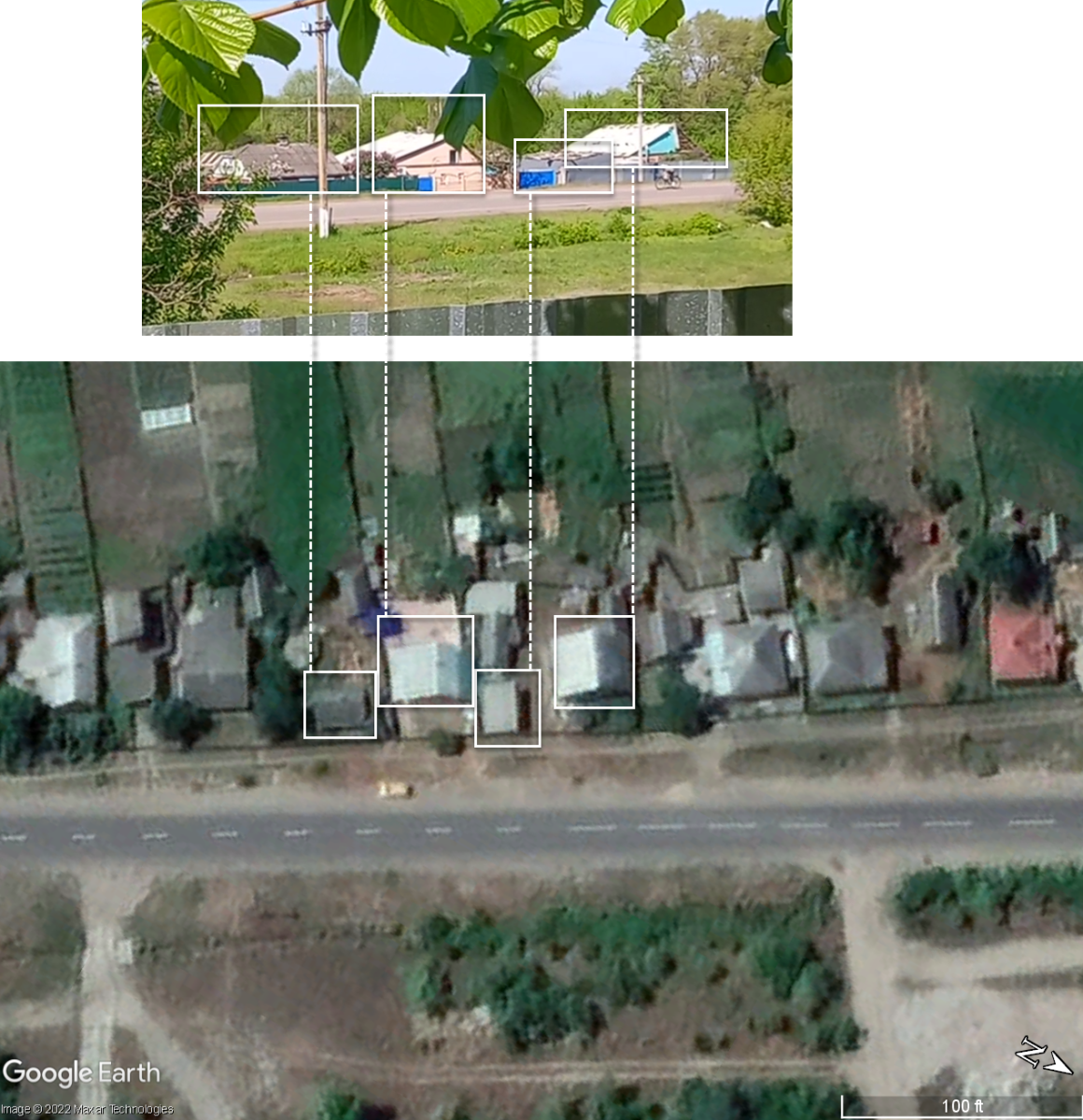 Geolocation of houses across the street from a claimed SDD base in the Izyum area. Map link.

In another video, Zhuravlev visited a location on the outskirts of Balakliya in Ukraine’s Kharkiv Region.

In the post, Zhuravlev described the location as a position held by the SDD’s “Viking” battalion. No such battalion has been claimed to exist by Borodai or the SDD; however, a battalion commander by the nom de guerre “Viking” does exist.

Geolocation of a claimed SDD base in Balakliya. Map link.

Alexey “Viking” Sosonny commanded the Viking battalion in the DNR’s 1st Brigade in 2015 and 2016. The battalion attracted stray fighters from Rusich, who are reported to have briefly established themselves under Viking’s command after the murder of their previous commander Alexander “Batman” Bednov in early 2015.

According to the SDD, Sosonny now commands the Oryol battalion, responsible for operations in the Kharkiv area.

In images posted by the SDD in early May, Sosonny and Borodai can be seen studying a map of the Slobozhanske area, located near the above geolocated camp.

Whether they remain there now is not known. Tracking them to that location, however, was not especially difficult.

That might be because these armed formations aren’t actually trying to keep their activities secret at all.

Pavel Luzin, the Russian military analyst, told Bellingcat that groups like the SDD – much like Ramzan Kadyrov’s Chechen fighters – may be in Ukraine at least partly for PR reasons.

“So, the SDD together with other mercenaries are aimed to balance the armed forces and the officer corps from posing a potential political threat for the Kremlin”. 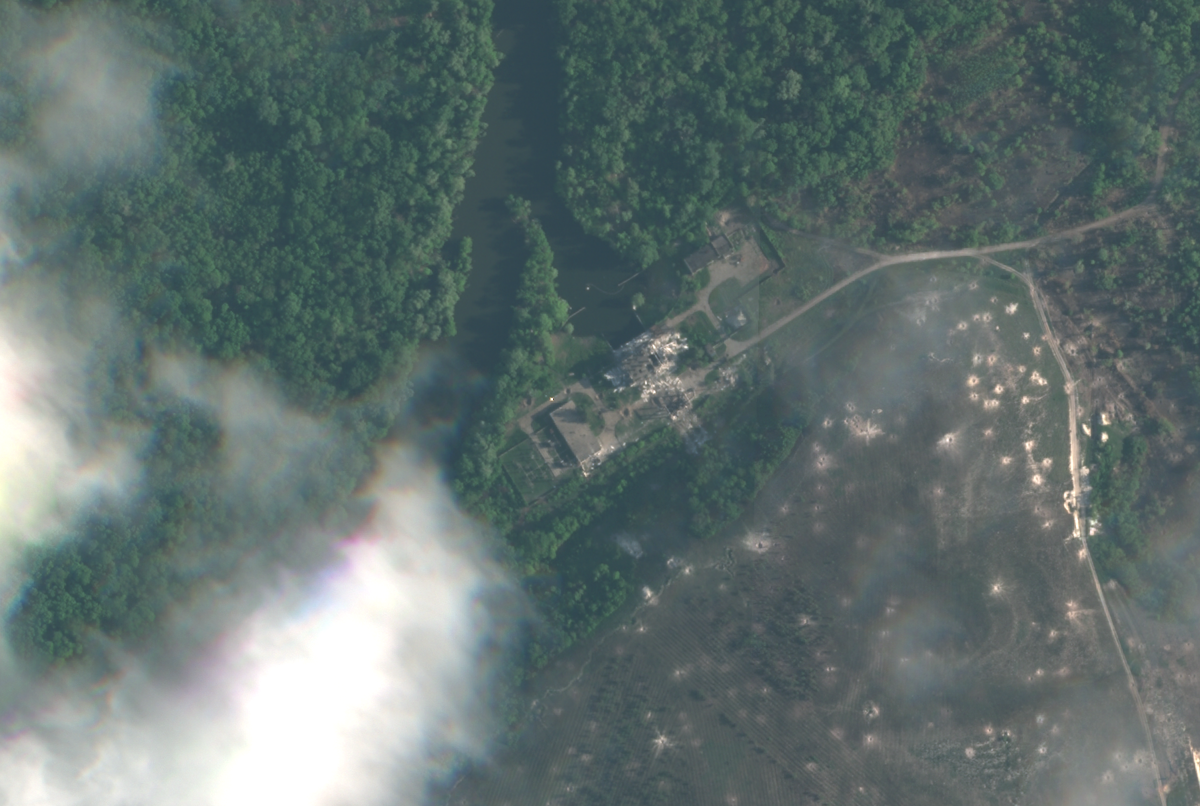 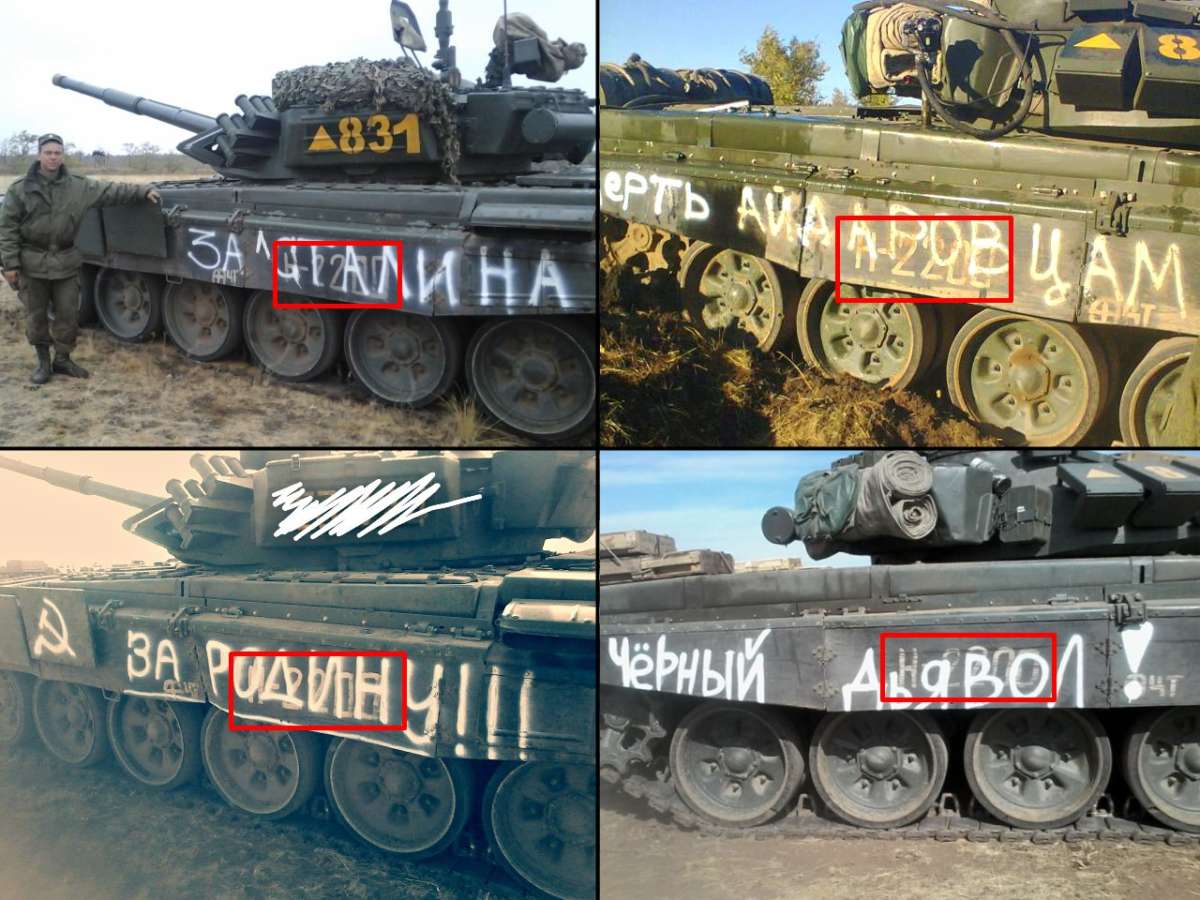