Bellingcat has established that the GRU operation which Czech authorities have linked to the explosion of the munition depot in Vrbetice on 16 October 2014, involved at least six operatives from GRU’s Unit 29155. It was supervised personally by its commander, Col. Gen. Andrey Averyanov, a senior deputy to the head of the GRU, who traveled undercover to Central Europe at the exact time of the operation and left back to Moscow mere hours after the explosion. This was one of only two known clandestine operations for which Gen. Averyanov has personally traveled abroad, indicating the significance of this subversive mission for the Russian government. Gen. Andrey Averyanov is a high ranking military official who, based on telephone call records reviewed by Bellingcat, has a direct line of communication to both the chief of the GRU chief and to the Kremlin.

The operation also involved at least two GRU officers who traveled under diplomatic cover to Budapest, a roughly five hour drive from the munitions depot, shortly before the explosions. Notably, at least one of the same diplomats traveled to a region within a similar range of Bulgaria’s capital several months later, during the days that Emilian Gebrev was poisoned with a chemical weapon by the members of the same GRU unit.

Travel data discovered by Bellingcat also points to the fact that the operation was initially likely planned for an earlier date, but was postponed by about one week due to unknown circumstances. The operation appears to have involved several coordinated trips of members of unit 29155 to Czechia via neighboring countries, as well as a preparation mission in Switzerland.

On 25 September 2014, Maj. Gen. Denis Sergeev and Lt. Col. Egor Gordienko flew from Moscow to Geneva and checked into the Nash Airport Hotel. They traveled under the GRU-issued cover identities of “Sergey Fedotov” and Georgy Gorshkov. Bellingcat would later identify Sergeev as the “third man” in the 2018 Skripals poisoning operation, and both he and “Gorshkov” would travel six months later to Bulgaria to poison Emilian Gebrev, the Bulgarian arms manufacturer.

The morning after arriving in Geneva, Sergeev and Gordienko rented a BMW 116i from Sixt. By the time the two returned the car to the rental agency five days later they had run up 545 kilometers, documents obtained by Bellingcat show. A previous Bellingcat investigation had found that during trips to Geneva, Sergeev’s phone had been in the area of Chamonix, a French alpine resort area 60 km from Geneva. French media later reported that Western intelligence services had discovered Unit 29155 had set up a hidden logistical base here. It is not certain what the purpose of this trip was, but during these days Sergeev communicated actively with his boss – Col. General Andrey Averyanov. Telephone data previously obtained by Bellingcat shows that Sergeev always kept close contact with Averyanov (both men using burner phones) during all of his overseas operations – including during the Skripal poisoning operation.

On 2 October 2014, the commander of the two spies – Gen. Andrey Averyanov – booked plane tickets from Moscow to Lisbon for a flight two days later on Saturday, 4 October. Averyanov was traveling as a tourist under his cover identity of Andrey Overyanov – differing from his real name by only a single letter. It is not clear if the GRU general needed to meet someone in the Portuguese capital or simply needed to enter the Schengen space via the country that had issued a visa to his cover persona. He had purchased an onward ticket from Lisbon to Vienna on 7 October, but did not use it. Instead, later that same day – 4 October 2014 – Averyanov took a flight to Geneva where Sergeev and Fedotov were waiting. He returned to Moscow two days later – 6 October – on a connecting flight via Warsaw.

The next day, Gen. Averyanov and four other members of Unit 21955 reported to work at Khoroshevskoe Shosse 76B, the GRU headquarters in Moscow. All bought tickets for various flights that would place them within a few hours drive of the Czech munitions depot the following week. 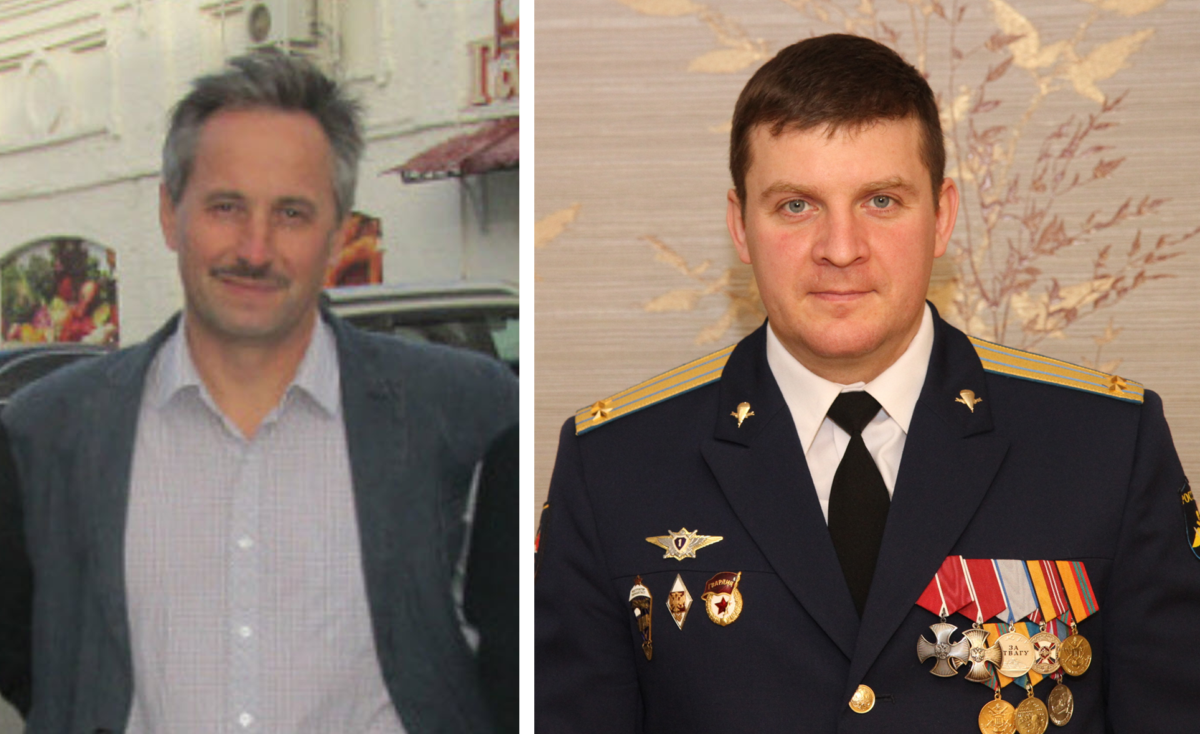 Left: A photograph of GRU commander Andrey Averyanov taken from the Odnoklassniki account of a family member. Right: A photo of Lt. Col. Egor Gordienko.

On 7 October 2014, Gen. Averyanov – again using his passport under the name “Overyanov”, booked an Aeroflot flight to Vienna arriving on 13 October 2014. The return flight was for two days later on 15 October.

At the same time, Lt. Col. Nikolay Yezhov, also a member of unit 29155, bought a ticket to Vienna for 11 October 2014, thus planning to arrive two days before his boss. Like Averyanov, he bought a return ticket on 15 October. He would travel under his alias, Nikolay Kononikhin.

At the same moment, two other members of Unit 29155 – Dr. Alexander Mishkin and Col. Anatoly Chepiga, purchased their own tickets to Central Europe. Like Yezhov, they would fly on 11 October – but to Prague, not to Vienna. They booked their tickets under their fake identities of sports nutrition salesmen: “Alexander Petrov” and “Ruslan Boshirov” – the same personas who would appear as inconvenienced tourists on the RT television channel  four years later. Ticketing data shows that they had not purchased return tickets, leaving their return date open-ended.

Two more members of Unit 29155 also bought plane tickets that morning. Unlike the others, however, they were going to fly under their own names: Alexey Kapinos and Evgeniy Kalinin. Moreover, the two would travel under the cover of diplomats carrying diplomatic mail – on an official trip to the Russian embassy in Budapest. The two officers’ outward tickets to Budapest were for 10 October 2014, and the return, like those of Averyanov and Yezhov, was going to be on 15 October 2014. 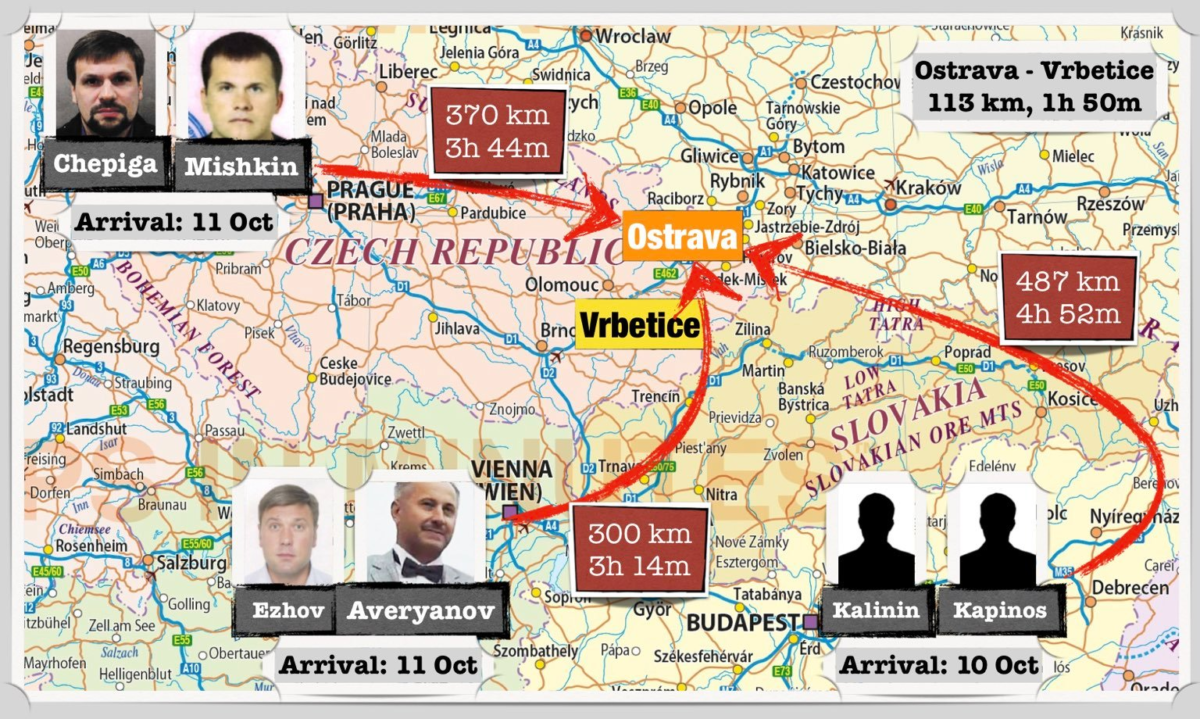 A graphic detailing the movements of GRU operatives in the days before an explosion at an ammunitions factory in Vrbetice, Czechia.

The Pilgrimage to Vrbetice

Over the next few days, the five GRU agents converged in Central Europe. “Petrov” and “Boshirov” landed in Prague on 11 October, checked into a hotel and even posted a photo on social media from the old town center. This post would eventually enable tracking of the pair in the wake of the Skripal poisonings.

At about the same time Nikolay Yezhov landed in Vienna. On 13 October, Yezhov’s boss, Andrey Averyanov, arrived in Vienna. On the same day “Boshirov” and “Petrov” moved from Prague to Ostrava, about an hour’s drive from the munition depot, where they checked into the Hotel Corrado. Phone records show that Averyanov’s phone connected to Austrian networks for only a couple of hours after his arrival on 13 October, and did not reconnect until the afternoon of 16 October. A working hypothesis is that Yezhov and Averyanov drove to Ostrava — just over three hours by car from Vienna — where the two agents reconvened with Mishkin and Chepiga, as well as – likely with the two diplomatic-cover officers Kapinos and Kalinin – to assist in the preparations for planting remote-controlled explosives at the Vrbětice depot.

It is not clear yet when and how the GRU team accessed the site of the munitions depot to plant the explosives. As disclosed by Czech police and media, Chepiga and Mishkin, posing as would-be arms purchasers from the People’s Guard of Tajikistan, requested access to the restricted site of the depot for the period 13-17 October 2014 from Imex, one of the major storage operators at the ammunition depot. It is unclear if the two accessed the site via their contact with Imex (representatives of the company say that the two never showed up), or via a different route – including via a different storage operator. However, at 9:25 am on 16 October 2014, ammunition depot No.16 in Vrbetice exploded, destroying 58 tons of ammunition, erasing buildings and killing two employees of the Imex-run storage facility. 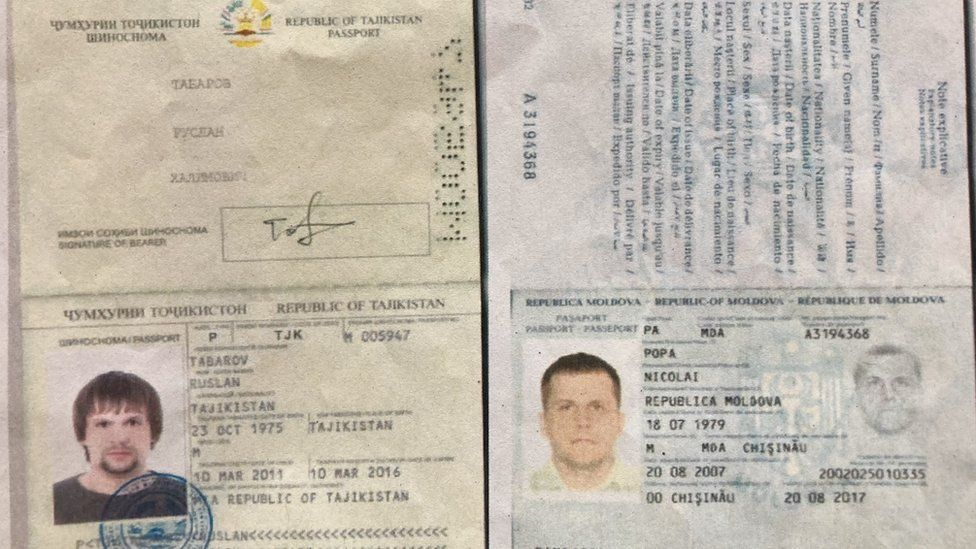 Passport photos used by Mishkin and Chepiga to register their interest in visiting an arms depot in Vrbetice.

Minutes after the ammunition depot in Vrbetice exploded, Anatoly Chepiga and Alexander Mishkin boarded their Aeroflot flight from Vienna to Moscow. The Aeroflot flight took off at 10:05 am.

The other two GRU officers, Gen. Averyanov and Lt. Col. Nikolay Yezhov drove back to Vienna later that day, and went straight to the airport. Averyanov — who had missed his return flight the previous day — bought a new ticket at Vienna Airport at 6:17pm, flying back to Moscow at 10:46pm that evening.

Nikolay Yezhov, who had also missed his return flight a day earlier, did not fly back to Moscow for several days. He stayed behind in Austria, and made several tentative bookings for a return flight between 27 October and 2 November, ultimately flying back to Moscow on 3 November 2014. At this point we have no information if he stayed in Austria or returned to Czechia during this period.

Bellingcat’s findings in this initial investigation on the explosion of the Czech ammunition depot in 2014 corroborate the statements by Czech authorities that link GRU’S Unit 29155 to the 2014 explosions. They also paint the picture of a much more sophisticated operation than previously thought, involving not only at least six undercover GRU officers but appearing to require the direct participation of the commander of Unit 29155, General Averyanov. Senior intelligence commanders of this rank do not routinely travel undercover due to operational risks, and our analysis of travel data shows that Averyanov traveled only on one other mission, in 2015, under cover identity.

The direct involvement of Gen. Andrey Averyanov also closely implicates the political leadership in Russia. Averyanov is not only a senior commander in Russia’s military intelligence who – based on telephone data analyzed by us – reports directly to GRU’s director. He also communicates directly with the Kremlin, including – as identified from Averyanov’s call records – with the office of Foreign Minister Lavrov, with whom he communicated repeatedly before and in the aftermath of the Skripal poisoning.

Notably, the scope and importance of the operation to the Kremlin appears underscored by a number of military awards bestowed to members of the unit who took direct part in the immediate wake of the mission. We have previously reported that Alexander Mishkin and Anatoly Chepiga were awarded Russia’s highest military award in December 2014, other members of the team including Gordienko and Yezhov were awarded other military awards at about the same time, leaked documents reviewed by us show. These circumstances taken together imply the importance of this operation to Russia’s military and political leadership, as well as its perception of the mission as a success.

In a further report we will analyze the likely motives for this operation as well as its links to the subsequent poisoning of three Bulgarian citizens in 2015.

This investigation was in conducted in partnership with The Insider, Der Spiegel, and Respekt.cz

Christo Grozev and Yordan Tsalov served as the primary researchers for Bellingcat.