On December 8, 2020, over $500,000 worth of bitcoin was sent to various alt-right figures and causes. Some extremists took this donation as evidence that the “Bitcoin Fairy” had returned.

The Bitcoin Fairy is an element of far-right folklore dating back to an anonymous $60,000 bitcoin donation made after the now infamous “Unite the Right” rally in Charlottesville in 2017.

Like the mysterious creator of bitcoin, Satoshi Nakamoto, the true identity of the Bitcoin Fairy is shrouded in mystery. In January 2021, however, research firm Chainalysis and Yahoo News unmasked French programmer Laurent Bachelier as the December 2020 mega-donor.

Bachelier, who the Wall Street Journal reported had lamented the decline of western civilization in online postings, committed suicide on December 9 and his donations appear to have been among his final acts. But could Bachelier also have been the mysterious 2017 donor, and thus the Bitcoin Fairy, as well?

In short, it’s impossible to definitively say. An analysis of the transactions, however, show significant differences in how the 2017 and 2020 donations were made. According to experts Bellingcat has spoken to, this suggests it’s extremely unlikely Bachelier was the Bitcoin Fairy of 2017 fame. Yet that hasn’t stopped speculation from some far-right figures that he was.

How the Myth Began

On August 20, 2017,  an unknown benefactor donated 14.88 BTC, or roughly $60,000, to the Daily Stormer, a neo-Nazi news website based in the US. Not only was the dollar value significant, but also the chosen digits — 14 referencing a Nazi slogan about protecting “a future for white children,” and 88 being shorthand for “Heil Hitler” given “H” is the eighth letter of the alphabet.

Just weeks after the shocking violence that marred the Unite the Right Rally in Charlottesville, some media outlets would go on to describe bitcoin as a “boon for extremist groups.”

Not much more has become known about the identity of the 2017 donor, although researcher John Bambenek did discover that the money was connected to a larger bitcoin wallet that is now worth upwards of $100 million.

According to Chainalysis researcher, Valeria Kennedy, the individual responsible for this donation was an early bitcoin adopter who had either mined the crypto on their own or traded directly with someone who had mined them.  These methods would leave virtually no paper trail or disclosure of personal information — all but completely anonymizing the donor’s identity.

Unsurprisingly, alt-right groups and personalities have continued to solicit donations of bitcoin in recent years. Yet few received as much as the Daily Stormer did in the August 2017 transaction.

That is, until December 8, 2020, when over $500,000 in bitcoin was donated to a smattering of over 15 different alt-right causes and figures. The largest beneficiary by far was alt-right podcaster Nick Fuentes, who received roughly $250,000. Video hosting platform Bitchute, a haven for extremist content creators kicked off of Youtube, received the next largest donation at two BTC, or over $60,000. The Daily Stormer, the main recipient of the August 2017 donation, also received one BTC, or roughly $30,000.

On December 13, 2020, a thread on Ruqqus, an anti-censorship platform popular among the alt right which also received money, began to dissect the transaction specifics noting those that had received the funds. 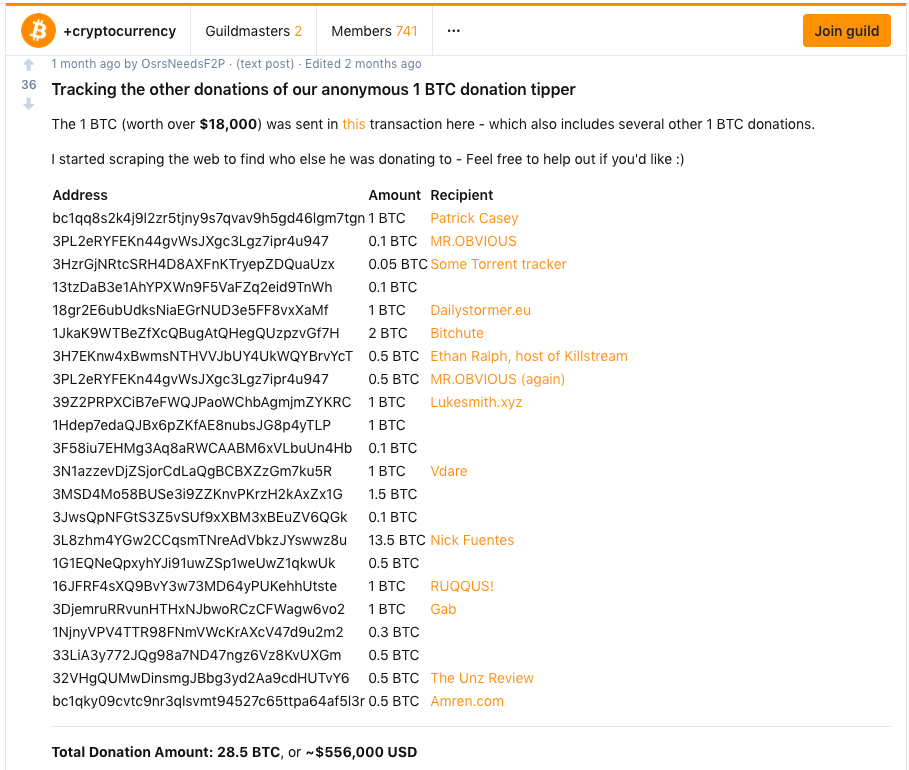 A screen grab of a thread detailing recipients of bitcoin donation worth more than $500,000 captured from the Ruqqus platform.

As word of the donations spread, popular far-right blogger Hunter Wallace announced the “reappearance” of the Bitcoin Fairy and posited that whoever was responsible for the Charlottesville transaction was also behind the early December donation.

A similar theory was discussed and linked to by Wallace – whose real name is Bradley Griffin, according to research by the Southern Poverty Law Center – on well-known far-right podcast Radio Free Indiana as well. Wallace initially appeared unhappy about the donation and speculated it was a conservative astroturfing initiative. 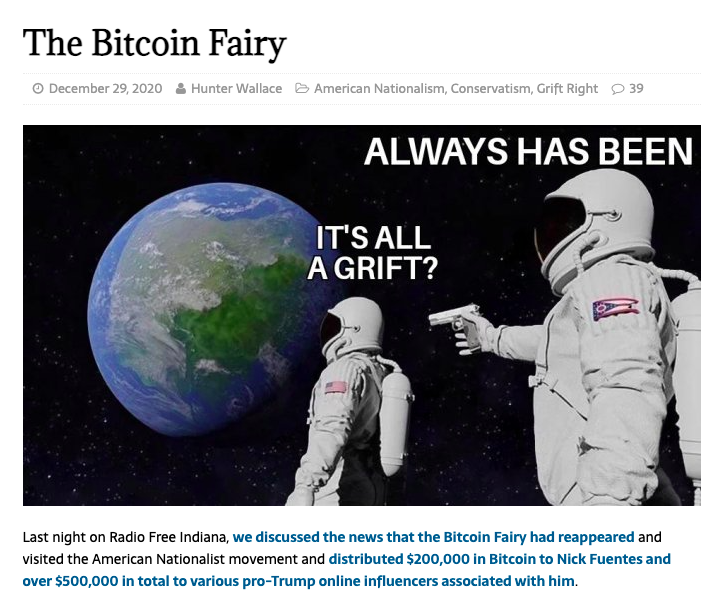 A screen grab of an article written by far-right blogger, Hunter Wallace, on the Occidental Dissent website.

Several weeks later, however, Chainalysis and Yahoo News uncovered Laurent Bachelier’s identity as the December 2020 donor, doing so by connecting one of the bitcoin addresses associated with the $500,000 donation to an old NameID profile Bachelier kept.

NameID is a website that lets users post a profile connecting their bitcoin addresses to their names and email addresses if they so wish. Bachelier’s profile included an email address that Chainalysis investigators were then able to use to find Bachelier’s online blog, where he posted his suicide note and took ownership of the donation.

When Bachelier’s identity became known, the far-right blogger, Wallace, then claimed in a post that Bachelier was the Bitcoin Fairy.

Yet the finer details of the 2017 and 2020 donations appear to tell a more complicated story.

The August 2017 donor attempted to send the money to the Daily Stormer by utilizing over two dozen “go-between” wallets to funnel the 14.88 BTC over many weeks. Such techniques are typically used to attempt to obfuscate the origin of funds. The graphic below shows the lengthy chain of wallets that the 2017 donation passed through before ending up with the Daily Stormer (click to expand image).

A graphic detailing a chain of wallets that bitcoin funds passed through before reaching the wallet of the Daily Stormer in 2017 (Credit: Chainalysis)

On December 8, 2020, however, Bachelier utilized an entirely separate network of wallets to transfer the money from his possession to the numerous causes in a matter of days and employed only two “go-between” wallets to transfer the funds. Bachelier’s technique was direct and there was virtually no attempt to hide the origin and destination of his funds, as can be seen in the far simpler chain of wallets below (click to expand image). 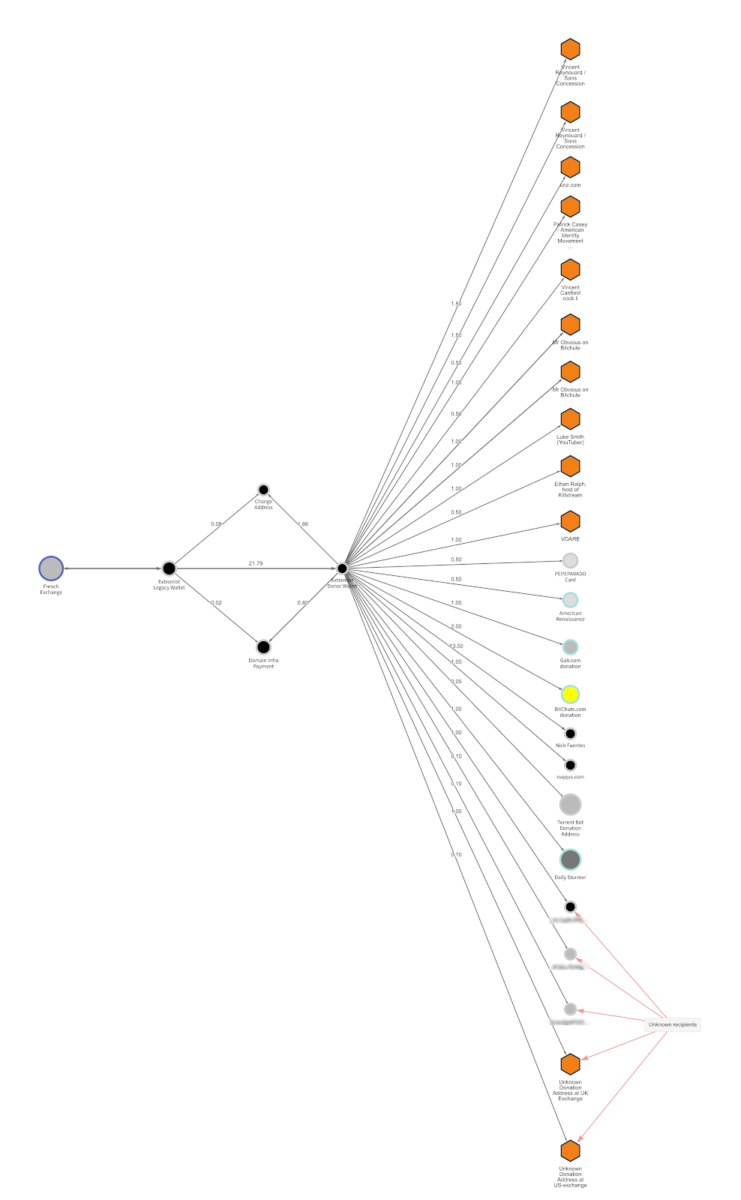 A graphic detailing the far smaller chain of wallets (left) Laurent Bachelier’s bitcoin donation traveled through before being dispersed to a number of far right figures and groups (Credit: Chainalysis)

Bachelier also used this wallet network consistently between 2013 and 2020, according to Valeria Kennedy of Chainalysis, who added that the network employed a completely different set of crypto-services whether that be exchanges, mixers, or other marketplaces than the 2017 donation.

According to John Bambenek, crypto-users, like most people, are creatures of habit and operate in “predictable patterns.”

Bambenek added: “Looking at not just those two transactions but the history of the wallets and the behavior behind” them exhibits two very different patterns “that would be very atypical to be the same person.”

Furthermore, the network of wallets used for the 2017 donation has shown no movement or transactions since then.

Both Bambenek and Kennedy acknowledged that it is impossible to rule out that Bachelier may have utilized completely different wallet networks, crypto services, and transaction patterns to conduct both donations. But both make clear they believe such a scenario is extremely unlikely.

To them, the identity of the 2017 donor remains a mystery.

While there may be some far-right figures who believe they have discovered the identity of the original Bitcoin Fairy, there appears to be little evidence to suggest that they have.