A note on the UK Arms project: This article forms part of a series of investigations that will look at the export of UK arms and security equipment. It has been produced by Bellingcat, Lighthouse Reports and their media partners, Sky News and The Guardian. Investigators involved were Leone Hadavi, Benjamin Strick, Annique Mossou, Pieter van Huis, Eric Woods, Ross Higgins and Ludo Hekman. Part one looked at sniper rifles sold by UK arms companies. Part two, featured here, will focus on equipment used by US police at recent Black Lives Matter protests. Part three will explore the sale of recoilless rifles used by Saudi Arabia in the ongoing Yemen conflict.

These investigations are part of the larger EUArms project initiated by Lighthouse Reports, which looks to document and track how EU-manufactured weapons are used. The project has set-up newsrooms in eight major arms exporting countries and, thus far, investigated close to 100 export agreements. You can read more about the EUArms project here.

Open source evidence has shown that UK-made equipment was used by police to repress peaceful demonstrations and to harm media covering Black Lives Matter (BLM) protests in the United States.

This is contrary to the findings by a British government review to assess if it should still allow the export of British-made crowd-control kits to the US.

Those findings stated there was “no evidence” that UK-made anti-riot gear was used by American police during BLM protests, although there was a “possibility” it had been given the wide number of end users for such products across the US.

This article will detail how open source information helped us identify UK anti-riot equipment in the hands of US police at BLM protests, as well as how it was used.

While anti-riot gear is designed to be used for protection, the UK follows rules and laws that ostensibly aim to prevent export licenses being granted for such products when there is a risk recipients would use them for internal repression.

Earlier reports on the use of UK made security equipment by US police by our media partners on this project, The Guardian and Sky News, can be seen here and here.

In June this year, Australian prime minister Scott Morrison called for an investigation into the violent treatment of two journalists from the country’s Channel 7 broadcaster by US Parks Police as they were covering BLM protests in front of the White House.

The specific incident was covered widely by media in the US and beyond and can be seen in the video below.

Watch the shocking moment #7NEWS reporter @AmeliaBrace and our cameraman were knocked over by a police officer LIVE on air after chaos erupted in Washington DC. pic.twitter.com/R8KJLnfxPN

An alternative angle of the footage posted to Twitter shows the strike more clearly.

SHOCKING: to see members of the media also taking direct, *intentional* punches and swings from police as they cleared the streets of protesters outside the White House. #protest #Washington #WashingtonDCProtest #PictureOfTheDay pic.twitter.com/7zR154O6Jg

It is evident that a shield was used by a member of the police to violently confront the cameraman. A frame of the strike can be seen here.

Footage from seconds before the attack shows police lined up in a row. Here, we can see the shields more clearly with some of their defining features. 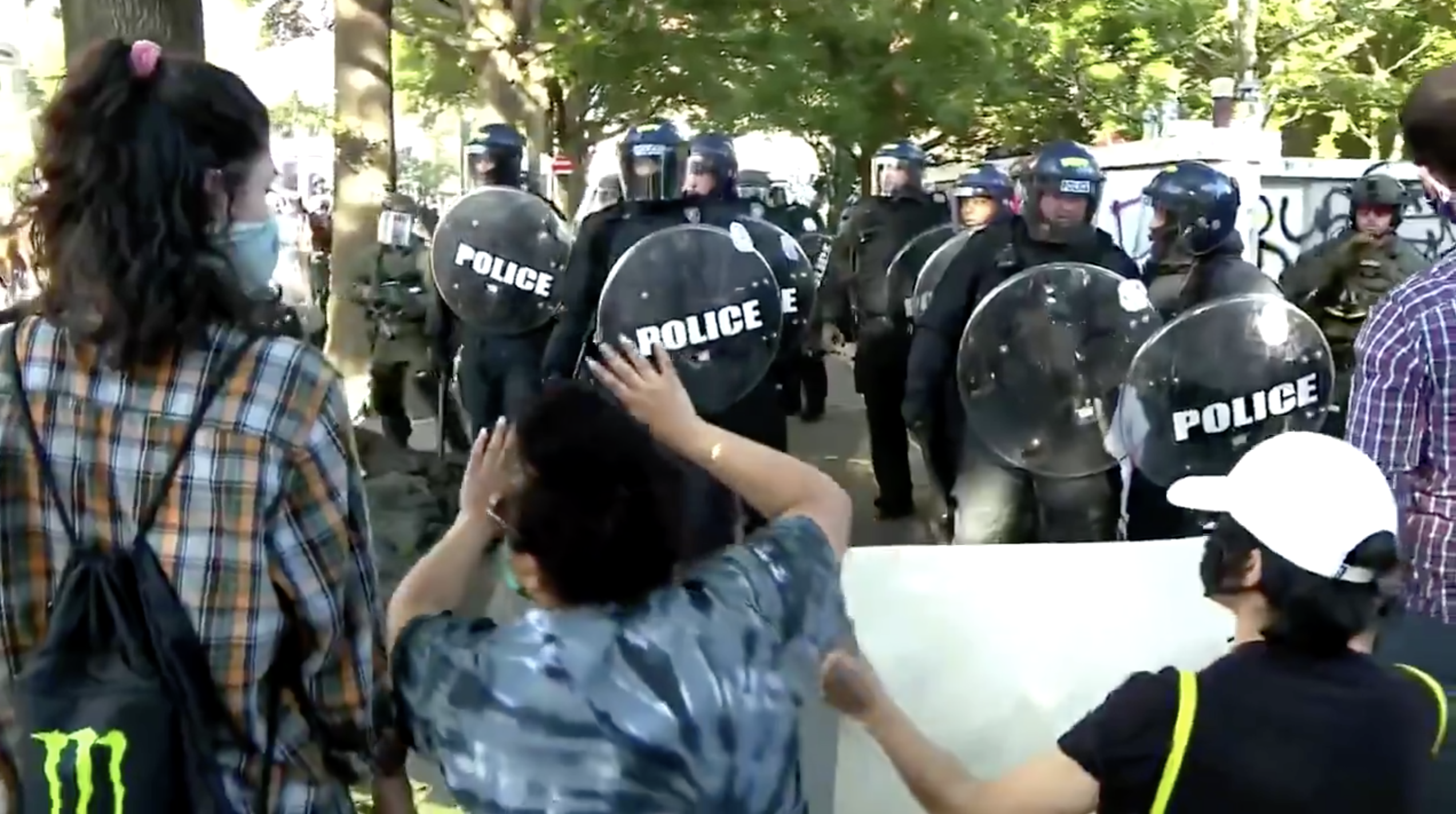 US media later reported that two officers were being investigated following the incident.

Another video from later in the same evening appears to show another police officer charge towards a BBC News cameraman, again aggressively confronting a journalist with the same type of shield.

Footage of that attack can be seen below.

This was before curfew and our cameraman @p_murt clearly a member of the press, a block away from the White House this evening… pic.twitter.com/X7oQqZm8eW

In the following two frames we can see the moment police charged at the press team and struck with the shield. 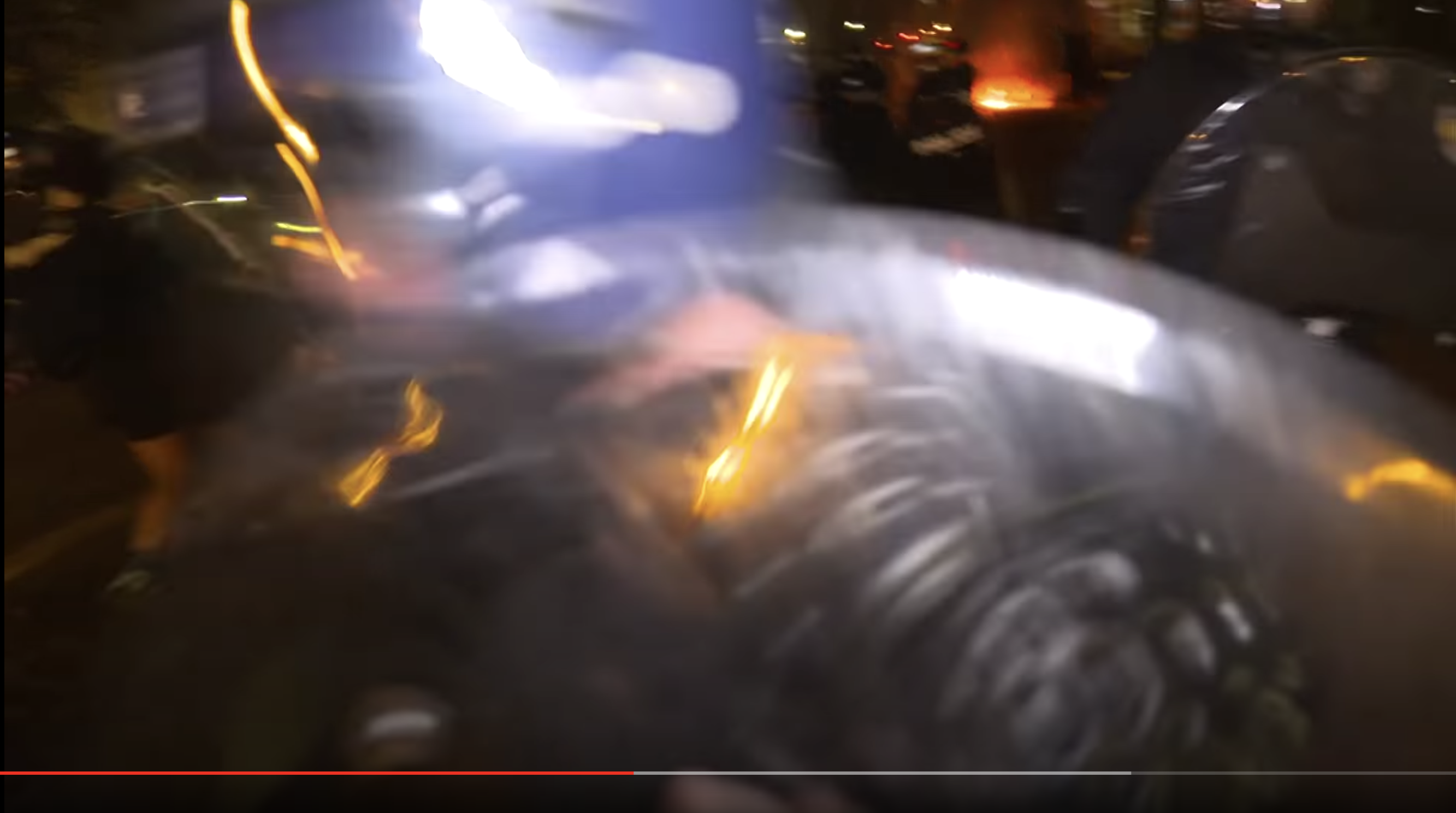 We also found images from nearby earlier on the same day where police officers lined up as US President Donald Trump walked past.

The same shields can be seen in that image.

President Trump pumps his fist as he walks between lines of riot police in Lafayette Park across from the White House while walking to St John's Church for a photo opportunity during ongoing protests. More photos from Washington: https://t.co/latl1eCZTE 📷 @tombrennerphoto pic.twitter.com/qlkVltyXKR

These shields are exclusive through their design, bolt fittings, backing, labels and shape. We found this shield present not only in Washington DC, but in Salt Lake City, Utah, where a police officer appeared to shoot at a protester with an unidentified less lethal munition (LLM) from close range (visible in the second clip below). The shield can be seen hanging from the belt of the police officer who fired the weapon.

A screenshot from this video shows the shield clearly. 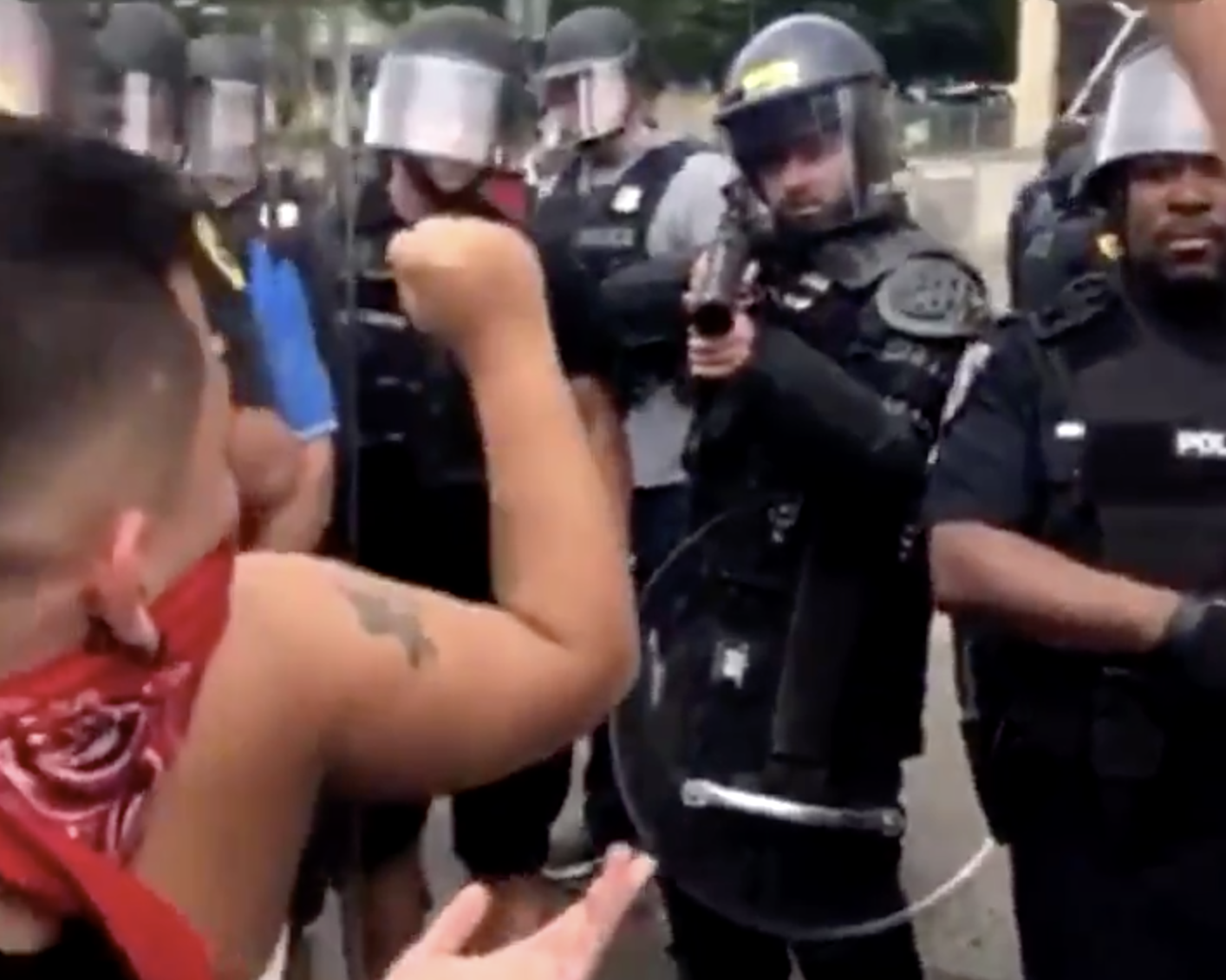 Specific branding on the lower half of the shield is visible in high-resolution photos and allows us to identify the manufacturer.

Close-up images of the shields show specific wording of the branding, and the logo, on the lower half of the shield pic.twitter.com/l38LrmIo7a

The branding is that of Scorpion PPE. The logo is a clear match to that on the company website which operates under the domain DMSprotective.co.uk. The “about” page on the website describes how a company named DMS Plastics is well known for its range of Scorpion personal protective equipment. 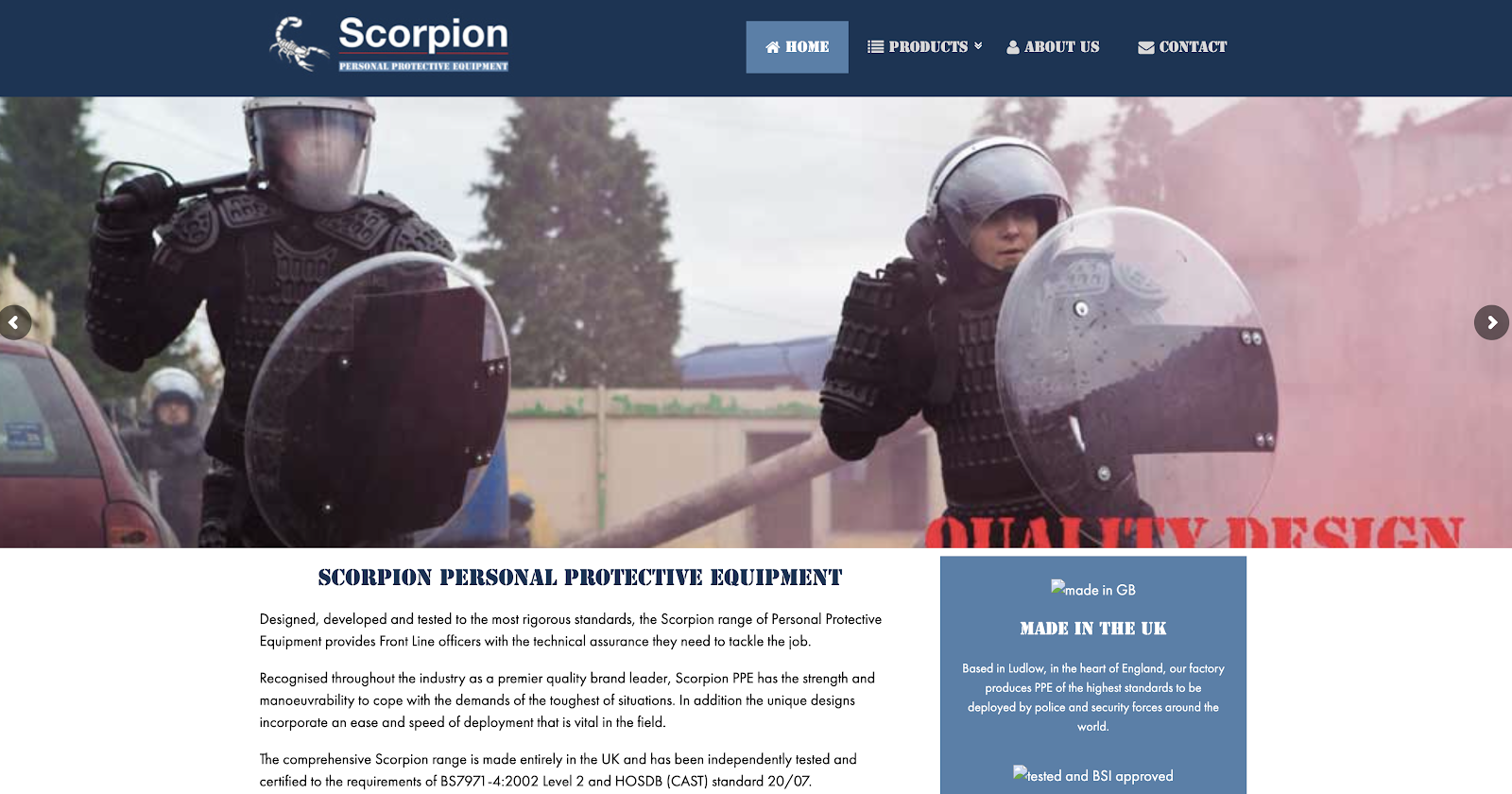 The website also provides that “Scorpion range is made entirely in the UK.”

There is no suggestion of illegality or wrongdoing on behalf of DMSProtective or Scorpion PPE in selling or exporting equipment to the US.

But the way in which we have documented the shields being used would appear to raise questions about whether the export of such products should continue to be approved by UK authorities. Under Criterion 2 of the UK Consolidated Criteria (Consolidated EU and National Arms Export Licensing Criteria), meanwhile, the UK commits that it will “deny an export licence if there is a clear risk that the military technology or equipment to be exported might be used for internal repression.” This commitment was highlighted in a letter signed by 166 MPs in the UK in June which stated that the government “is bound by law to freeze export of all policing and security equipment to the US where it could be misused.”

The UK government confirmed in written correspondence with the law firm, Deighton Pierce Glynn, in July that officials in the Export Control Joint Unit (ECJU) carried out an assessment as to whether exported crowd control equipment could have been used for “internal repression.”

Yet, the letter stated, they found “no clear risk” that it was and it would not “suspend, amend or revoke existing licenses” even though the government admitted it was possible UK-made equipment could have been used by US police given the wide variety of end users for such products in the country.

This appeared to tally with comments from the UK’s minister for international trade, Ranil Jayawardena, in response to a written parliamentary question on June 17.

What we can take from this is that there are still live UK licences for this type of equipment and that the country is processing pending licences, after actively considering and dismissing concerns around the protests.

In its letter to Deighton Pierce Glynn, the UK government also stated that there was a high threshold for “internal repression” as described in Criterion 2 of the Consolidated EU and National Arms Export Licensing Criteria and that this may “not necessarily capture policing tactics that might be deemed to be heavy-handed.” The recipient country’s attitudes towards human rights must also be considered in applying the clear risk threshold in Criterion 2, the letter added.

Again, though, this response was sent before clear evidence highlighting the use of UK made security equipment against media and attendees at BLM protests in the US came to light.

Final note on the arms export licensing for the UK

These findings establish that there is clear visual evidence that equipment licenced by the UK was used by law enforcement during BLM protests in the US.

The equipment was Scorpion anti-riot shields, which are subject to the UK’s arms export control regime. When assessing an export licence, there are obligations the UK Government must consider its own rules and laws, including on internal repression.

When contacted by Sky News, a partner in the UK Arms project, the UK government said: “We consider all our export applications thoroughly against a strict risk assessment framework and keep all licences under careful and continual review as standard. This, of course, applies to our exports to the US.

“The UK takes its export control responsibilities very seriously and operates one of the most robust and transparent export control regimes in the world. We rigorously examine each export licence application on a case-by-case basis against the Consolidated EU and National Arms Export Licensing Criteria”.

Park Police told Sky News that they followed “established procedures” and that all use of force complaints were being investigated. They also stated that 50 of their officers were injured during the protest.

The West Valley Police Department in Utah told the Guardian that its officers used Scorpion shields. They added that the officer who fired an LLM at a protester only did so as the protester was holding a bat that was not visible in the video.

Lawyers representing DMS told the Guardian that it could not be held responsible for any misuse of its personal protective equipment.