France’s far-right National Front calls for French unity and strength. But the party’s history reveals a much deeper web of foreign interests and fraud, which threaten to compromise its entire doctrine.

Marine Le Pen’s French far-right party, the National Front, has experienced its most successful period in party history. Regional elections placed the party in 1st place with 28% of all votes, and various polls have shown Marine Le Pen leading the first round of 2017 presidential elections.

The National Front’s recent victories – doubtless a result of panic and hysteria caused by recent refugee crises, increased liberalization of the European Union, and various terror threats across France and Europe – overshadow its second most prosperous period in history, under Le Pen’s father, Jean-Marie. The party has secured a portion of the electorate at least 20% larger than in the 1986 legislative elections, where it won 35 seats in the National Assembly.

For much of its history under Jean-Marie Le Pen, the National Front pursued a doctrine of nationalism, anti-immigration, and xenophobia. Although holding a marginal and almost irrelevant position in French politics, the elder leader secured a consistent voting base through use of inflammatory remarks and policy motions. Jean-Marie Le Pen expressed a certain admiration for the Nazi occupation of France, and even downplayed the Holocaust by questioning the death count of Jews in gas chambers – a statement for which he received nearly €183,000 in fines under the 1990 Gayssot Act.

But following an internal shakeup leading to Jean-Marie Le Pen’s departure as party president in 2011, his daughter took the reigns, and immediately pursued a policy of normalization and public relations designed to fix the National Front’s image throughout France.

Under Marine Le Pen, the National Front has rebuked many of its extreme policies, instead favoring a more measured approach to public politics. But despite Le Pen’s shakeups, the National Front remains one of the strongest proponents of nationalism and far-right values in France.

Like most European nationalist parties, Le Pen’s National Front claims to support the interests of France. It seeks a return to national unity, general economic and social isolationism, and de-globalization, and harshly critiques the globalist policies of the European Union as degrading the integrity of France. 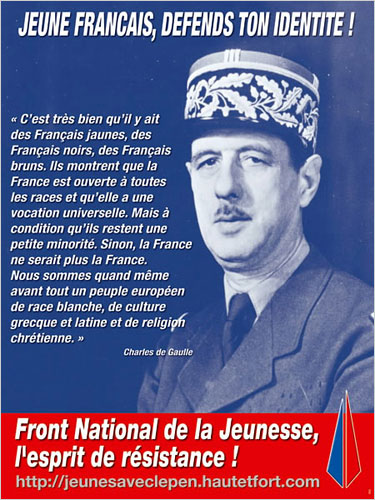 A National Front poster circulated under Jean-Marie Le Pen, using Charles De Gaulle’s image to insist that immigrants remain marginalized. “We are, at the end of the day, a European people with a white race, a Greek and Roman culture, and a Christian religion.”

But despite these strong statements of French unity and nationalism, the National Front has conflicting interests – interests which threaten the party’s integrity, and the core of its message.

The party has faced investigation numerous times, both under Le Pen and her father, for campaign finance issues and fraud.

In March of 2015, the European Parliament launched an investigation into the National Front’s financial dealings over allegations that it had illegally paid €7.5 million to parliamentary assistants without the knowledge of the European Union. Le Pen quickly hit back, claiming that she would file a “formal complaint” as a result of the Parliament’s investigation into her party.

In September of 2015, it was announced that the National Front would face charges of electoral fraud and misuse of assets over allegations that the party defrauded the state by inflating campaign expenses for its 2012 elections. Again, the National Front pleaded its innocence, but French prosecutors are moving forward with the case.

Most concerning, however, are the National Front’s – and Marine Le Pen’s – ideological, fiscal, and political connections to the Russian Federation.

Since seizing power in 2011, Le Pen has pursued a subtle policy of Russian alignment. She is strongly outspoken in her support of President Vladimir Putin, and critical of what she calls the West’s “demonization” of Russia.

“I am surprised a Cold War on Russia has been declared in the European Union,” she told colleagues at the meeting [with Duma speaker Naryshkin]. “It’s not in line with traditional, friendly relations or with the economic interests of our country or EU countries and harms future relations.”

Le Pen has also been outspoken in her support of Russia’s role in Syria, and of Syrian president Bashar al-Assad.

“Russia’s actions in Syria these days show precisely what France should be doing. In other words, to spearhead the initiatives being taken in relation to that country,” Le Pen said. “Whatever criticism may be addressed to Bashar Assad, his government is the real one and it protects the country from IS barbarity.”

Earlier, Le Pen expressed her strong disapproval of any French action in Syria. “The interests of France are not affected, therefore we should not intervene,” she was quoted as saying in an interview with French news weekly L’Express.

The National Front’s connection to Russia is more than just political. In late 2014, the party received an $11.7 million loan from the Moscow-based First Czech-Russian Bank, while around the same time Le Pen’s father received a $2.5 million loan from a former K.G.B. agent – Yuri Kudimov – who formerly ran VEB Capital, the financing arm of the Kremlin.

It’s little coincidence that Russian financing of the National Front – and the party’s alignment with the Kremlin – came just months prior to campaigns for the 2015 French departmental elections. Russia has pursued a furiously aggressive foreign policy in recent years, culminating in two major geopolitical moves: the invasion of Crimea and military support for Assad in Syria’s bloody civil war. Putin has motioned to secure his power base both at home and abroad, and has expanded Russian foreign interests on an almost unprecedented scale since the collapse of the Soviet Union in 1991.

Now, Putin is playing European politics, and his alignment with Le Pen and the National Front represents a larger attempt by the state to gain supporters in a Western sphere of influence laden with anti-Russian sentiment and hostility.

Putin’s support of the National Front comes at a convenient time for Russia, as well. Amid European and U.S. sanctions over Russia’s invasion of Crimea, which have plunged the country into a painful economic recession, Putin is struggling to find allies and alleviate the threat of Western pressure towards Russian interests.

But Russian interests don’t necessarily align with the interests of the European Union, and Putin’s support of the National Front exposes a latent hypocrisy behind the party’s core values of nationalism and unity.

Like her father before her, Le Pen is disinterested in the message her party sends to the French people, and French voters should be wary of the her campaign promises and domestic political propaganda. While Le Pen preaches a certain message of nationalism at home, her involvement with Putin and Russian interests give way to a more dangerous message: the National Front is willing to do business with the Russian state, and more than happy to serve as a French bureau for Putin’s complex agenda.

As Putin pursues a policy of backdoor diplomacy with the European opposition, Le Pen and others may soon see their values hijacked by a foreign state with no interest in European unity – and in fact, no interest in European strength. And if Le Pen continues her fervent support of Russia, she may ultimately see her party – whether in power or not – become a rather willing hostage to Putin’s anti-EU, anti-humanitarian policy abroad.