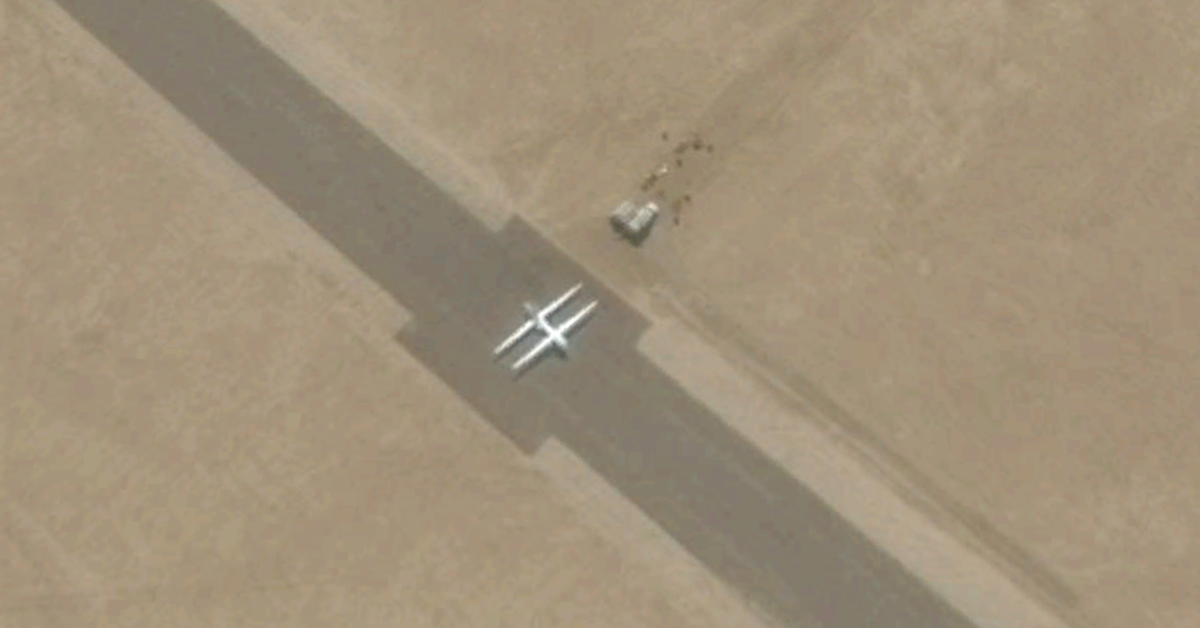 When the US denied the sale of armed Predator drones to fulfill UAE Air Force requirements in 2002, the Gulf country set out to fill the gap by developing its own medium altitude long endurance UAV. Local target drone manufacturer ADCOM Systems took up the challenge and has helped further develop the UAE’s defense industrial base with its United 40 model.

Satellite imagery from DigitalGlobe shows the UAE testing the United 40 block 5 at the company’s remote desert airstrip 30 miles outside of the heart of Abu Dhabi. Imagery from November 2014 captured the UAV along with the associated ground control station integrated in a van parked nearby.

Historical imagery suggests the 600 m long airstrip was paved a year prior — possibly in preparation for test and evaluation. Company video of the block 5’s maiden flight from March 2013 appears to match this airstrip.

One of the latest in the series, the block 5 was first displayed at Abu Dhabi’s International Defense Exhibition (IDEX) 2013 after a similar showing of a previous variant at IDEX 2011.

The block 5 preserves the unusual biplane configuration, though with some significant changes. Most notably, the block 5 swaps the aft fuselage-mounted single push propeller for twin-engine props positioned forward under-wing. The two 115 hp engines and 17.5 meter-long high aspect ratio wings allow the drone to carry payloads up to 1050kg — which includes the weight of two electro-optical cameras and optional synthetic aperture radar.

Like the previous version, the block 5 features an internal rotary launcher which contains six precision guided bombs, for a possible ten when including rear under-wing carriage. ADCOM reports the UAV has a maximum cruise speed of 220 km/h and a flight ceiling of 8,000 m. The company also claims a flight endurance of more than 100 hours. Unlike western counterparts, operators manning the associated ground control station can only pilot two of the UAVs at one time. 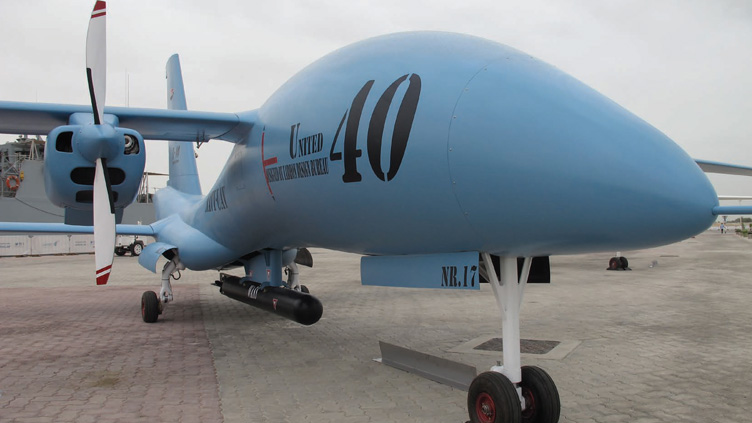 Keeping with previous trends, the company revealed a new naval variant, the block 6, at this year’s IDEX 2015 which took place last month. Developed with Italian manufacturer Finmeccanica and its subsidiary Whitehead Alenia Sistemi Subacquei, the platform now takes on the anti-submarine warfare mission fitted with sonobuoys and a single lightweight torpedo mounted center on the fuselage. In conversation with IHS Jane’s, ADCOM said the Block 6 could be used to “lay a barrier of sonobuoys”, while loitering overhead for up to 16 hours with its torpedo. With acoustic processing on-board, data is disseminated with other cooperating UAVs or maritime patrol aircraft.

While the company also suggested a few other concept of operations, it is clear the platform is still early in the testing phase. ADCOM and partners said they will continue working on advancing payload integration while planning a torpedo droptest demonstration for the UAE Navy sometime in 2015.

In 2013, the Russian military reported the purchase of two Block 5s with a service entry date around 2016. However, that entry date may have been delayed as Russia postponed the tests of the UAV in February last year. Imagery from November 2014 may have been related to the Russian test—though the company hasn’t confirmed. Beyond Russia, Algeria was considering the purchase of the aircraft for its intelligence, surveillance and reconnaissance requirement. (In 2014, Algeria was also evaluating the China-built Xianglong).

ADCOM has also offered several United 40 systems to the United Nations for use on humanitarian missions. Selex, a subsidiary of ADCOM partner Finmeccanica, also supports United Nations border surveillance missions in the Democratic Republic of the Congo with the Falco system.

Possibly due to a lack of military sales for its flagship drone, teaming with Finmeccanica could have been a strategic move to follow the partner into a new market segment. In a presentation made at the Berlin Airshow 2014, ADCOM reiterated the use of drones for NGOs engaged in wildlife conservation and governments requiring critical infrastructure monitoring.

Despite the build of block 6, the civil and non-military space may become an important area for ADCOM’s future growth.