In September, the discovery of six videos of a Buk convoy in Russia was reported on Bellingcat. During the research done by the Bellingcat team, another 10 videos have been discovered from June 23-25, which can be linked to the same convoy. As the basis for the geolocation work, the previous videos from June were utilized both as reference material, as well as to give indications of a possible route which would narrow down the search area.

At the end of the post, there is a summary map and a table with links to all the locations.

The first video examined here is one with the reported location of Troitskiy. The town can be found east and slightly north of Stary Oskol. One possible route from Kursk to Stary Oskol would take the convoy down P190 which passes through Troitskiy, making this a possible match. Looking at maps and overhead satellite imagery, it can be seen there are not too many intersections to check. One location in particular has matching features, and jumping into Street View confirms the match.

The second video is an important one, because it provides a lot of detail on many of the convoy’s vehicles, including clear view of the license plates. The video’s description places it in Stary Oskol, and the video provides many landmarks to make the process of locating the video easier. A few such landmarks are the overpass, car dealerships and light rail track. These place the video on P188, which runs through the city.


Next, we have a video from YouTube, which doesn’t include location information. It also includes only a single Buk TEL (Transporter Erector Launcher) vehicle, so the link to the bigger convoy also needs to be established. This can be done by looking at the unique markings on the Buk TEL itself, as well as the trailer it’s on. The TEL has paint scratched off in a pattern that matches a TEL seen in our previous video. There are also missiles loaded on both units, the markings and sticker placement on trailer match, and based on frame-by-frame analysis of the video from 0:55 to 1:20 the license plate would appear to match as well. 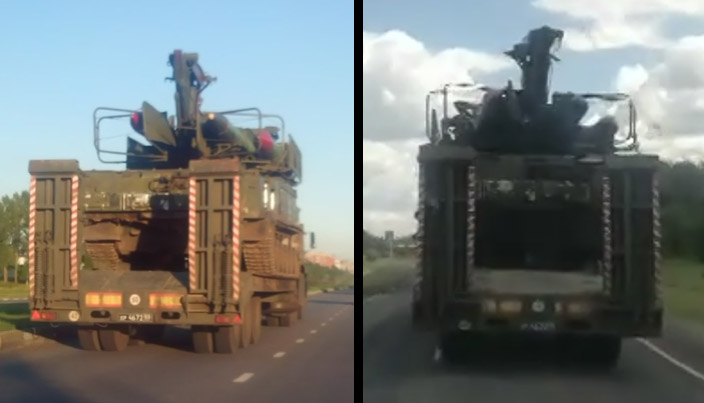 As for the location, the video offers an important clue: a sign on the side of the road. The sign reads “Поповы Дворы”, Popovy Dvory. This can be found to be a location in the Kursk region, leading us to the exact location on road A144 / E38, as pictured below. Above, screenshot from video. Below, Google Street View.

Number four, we have a video again from Stary Oskol. This video is also along the light rail, which means this video locates along the same path as some previous videos.

Above, two screen shots from the video. Below, two Street View pictures from matching location.

The fifth video has been deleted from VK since the Bellingcat team discovered it, but geolocation was done for it based on an archived copy. Based on previous experience, it was thought that the overall appearance of the roadways matches the Stary Oskol region, and further support this was the apparent rail track on the right of the image. Overhead satellite imagery was examined to find possible matches, and a suitable stretch of road was found just north of Neznamovo. Moving along to number six, we have another video from Stary Oskol, of which many copies have been circulating on VK. One of the videos is uploaded June 24th, meaning it’s the likely close to the source, if not the original. The vehicles in this video again match to the other videos of the June 23-25 convoy, down to the license plates. The video is filmed on the same major road from Stary Oskol, as many of the other videos. 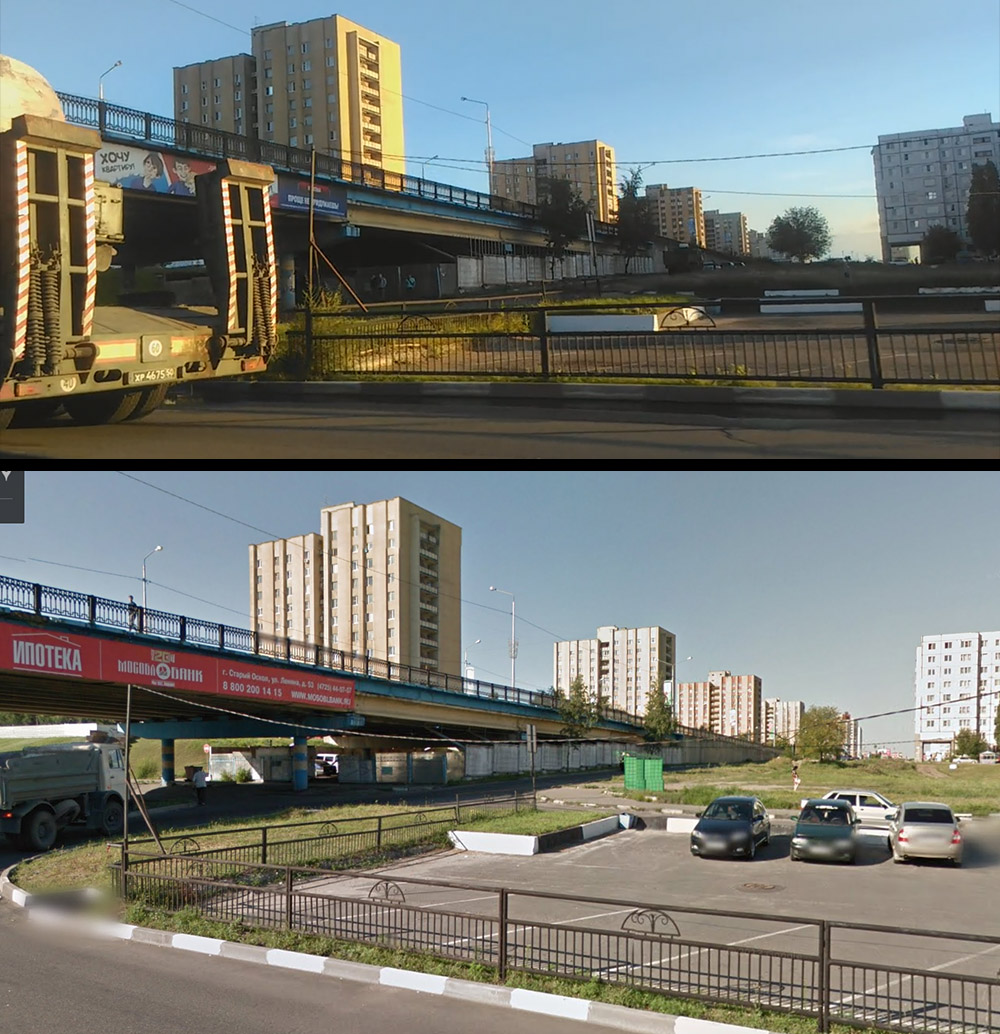 Above, convoy in the video. Below, reference image from Street View. Above, convoy in the video. Below, reference image from Street View.

Number eight is a video from a previously known location. It is showing the convoy vehicles at a turnaround in Alexeyevka, with a familiar building in background from the older Alexeyevka video. In the screen captures below, you can see the back of a DFDS Transport truck on the left, and the front of the same truck at the left edge of the frame in the right picture.

Number nine is another video reportedly from Alexeyevka. The video shows a 3-minute stretch of the same road, giving a good understanding of the overall surroundings, and what kind of road shape to look for in overhead satellite imagery. A suitable search area with matching landmarks was found south of the city, and again it was possible to confirm the location with Street View.

The tenth video is from Millerovo, and is addressed in a separate case study, walking through the geolocation process.

Summing up all the locations, we get the following map: 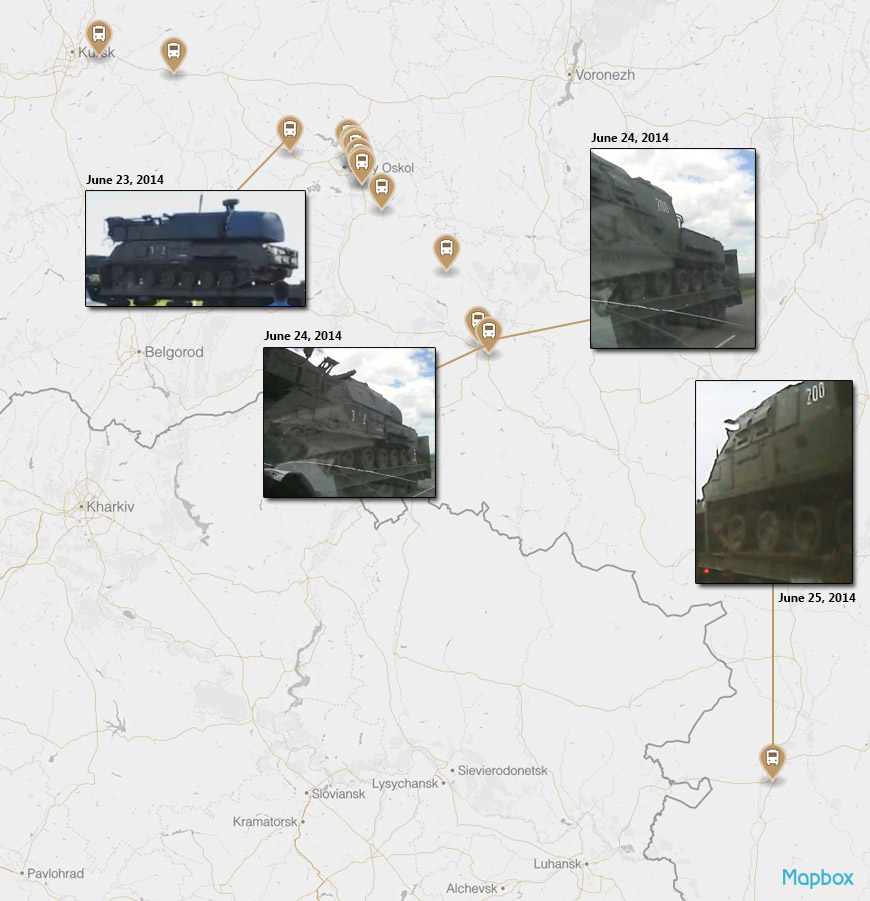 In the follow-on post, we will examine a Buk convoy’s movements in Russia in July.