Bellingcat Podcast: MH17, Episode 5 Guide: The Men on the Ground

You can listen to the fifth episode of the Bellingcat Podcast on the downing of Malaysian Airlines Flight 17 (MH17), “The Men on the Ground”, by subscribing on any major podcast application by searching “Bellingcat”, including at:

You can manually add the podcast RSS feed to your favorite podcast app with the URL: bellingcat.libsyn.com/rss

Hear the moment when MH17 was spotted by separatist rebels on the ground in Eastern Ukraine, who decided to shoot a missile at a plane they hadn’t bothered formally identifying.

Listen in on a chilling batch of intercepted calls made on the day of the downing. In a sea of disinformation, half-truths and outright lies, these calls offer a raw, unfiltered account of the moments before and after the shooting. Eliot uses this haunting collection of conversations between the separatist rebels to piece together an accurate picture of what really happened that fateful day when 298 people lost their lives.

Hear the reaction of family members whose loved ones died as a result of the tragic, careless and murderous actions of the men whose voices are captured on these secretly recorded calls.

Our guests in episode 5 of the podcast detailed their knowledge of the so-called separatist republics of eastern Ukraine, and detailed how a number of separatist commanders were caught on intercepted phone calls communicating with one another on the day of the airliner shootdown.

Pieter van Huis: Identifying the Separatists Linked to the Downing of MH17 (Bellingcat, with Pieter as the main author, 19 June 2019)

The Men on the Ground

The key separatists behind the downing of MH17 are detailed at length in our recent report, “Identifying the Separatists Linked to the Downing of MH17”. You can watch a brief summary of our research below, via Newsy:

You can read a summary of the report here, and the full PDF report here. An outline of the hierarchy of these separatist commanders can be seen below: 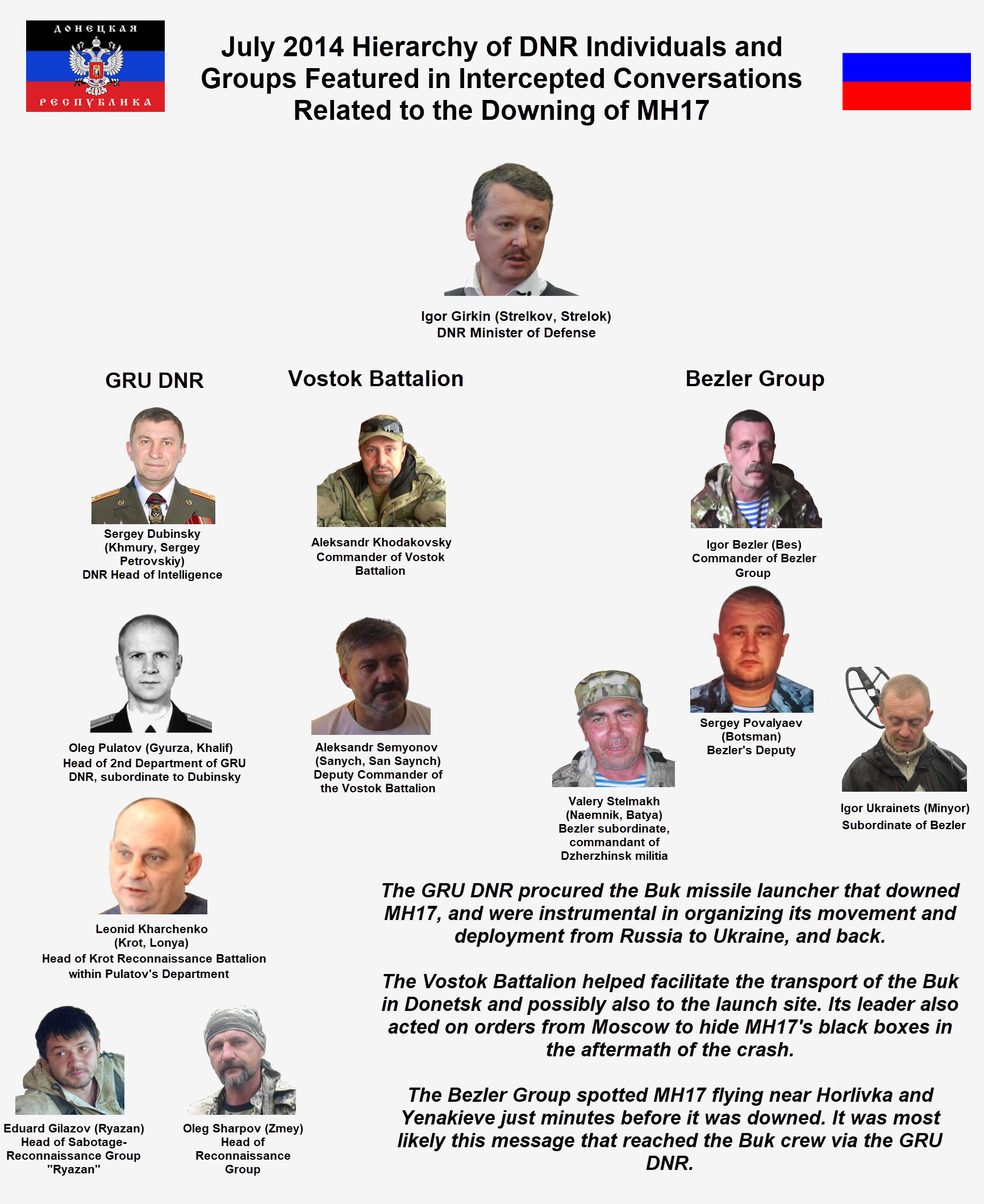 You can listen to all of the intercepted phone calls that have been published by the Dutch-led Joint Investigation Team (JIT) and the Ukrainian Security Service (SBU) below.

2015 JIT Call for Witnesses, with a number of intercepted calls, starting at 2:33:

SBU-published calls from July 14, and morning/early afternoon of July 17 (day of downing):

The series concludes by looking to the future. Five years on from the downing of MH17, the net around the suspected killers is beginning to tighten. Eliot explores the numerous legal cases being brought against the Russian Federation by those who are determinedly fighting for justice.

Hear from Fred Westerbeke who heads up the Dutch-led Joint Investigative Team, who recently published the names of four individuals whom they believe to be involved in the shooting.

Lawyer Jerry Skinner explains a landmark case he is overseeing in which many of the bereaved families have joined forces to collectively sue both the Russian government and President Vladimir Putin directly. Days after taking the case on, Jerry had his office broken into, his files relating to MH17 stolen, a single photo of Putin placed on his desk.

Eliot also speaks to Marney Cheek, a lawyer acting on behalf of Ukraine’s government, she explains that she is fighting a legal battle through the International Court of Justice. Also known as The World Court, this is the institution of choice when state actors square off against each other.

Throughout this episode, experience the resilience and strength of the family members who are defying the odds by taking on Russia in a David and Goliath legal battle that looks set to rage for many years to come.