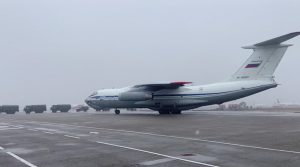 A still image from video released by Russia’s Defence Ministry shows a Russian military transport aircraft upon the arrival during a peacekeeping mission, held by the Collective Security Treaty Organisation amid mass protests in Almaty and other Kazakh cities, at an airfield in Kazakhstan, January 7, 2022. Russian Defence Ministry/Handout via REUTERS