Russian opposition politician, Alexei Navalny, is currently in hospital in Germany with medics stating tests appear to indicate poisoning with a “cholinesterase inhibitor.” Frequently termed as “nerve agents,” this category of chemicals includes, among other things, some military chemical warfare agents, some drugs, and numerous pesticides.

This article will broadly detail the nature of cholinesterase inhibitors and look at how they work.

It will also focus in on organophosphates — one of the main family of chemicals that make up cholinesterase inhibitors — given Navalny’s doctors have sought information about the case of Emilian Gebrev who was poisoned with an unidentified organophosphorus substance in Bulgaria in 2015. Details on other types of cholinesterase inhibitors will be provided below as well.

First, however, a quick lesson on the human nervous system and how it interacts with cholinesterase inhibitors for full context.

The human body’s nervous system uses a complex mix of chemical and electrical signals to send and receive messages. Signals are transmitted up and down the nervous system through a chain of nerve cells (also called neurons). But there are gaps known as synapses between the nerve cells. In order to send signals across this small synaptic gap, the body uses chemicals known as neurotransmitters. One of the more important neurotransmitters is the chemical acetylcholine.

This broad category of chemicals is called cholinesterase inhibitors. By connecting with the neurotransmitter molecules, these chemical compounds (which will be described in more detail below) either temporarily or permanently inhibit the ability of the acetylcholinesterase and/or butyrylcholinesterase to do their job, causing an overload of acetylcholine.

If something interferes with acetylcholinesterase and/or butyrylcholinesterase, the resulting condition is called a “cholinergic crisis” and the nervous system goes into overdrive. This is what happened to Sergei and Yulia Skripal and is what apparently is making Alexei Navalny sick. The degree and extent to which someone gets sick in such a scenario depends greatly on the following factors:

It is widely assumed that Mr. Navalny must have ingested the poison. Many point to a cup of tea that he drank. However, we should not assume that this is necessarily correct. He could also have absorbed the poison through his skin from a contaminated object.

More thorough discussions of the medical effects of nerve agent/cholinesterase inhibitor exposure are in these links here and here. The latter was written by the late Dr. Fred Sidell, who was one of the world’s experts in this subject.

A Broad Tent, and a Word About The Word “Toxin”

Cholinesterase inhibitors can largely be divided into two distinct chemical families that are different from each other in many other aspects. They are the organophosphates and the carbamates. The large majority of both families are man made compounds. However, there are also a handful of naturally occurring organophosphates and carbamates. The latter are “toxins”. The word “toxin” should be reserved for poisons which are of plant, animal, or microbial origin. To refer to toxic substances more generally, the words “toxicant” or “poison” are preferred. There are also some miscellaneous exotic chemical compounds that are cholinesterase inhibitors, and I will also discuss these below. But first, organophosphates.

Organophosphates, also known as phosphate esters, are a numerous family of chemicals. Broadly defined, they are composed of a central phosphorus atom with oxygen atoms attached. One is often a “terminal oxygen” – a double bond. This leaves three other “parking spots” on the phosphorus atom, for oxygen or other molecules. A variety of groups of atoms can be attached. The diagram below shows the basic structure. It should be noted that the various structures attached to the phosphorus atom can be very complex in themselves, leading to an enormous number of variations and permutations. Things like sulfur or fluorine can take the place of some of the oxygen. For example, here is the structure of the pesticide Malathion: 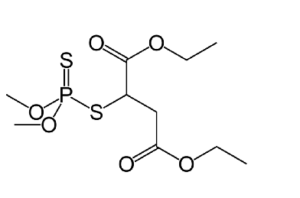 With Malathion, you can see that two different sulfur atoms (S) are attached to the phosphorus.

In the image below, we can see an example with fluorine taking up a spot. 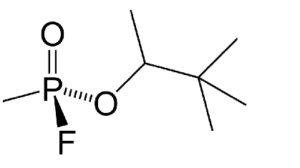 The pictured chemical, C7H16FO2P, is the chemical warfare agent Soman.

Importantly, the organophosphates tend to form permanent bonds with the cholinesterase molecules, making them more resistant to medical treatment. Oximes, a class of medication, can break the bond and restore the cholinesterase, thus helping a person sick from chemical exposure. However, although this bond between the organophosphate and the cholinesterase starts out as reversible, it becomes permanent after an ageing time. This ageing time varies widely from chemical to chemical. For some of the more exotic chemicals in this category, the ageing time is not well understood.

Organophosphates include a wide number of subcategories, which I will summarize here before moving on to other cholinesterase inhibitors.

Pesticides: The original scientific and commercial development of organophosphates was driven by a desire to identify useful pesticide formulations. There are numerous pesticides in the organophosphate family. Some examples include:

There are numerous other pesticides in this category, and they range from relatively harmless to humans to extremely hazardous to health. More very reliable information on individual pesticides can be found here.

G-Series nerve agents: These are the original military nerve agents, first isolated by Germany in the 1930s and much copied by other countries after World War II. Principal examples include:

There are also a number of lesser known G-series nerve agents that mostly existed only in laboratory studies.

V-Series nerve agents: These are the second generation of nerve agents, and have less volatility (i.e. the propensity to evaporate from liquid to vapour) than the G-series of nerve agents. They were originally pioneered by Swedish and British chemists, but then copied by the US and USSR. The major variants are VX, Vx and VR (the Russian copy of VX), although there are a number of other variants that mostly never saw any development outside of laboratories. They have a sulfur atom in one of the bonds to the phosphorus atom.

“Novichoks”: These are a series of military nerve agents developed by the “FOLIANT” project in the Soviet Union in the 1970s and 1980s. A broad range of chemicals was considered for this project, but the substances known as A-230, A-232, and A-234 are included. Exact chemical descriptions of these substances vary.

Naturally Occurring Toxins: There is at least one known organophosphate that occurs in nature as toxins. This is (5S)-5-[(Dimethylamino)methyl]-1- {[hydroxy(methoxy)phosphoryl]oxy}-4,5-dihydro-1H-imidazol-2-amine, also known as guanitoxin. It is synthesized in nature by cyanobacteria of the genus Anabaena.

Miscellaneous Organophosphates: There are numerous other organophosphates. Some have no particular identified use. Here are few examples:

Now, with organophosphates described in detail, let’s move on to other cholinesterase inhibitors.

Carbamates, a separate set of chemicals that can comprise cholinesterase inhibitors, are a totally different type of molecule than organophosphates. Broadly speaking, they follow the structure shown below. 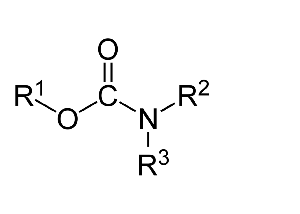 Pesticides: Many pesticides are in the carbamate family. Like the organophosphates, their relative danger level to humans varies from fairly innocuous to highly lethal. Main examples include the following:

Medications: There are a number of carbamates that have medical uses, including treatment of myasthenia gravis, Ogilvie syndrome, Alzheimer’s disease, and other conditions. This link has further information. Some examples include:

It should be noted that physostigmine was previously used to simulate nerve agent attacks in laboratory monkeys. Pyridostigmine has been fielded in the past as a nerve agent pretreatment for its ability to bind with acetylcholinesterase in an easily reversible way, thus allowing the human body to have a reserve of acetylcholinesterase. This use has been controversial. See here for more information on nerve agent pretreatment.

Toxins: There is at least one example of a naturally occurring toxin in this family. It is physostigmine, which comes from the Calabar bean in West Africa. This is the same substance used medicinally above. There are also some shellfish and algae toxins in the carbamate family, but they generally appear to have adverse mechanisms of action other than cholinesterase inhibition.

As mentioned above, there are a variety of odds and ends of chemicals that interfere with acetylcholinesterase that are not in the carbamate or organophosphate families. Many are alkaloids. Some examples include:

Galantamine (a medicine used for dementia, also naturally occurring as a toxin in some snowdrop plant species)
Green mamba venom
Tacrine (discontinued drug)
Conodurine (a toxin from the Tabernaemontana genus of flowering plants)
Onchidol (a toxin from a type of sea slug)

There are a handful of chemicals which are principally or only butyrylcholinesterase inhibitors. The drug candidates cymeserine and profenamine are examples in this relatively exotic category.

The list of chemical compounds here is by no means complete. There are many thousands of compounds in both the organophosphate and carbamate families. Many exist as largely theoretical possibilities on charts and tables, with no known commercial, medical, or scientific uses. It is eminently possible that a chemical hitherto ignored in the technical literature may have been secretly developed as a cholinesterase inhibiting poison.

Furthermore, as carbamates and organophosphates will degrade rapidly in the human metabolism and their metabolites can be excreted away, it can be difficult or even impossible to tell exactly which substance or cocktail of substances is responsible for a given poison. The necessary biological detective work is hindered by elapsed time. It is quite possible that we may never know exactly which chemical has poisoned Mr. Navalny.

[UPDATE: Several days after this article was written, Charite hospital in Berlin announced that a German government laboratory had identified a Novichok-series compound as the poison afflicting Mr Navalny.] 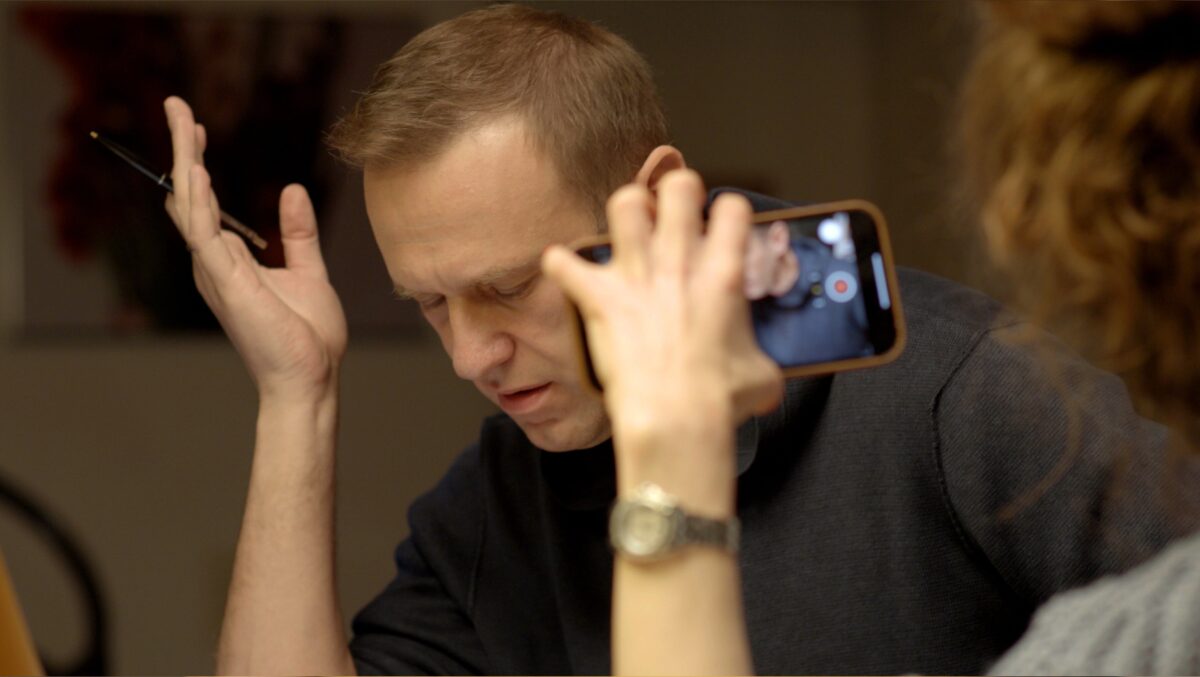 “If it Hadn’t Been for the Prompt Work of the Medics”: FSB Officer Inadvertently Confesses Murder Plot to Navalny