At a Monday press conference in Kyiv, Ukraine, the Ukrainian Security Agency (SBU) announced that it had intercepted passenger manifests from Russian MoD-chartered airliners transporting mercenaries working for Wagner, a Russian private military company (PMC). The manifests, involving flights from Russia to several African and Middle-East destinations in the latter half of 2018, allegedly transported a total of 1012 mercenaries to Sudan, CAR and other African destinations.

The most explosive allegation made at the press conference by the SBU was that PMC Wagner’s mercenaries were issued Russian international travel passports in sequential batches by — and this is crucial — a single Moscow-based passport desk that had issued fake identity papers to undercover GRU officers Mishkin/Petrov and Chepiga/Boshirov.

Bellingcat first reported in September 2018 that this passport desk, known as Central Migration Office Unit 770-001 (“Unit 770001”), is routinely used to issue domestic passports to GRU undercover officers, such as the Salisbury poisoning suspects and two unrelated GRU undercover officers indicted by Montenegro over the alleged 2016 coup attempt in that country. Bellingcat and other organizations later established that this passport desk also issued Russian passports to a handful of foreign VIPs freshly bestowed with Russian citizenship, people such as French actor Gerard Depardieu.

Bellingcat has subsequently discovered that this same office had also issued passports to Russian civilians with links to the Russian Ministry of Defense — either through direct employment or via a close family member. 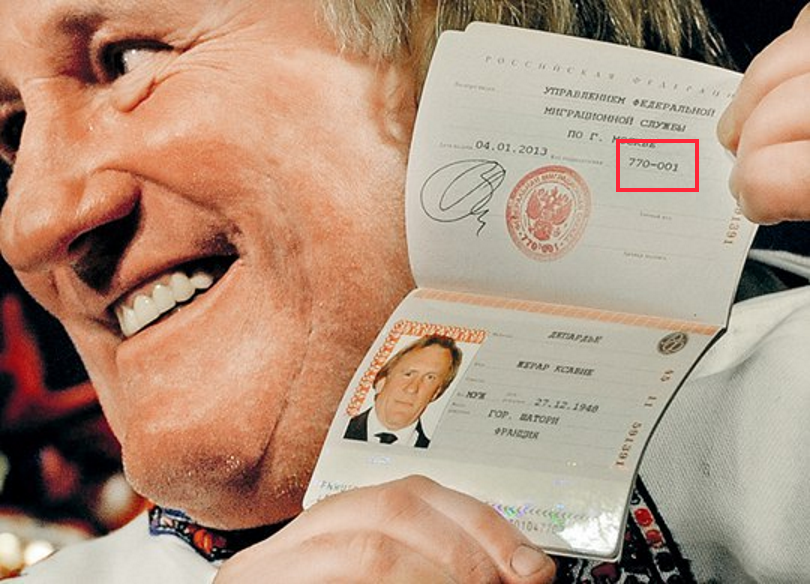 The SBU’s allegations are significant in that, if proven true, they would implicate the Russian government in not simply tolerating Wagner’s overseas military operations (which are actually illegal under Russian law), but in being actively involved in the facilitation of such black ops.

Furthermore, the fact that (apart from a handful of foreign VIPs), Unit 770001 has only been known to issue passports to people linked to the Ministry of Defense, the mass issuance of passports to PMC mercenaries by this same office would provide the strongest documentary linkage so far between Russia’s MoD and the illegal private army.

Given the high stakes raised by the SBU’s allegations, Bellingcat set out to independently verify these explosive claims.

Following the press conference, the SBU published three sets of lists of alleged PMC Wagner mercenaries. The first two lists included names, dates, and places of birth, as well as domestic and international passport numbers of sixteen alleged Wagner mercenaries, seven of whom were said to hold international passports issued in one “series” in 2015, and another nine with such issued in 2017. Notably, the lists included names with birth places from all over Russia, while the passport issuing authority — in all cases, SBU claimed — was the Moscow-based Unit 770001.

The third list, which was the longest, included only the names and birth dates of 149 alleged PMC Wagner mercenaries, who, the SBU claimed, had been deployed in Sudan in late 2018 and early 2019. SBU specified that the first two lists were subsets of the larger list of 149 people. 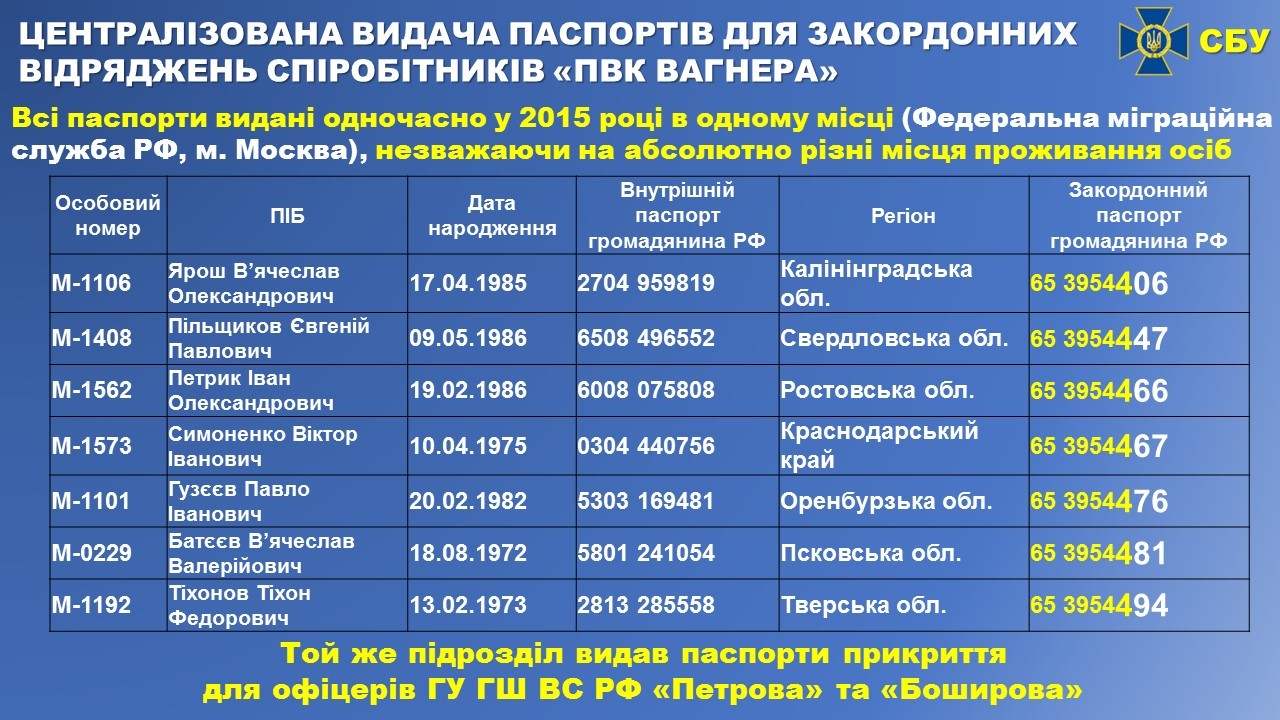 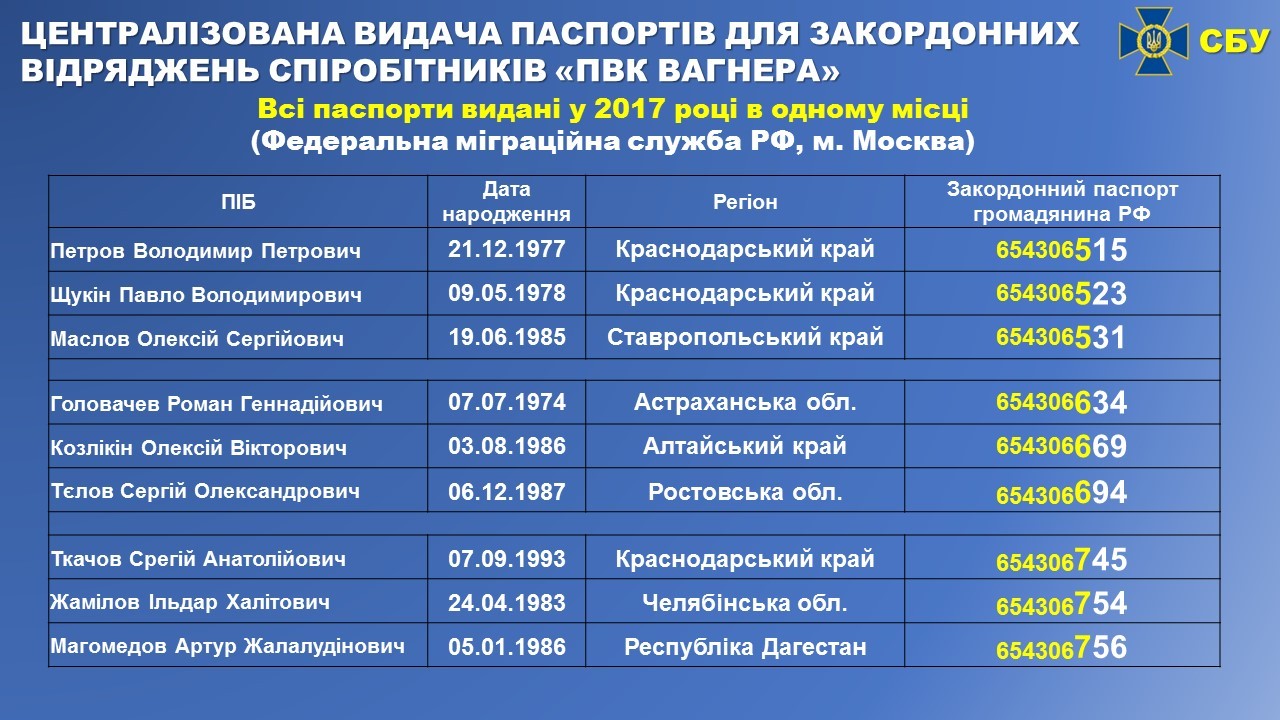 As Bellingcat does not have access to the database of international passports issued by passport unit 770001, it was impossible to immediately validate the SBU’s claim that these alleged mercenaries had received passports from this agency. The passport numbers were consistent with those identified by us in a number of confirmed GRU undercover officers’ passports, and the sequence of numbers for the two years fit into the timeline of other passports issued before and after 2015 as previously reviewed by Bellingcat.

The SBU’s allegations could be substantially confirmed via indirect means. We started by taking a random sample of names from the first and second SBU list, which included both international and domestic passport numbers of alleged PMC mercenaries.

As part of our investigation into the Salisbury poisoning suspects, we had acquired a copy of a leaked database of domestic air travel bookings in Russia dating from 2014 to 2016. This database, which can be acquired from a number of torrent sites and database vendors in Russia, has proven to be accurate but not comprehensive, as it does not necessarily include all air-travel in this period.

We attempted to locate several randomly selected domestic passport numbers from the SBU’s list in the air-travel database. We also tried to find names from the long list of 149 names that did not contain passport data; in this case we searched for full name and birthdate matches.

Out of eleven attempts, we were successful in finding seven of the names from the SBU’s list in the domestic air-travel data.  Of these, three were matched by (domestic) passport numbers, and four by full name and birth date.

A startling observation from the resulting dataset was one destination that overlapped in all of the domestic air-travel records for the seven individuals involved. All seven had a very limited air-travel history, but each had taken at least one flight with the destination being Pashkovsy airport.

Pashkovsky is the main airport serving Russia’s southern city of Krasnodar. Notably, PMC Wagner’s main training camp is based at the village of Molkino, as reported by Russian investigative media. Molkino is approximately a 30-minute drive from Pashkovsky. 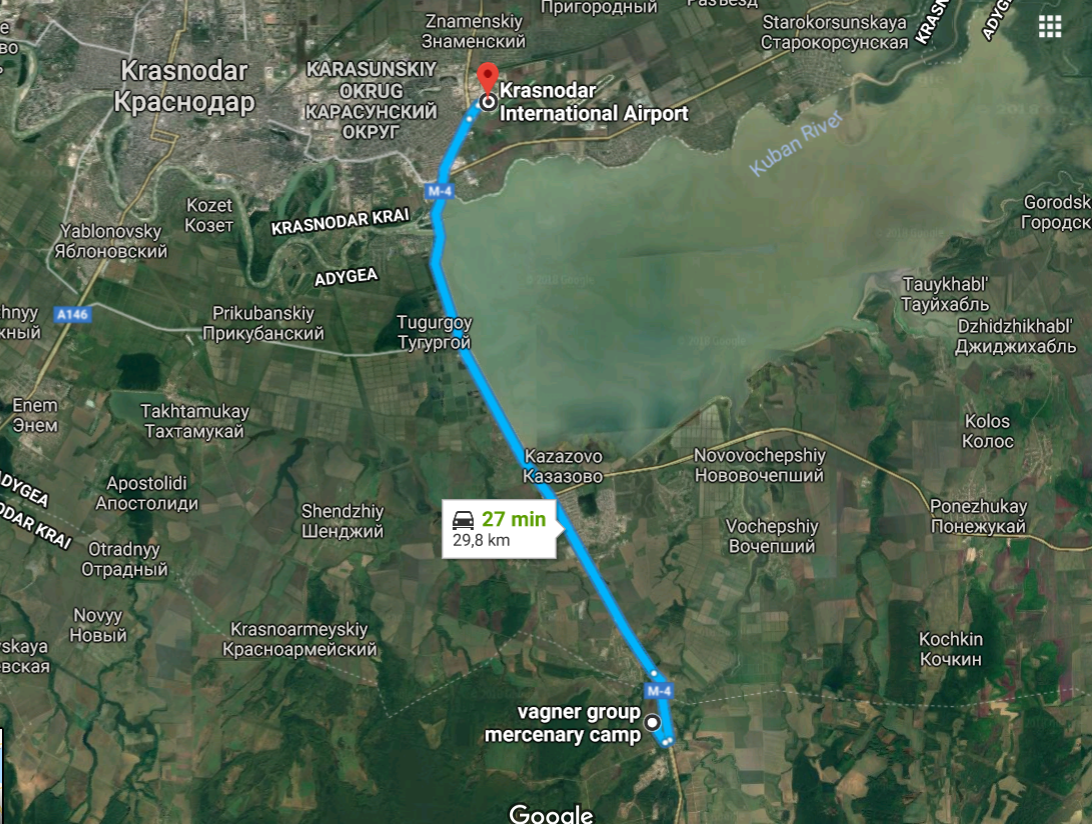 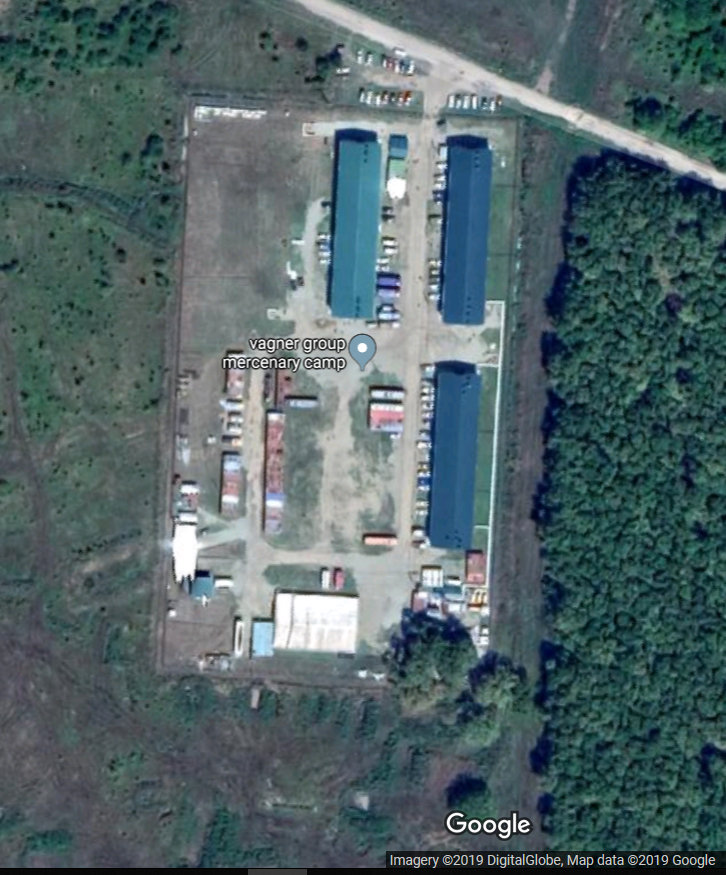 Notably, we were able to identify flights on which several of the persons identified by the SBU had traveled to or from Pashkovsky airport in a group.

However, this allegation was indirectly confirmed when we checked if any travelers having international passports from the same number series as those on the SBU lists had made domestic trips using such documents. Indeed, we identified two such travelers. Notably, they had both travelled (only) between St. Petersburg and Pashkovsky on such passports. St. Petersburg is the home base of U.S.-sanctioned Yevgeny Prigozhin, commonly known in media parlance as “Putin’s Chef.” Prigozhin is a catering provider to Russia’s Ministry of Defense and other government bodies and is widely believed to be the financial sponsor of PMC Wagner.

Our finding indirectly validates the SBU’s allegation that the names identified at the press conference belong to PMC Wagner staff, and that at least some people among PMC Wagner operatives have passports from the same office that issued GRU undercover identity papers.

Previous links between PMC Wagner and GRU were evidenced by an intercepted phone call between a high-ranking GRU officer and the chief executive and nom-de-guerre-namesake of the PMC, Dmitry Utkin, a.k.a. “Wagner”. The GRU officer on the call had previously been identified conclusively by Bellingcat as Col. Oleg Ivannikov, a staff GRU officer who was deployed in 2014 to Eastern Ukraine and was involved with procuring the Russian Buk missile launcher that downed MH17. The call’s content strongly suggests that Wagner’s CEO Utkin takes direct orders and reports to Col. Ivannikov.

Using the same 2014-2016 database, we checked domestic travel records for both Col. Ivannikov and Dmitry Utkin. Both of them made trips almost exclusively to/from Pashkovsky airport.

Col. Ivannikov travelled from Moscow to Pashkovskiy at least three times in 2014. No other domestic air travel records exist for him in this period among the public leaked records we reviewed.

Wagner CEO Dmitriy Uktin took at least 7 flights between St. Petersburg and Pashkovskiy airport in 2014 and 2015. The only other destination he flew to was Rostov, one of the largest Russian cities near the Ukraine border.

The limited analysis and verification conducted by Bellingcat on the data presented by SBU with publicly available leaked records is sufficient to conclude that the persons listed are indeed mercenaries contracted by, or otherwise associated with, PMC Wagner. Our limited-scope audit of names and passport numbers confirm that the referenced persons do exist, and that many of them had travel patterns that can be plausibly explained with traveling from their home regions, via either Moscow or St. Petersburg, to the main training camp of Wagner near Krasnodar.

While we cannot unequivocally endorse SBU’s assertion that the issuance of the sequential international passports to these mercenaries proves their linkage to GRU, it is certain that no such mass issuance of passports from the central passport issuance agency at the federal level (which is not routinely used for issuance of civilian passports) could take place without the active endorsement of the state apparatus, if not necessarily the GRU. However, the rest of the available evidence, including the audio intercepts and the multiple travel of a senior GRU officer known to be in a commanding position to Wagner’s commander and the location of the PMC’s training camp, strongly supports the hypothesis that PMC Wagner is indeed a proxy and serves at the command of the Ministry of Defense, and in particular the GRU. 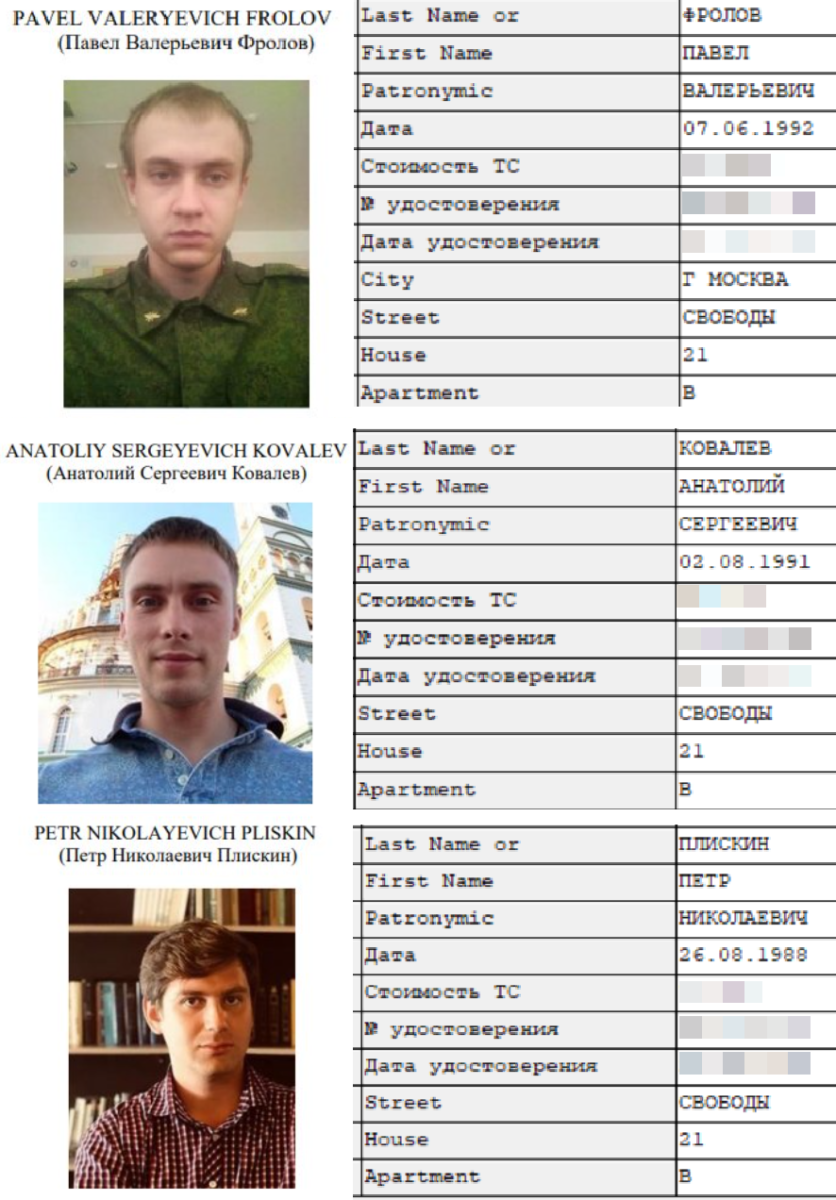