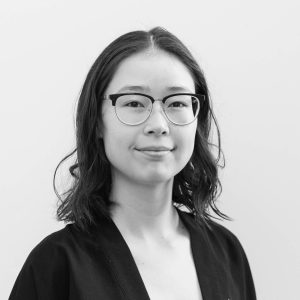 Aiganysh is a Kyrgyzstan-based researcher/data-trainer. She is particularly interested how the open data of state structures can be used to detect corruption.

This investigation was conducted jointly with Umut 2020, a new Kyrgyz popular movement focused on investigating corruption. You can watch their video of the report at the bottom of this post (Russian).

On November 10th, the businessman Aierken Saimaiti, who had an arrest warrant international arrest warrant issued after fraud allegations, was shot dead in Istanbul. In his pockets, the Chinese citizen and ethnic Uyghur had the keys to a Range Rover that was parked nearby. This Range Rover had diplomatic plates and was owned by the Kyrgyz Consulate General in Istanbul. Earlier this year, Saimaiti was involved in an Azattyk investigation regarding him being an alleged partner of Raim Matraimov, arguably the most influential figure in the region.

Who is Aierken Saimaiti?

In June 2017, an arrest warrant was reportedly issued for Aierken Saimaiti by the Kyrgyz Ministry of Internal Affairs on charges of fraud to the value of $3 million; the notice also described how Saimaiti might have a fake Kyrgyzstan passport. 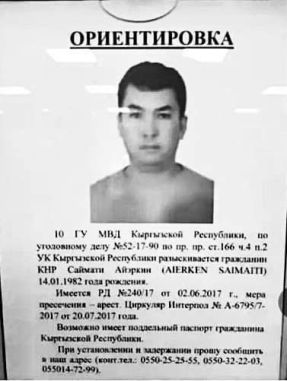 On November 14, Tynchtykbek Chorotegin, in his blog on the Azattyk website, explains that Aerken Saimaiti is actually the same name as Erkin Samat, rather than a false identity. The confusion came from transliteration mix-ups, as the signature on the victim’s driver’s license says Erkin  (ٸہ ركىن) in the Uyghur language, in Arabic script. In May 2019, the the Kyrgyz news outlet Radio Azattyk (Radio Liberty) published an investigation into a possible funneling of $700 million (USD) out of Kyrgyzstan by arguably the wealthiest and most influential figure in the country, Raimbek Matraimov, a former senior customs official. According to the investigation, Saimaiti helped Matraimov withdraw more than a third of this money – about $250 million.

On November 10th, Aierkan Saimaiti was shot while at a cafe in a central, heavily-trafficked area of Istanbul’s Fatih district. The suspects were caught two days later caught while trying to flee Turkey for Syria.

Turkish media outlets have reported that Saimaiti was a customs clearance businessman and may have been killed for reasons related to his “financial difficulties” and debts. The suspects reportedly said that they carried out the attack because the target had problems with a creditor in Kyrgyzstan.

While a murder in central Istanbul over Kyrgyz debts is interesting in its own right, the fact that the Chinese national Saimaiti had the keys to a car belonging to the Kyrgyz consulate in Istanbul at the time of his murder adds intrigue to the event. The Kyrgyz Ministry of Foreign Affairs has confirmed that the keys in the the murderer businessman’s pocket were indeed for a Range Rover belonging to the Kyrgyz Consulate General in Istanbul. A representative of the ministry said in an interview with Radio Azattyk that Sopokov — who has since been fired following the assassination of Saimaiti — gave the Range Rover to the Ramadan Tourism dealership in order to sell the car, but “having violated procedures”, left a diplomatic number plate on it. The ministry could not explain why Sopokov’s Range Rover ended up at the site of the Saimaiti murder. 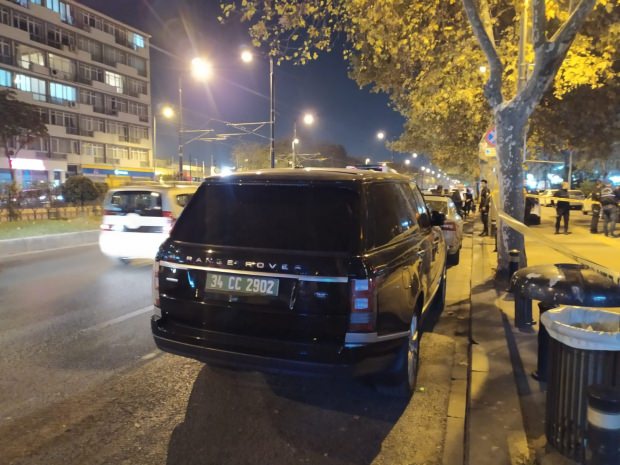 Geolocation of the Murder Site

While Turkish media has reported that the assassination occurred in a hotel cafe on Millet street in Istanbul’s Fatih district, neither the cafe nor the hotel name have been publicized.

In browsing news outlets we find a video (embedded below) where at one point you can see an image of the cafe where the assassination occurred. A sign reading “Ziraat Bankasi” is distinguishable on the top left corner. Google Maps returns two Ziraat Banks on Millet street. Looking at Google Street View and cross referencing with the video, we confirm the video was filmed from the coordinates 41.016852, 28.930688. A 2018 image shows the cafe as Diplomat Uyghur Restaurant —  a notable detail when considering that the assassinated businessman was an ethnic Uyghur. When looking at the buildings opposite of the cafe, we find a clear match. Looking up Diplomat Uyghur Cafe, we find that it has been “permanently closed”, per Google. The incident occurred at a hotel cafe, allowing us to search for a hotel near the coordinates and find one just right of the bank. 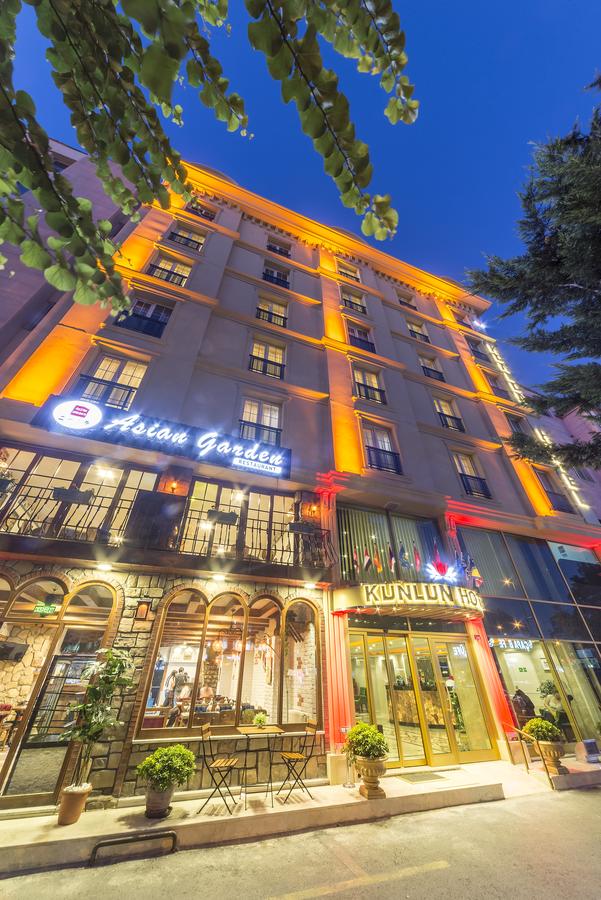 In particular, the windows and doors are the same shape, as well as the shape of the Kunlun Hotel sign, along with the red backlight near the doors. The cafe is Asian Garden, which also matches the entrance arch sign.

The fact that the fugitive Saimaiti was using the car of the former (following his firing this week) Kyrgyz Consulate General Erkin Sopokov in Istanbul may indicate that the two were friends, thus a search across Sopokov’s Facebook friends may yield some clues as to their relationship. Among the friends of Sopokov we find a profile for a man named Semet Erkin — which sounds a lot like a Kyrgyz transcription of Aierken Saimaiti’s name, Samat Erkin. One of Erkin’s photos shows a brochure for the same Ramadan Travel in Istanbul that the Kyrgyz Consulate General claimed that the car would be sold at. 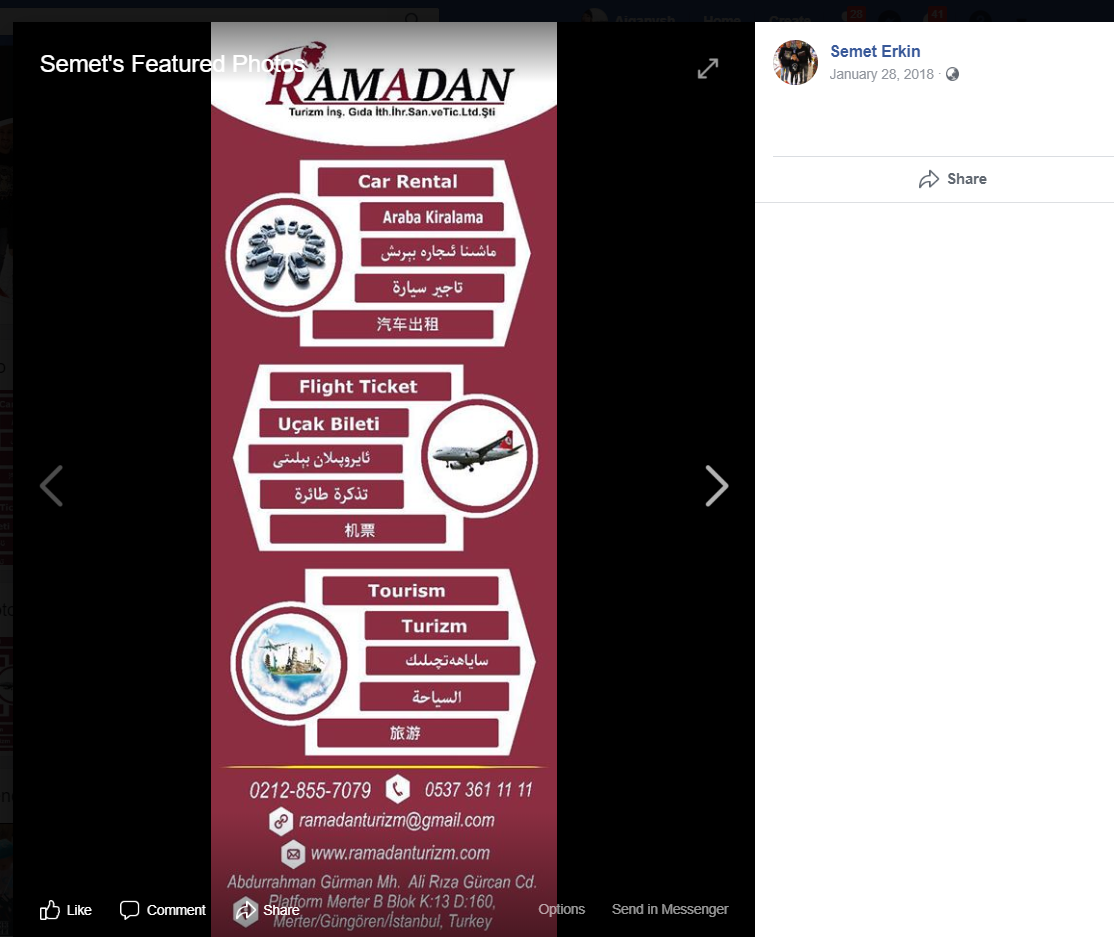 And if we look in the comment section of one of Erkin’s profile pictures, we find something that makes our investigation much easier — a 2017 photograph showing a business card. 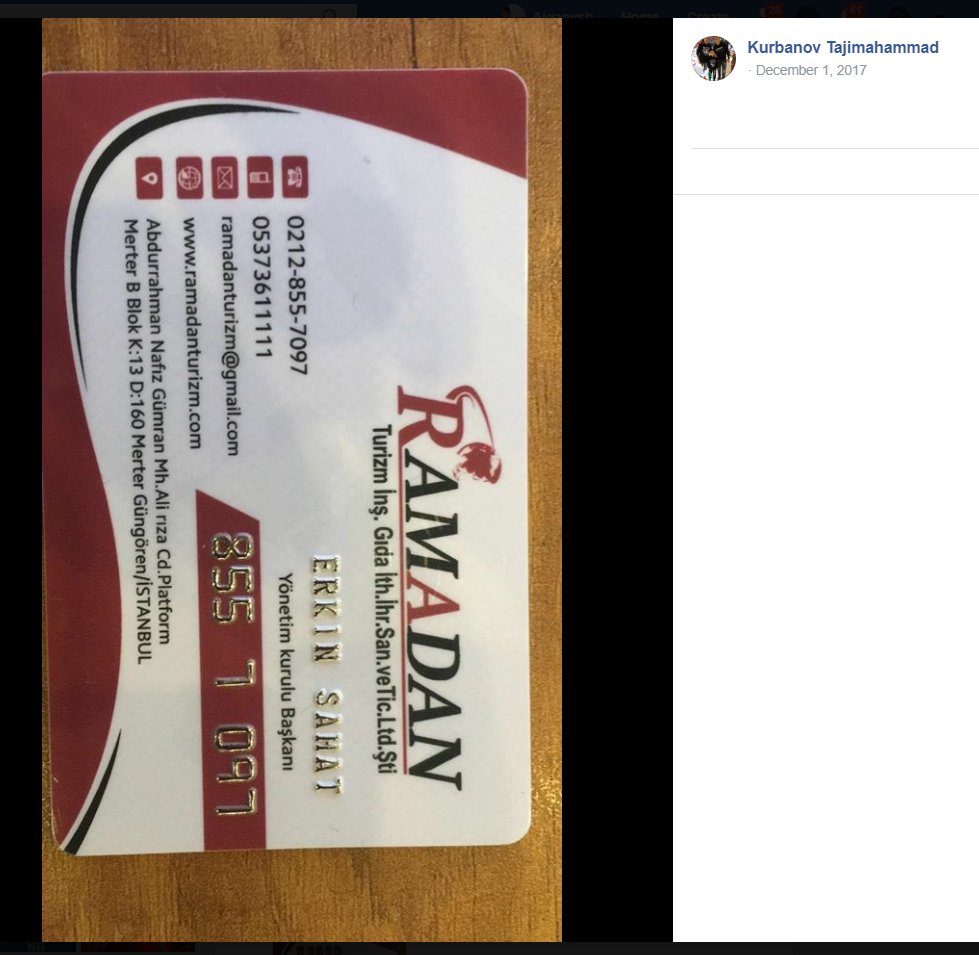 Erkin Samat, or Aierken Saimaiti, is the Chairman of the Ramadan Tourism. As it turns out, the Kyrgyz Consulate General technically did not lie when he said that he was giving his car to this agency, as the murdered Saimaiti runs this business.

To further confirm that this account of Erkin Samat is the same as Aierken Saimaiti, we see his birthday, which is an exact match for that of Saimaiti. Using Erkin’s Facebook username (semet.erkin), we can look up similar usernames on Instagram to find more of his digital footprint. An Instagram account under the same name (semeterkin) exists, and even has a photograph of Semet Erkin (or Samat Erkin, or Aierkin Saimaiti, depending on which transliteration is used).

The man on the second from the left is indeed Sopokov, the Kyrgyz Consulate General in Istanbul. A reverse image search with the other men identifies them as Ibad Huseynov (first from the left), a well-known Azerbaijani veteran and National Hero of Azerbaijan [update: Huseynov claims to be a National Hero of Azerbaijan, but this is a controversial matter that has not been proven], and Yalçın Topçu, a Turkish politician who has served as the Minister of Culture and Tourism. The photo dated is February 18, 2019 — by that time, Saimaiti had been wanted for almost two years, yet he was publicly sharing photographs of himself with high-ranking Kyrgyz and Turkish officials.

Additional footage from Saimaiti’s Instagram a year before his meeting in Ankara show a car, apparently in Bishkek, while it is snowing. Searching the license plate (01KG821AAJ) in the State Registration’s Service’s car check database brings back no results, meaning that it was not registered. It is unclear why this result was returned, but could indicate some illegal activity around this car and its registration.

Additionally, checking historic weather data in Bishkek on the date of the Instagram upload shows that it was indeed snowing on this day (March 2/3, 2018).

The assassination of the fugitive businessman Saimaiti raises new questions about his murky relationships with high-ranking Kyrgyz and Turkish officials. Digging into the social media accounts of the assassinated businessman and his colleagues shows how he continued to function in both Turkey and Kyrgyzstan while subject to an arrest warrant — and apparently a continued acquaintance of some kind with the Kyrgyz Consulate General in Istanbul up to the time of his death.

Additionally, among the Facebook friends of Saimaiti included a number of Kyrgyz MPs and their family members, revealing what appears to be additional rot within the Kyrgyz political body. 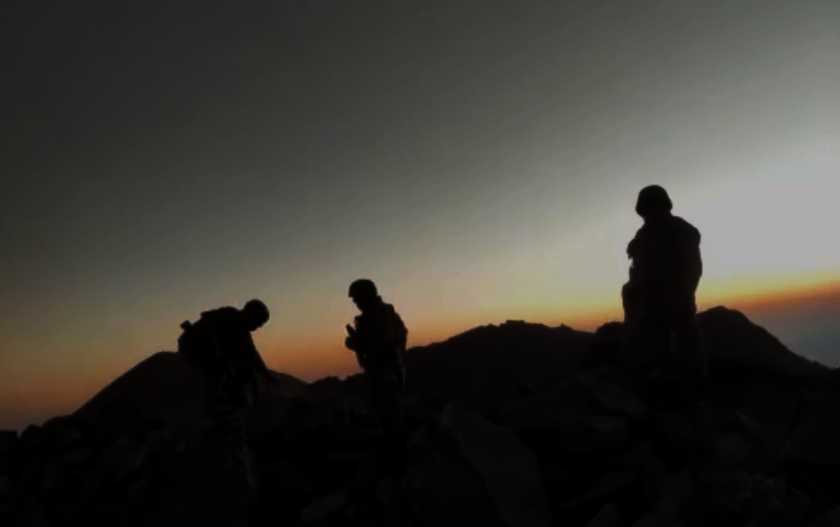