Over the past months, right-wing groups and individuals in Armenia have been actively campaigning on and offline against the ratification of the Council of Europe’s Convention on Preventing and Combating Violence Against Women and Domestic Violence (more widely known as the Istanbul Convention).

What the controversy in Armenia?

Armenia signed the Convention in 2018, but has yet to ratify it. The current authorities have announced their intent to do so in the upcoming months. Those fighting against the ratification of the Convention argue that instead of aiming at sexual and domestic violence prevention and victim protection, the document seeks to “open up opportunities for the propaganda and legitimization of perversion and perverts” and “destroy Armenian national family values, religion and traditions […] by legitimizing a ‘third sex’” in the country.

The Convention has been criticized by the Armenian Apostolic Church, which issued a statement in late July to urge the government to refrain from ratifying the document as “there are extremely concerning points in the Convention from the perspective of our national-spiritual identity and security.” According to the Church, there are “formulations and explanations in the Convention that define a third sex,” which is “incompatible with the moral understandings of the Church.” The statement also expressed a concern that same-sex marriage would be legalized with the ratification of document, which they describe as “in contradiction with the Church’s invariable doctrine about family, since a family can be formed only by the unification of man and woman.”

It should be highlighted that despite the claims of the Church and a number of right-wing/conservative activists within Armenia, the Convention neither introduces a “third sex” nor imposes legalization of same-sex marriages on signatory countries. Rather, the document clearly states that “‘gender’ shall mean the socially constructed roles, behaviours, activities and attributes that a given society considers appropriate for women and men.” Furthermore, nowhere in its text does the Convention define what a “family” should be.

What the document does promote is that signatory states take all necessary legislative and other measures to “prevent, investigate, punish and provide reparation for acts of violence against women.”

Voice of Violence and Armenia’s #MeToo Movement on Facebook

The heated public discussions around the ratification of the Istanbul Convention began in early July after the rise of a #metoo-like movement in Armenia, in which hundreds of women, along with some men, shared stories of sexual violence online. This Armenian #metoo movement was dubbed the Voice of Violence by Lucy Kocharyan, a Yerevan-based independent journalist who initially shared the stories of anonymous survivors on her personal Facebook page. This Voice of Violence initiative began with the publication by a local news outlet of the attempted sexual assault account of a Czech woman living and working in Armenia.

Kocharyan posted the story on her Facebook page, highlighting some of the comments left on the article which blamed the woman for several attempts of rape and sexual assault she had suffered in Armenia. Most of these comments argued that this kind of violence against women does not exist in the Armenian society. What followed was Armenian women, and later some men, sending their own accounts of sexual assault and harassment to Kocharyan, asking her to publish them anonymously to show that sexual violence is, in fact, an alarmingly prevalent issue in Armenia.

For far-right groups, however, these stories were construed as fakes created by Kocharyan and other “Soros-funded traitors” who seek to push Armenia to ratify the “sinister and apocalyptic Convention.”

In mid-August, a group calling themselves VETO organized a motor rally through eleven different Armenian cities in protest of the ratification of the Istanbul Convention. VETO is a self-declared “anti-Soros” group, which was created a few months ago by Narek Malyan, a former advisor to the former Armenian police chief, to fight “the propaganda of foreign agents” in the country. The “About” section on the group’s Facebook page literally says, “Blocking of George Soros and all affiliated organizations and foundations in the Republic of Armenia,” and the group has since its formation held multiple demonstrations outside the Open Society Foundations-Armenia office in Yerevan.

The motor rally was led by a newly founded moto-club called “Dark Ravens,” which, as Malyan himself has put, was created “to promote a manly and masculine way of life.”

“Men – normal and heterosexual men – are currently the most unprotected and vulnerable group in Armenia. […] We saw how preparatory works were being carried out among the public for the ratification of the Convention. There was a campaign to show that Armenian men are looking for every chance to rape Armenian women, which has nothing to do with reality,” Malyan told a journalist right before the start of the motor-rally, hinting yet again at his allegations of the falsehood of the Voice of Violence movement.

Another group fighting against the ratification is a “civil initiative” called Kamq – Armenian for the word “will”. This group launched an offline petition over a month ago in Yerevan, claiming that the Convention would “open up opportunities for the propaganda and legitimization of perversion and perverts.” Initially, the group was collecting signatures at several locations in Yerevan; they have, however, since migrated also to other major cities and provinces, including Jermuk and Etchmiadzin. Their end goal is to submit the signed petition to the Constitutional Court, with a demand to declare the Convention “unconstitutional.”

The group’s campaign is nearing its 50th day, and in this period thousands of people, including past and current parliamentarians, members of the clergy, television actors and politicians, have signed the petition. Below is an image published by Kamq, which shows some of their “prominent” signatories:

Kamq is no newcomer in the Armenian conservative scene: over the past year, the group and their leader Vahagn Chakhalyan have been actively organizing various online and offline hate campaigns  – “protest actions,” as they’ve called them – to discredit local rights defenders and groups, presenting their activities as “immoral and destructive for national and family values.” One such “protest action” took place in May, when Kamq disrupted the presentation of a sex-ed book for young children held by the local Sexual Assault Crisis Center, and then threw eggs at the organizers while they were leaving the venue. The book, according to them, was promoting immorality among children.

One month prior, Chakhalyan and his group started a Facebook hate campaign against prominent local human rights defender Lara Aharonyan, after the latter made a speech on March 8 about the rights of women, including single mothers, lesbian, trans and bisexual women. Chakhalyan and his allies at one point went as far as to threaten Aharonyan and her family physically, having called her statement “sacrilege” and “betrayal.”

This fight “for the protection of Armenian national values” has also been joined by an anti-LGBT+ initiative called “Stop G-7 in Armenia.” They, in turn, started their own online hate campaign to discredit the Istanbul Convention and those who support its ratification. Human rights activists, ministers & civil society actors have been portrayed by the group as “defenders of perversion and immorality.”

Armenian conservatives are not the first ones to have provoked controversy around the Istanbul Convention. Identical campaigns against the ratification of the documents have been carried out in a number of countries, such as Croatia, Bulgaria, Latvia, and Slovakia. Everywhere the concerns of the opposing movements have been the same: the Convention has a hidden agenda to bring a “third sex” into these countries and ruin “traditional gender roles and family values,” and to legalize gay marriage. Last year, in July, the Constitutional Court of Bulgaria ruled even that the Istanbul Convention was incompatible with the constitution of their country. 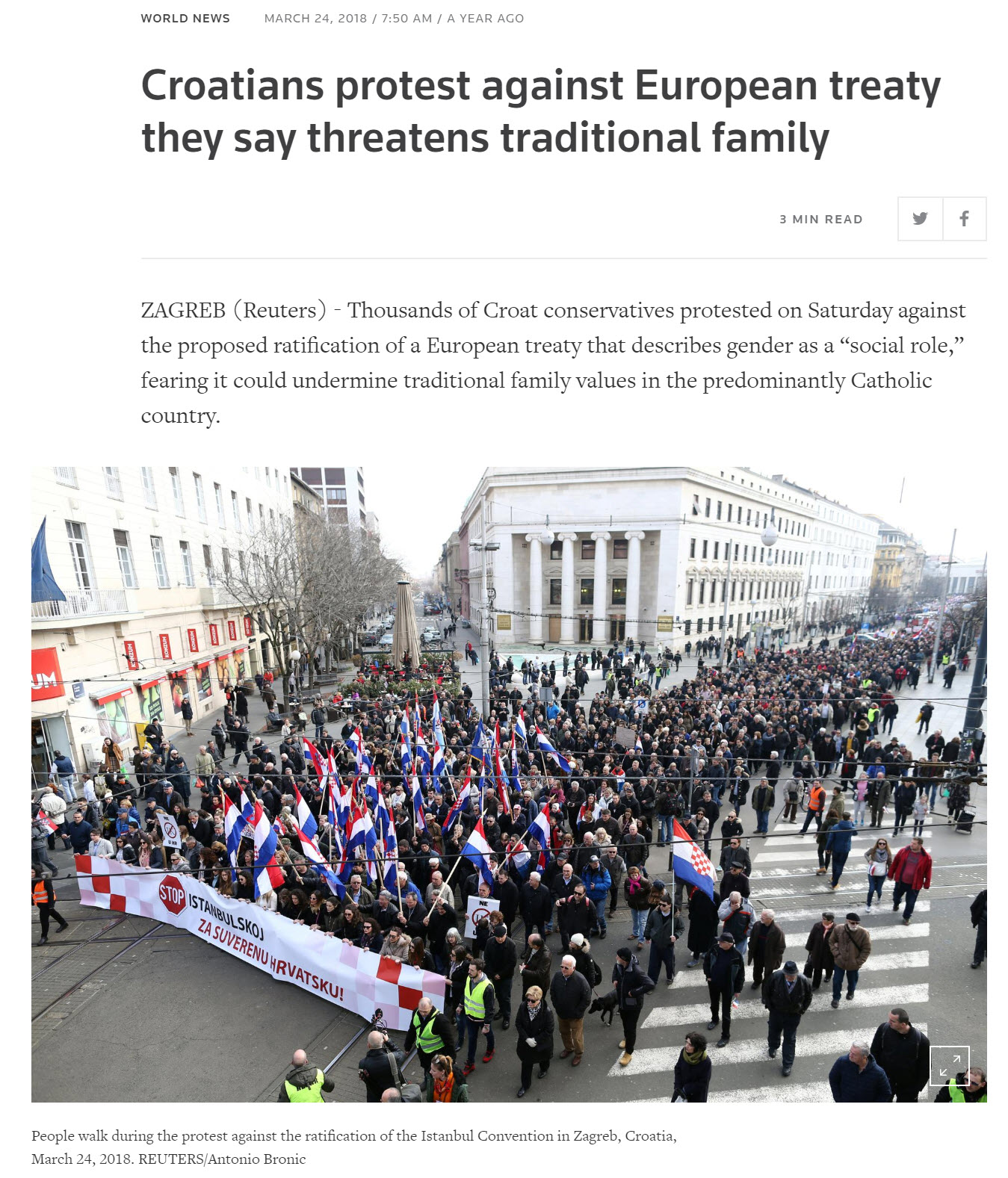 Protesters marching in Zagreb, Croatia, with a banner reading, “Stop the Istanbul (Convention) for Sovereign Croatia.” (Via Reuters)

Will the Convention Be Ratified?

It is still unclear when exactly the Armenian authorities intend to ratify the Convention, but according to Armenian Minister of Justice Rustam Badasyan, it was never supposed to happen this year. In a recent interview with reporters and a subsequent Facebook post, Badasyan said that it was “obvious” from the very beginning that the Convention would not be included in the National Assembly agenda this year. The Justice Ministry, he added, has applied to the CoE Venice Commission for an opinion on the constitutional implications of the ratification of the document and is expecting a response in early October: “After that, the Government will have to re-examine the Convention and send it to the Constitutional Court to decide whether it’s compatible with the Constitution.”

Finally, Badasyan made it a point to stress that there was no way Armenia would recognize same-sex marriage with the ratification of the Istanbul Convention.