Examining imagery of the recent incident in Azerbaijan

Azerbaijani officials downplayed the incident, saying that the ammunition collected in the depot had been meant to be disposed, and some media outlets — including the New York Times — called the location an “ammunition dump.” With satellite imagery provided by Planet Labs, Bellingcat has been able to take a closer look at the incident and its fallout.

Open source imagery and Soviet-era sources provide details regarding the bunker-type storage at the Gilyazi munitions installation, which is well-known in military circles for its massive military stockpiles. Of the three South Caucasian nations, Azerbaijan inherited the largest stocks of arsenal and munitions from the Soviet Union. Lacking estimates from the Azerbaijani Ministry of Defense (MoD) of damaged stock and overall impact, imagery helps us identify the extent of the damage.

According to the Azerbaijani MoD, the fire was localized within a day and, despite the declaration that live munitions did not pose a threat to the local population, six villages were evacuated. Images of Grad missiles scattered near residential areas have surfaced online, with YouTube footage by Meydan TV describing the impact of the incident. Reports from social media sources suggest that villages were emptied but locals without cars were left behind.

After the collapse of the Soviet Union, 11,000 carloads of munitions were transported to Azerbaijan from the Transcaucasian military district, of which 7,200 (65%) were located in the Gilyazi munitions depot (see: Baranets Viktor Nikolaevich’s “General Staff without Secrets”, Chapter 2, 1999). Despite extensive damage observed on imagery, many of the bunkers survived the massive explosions due to their hardened construction. However, the total damage went beyond what can be seen in the imagery.

For comparison, we used a pre-fire photo from Bing maps and two photographs by Səxavət Məmməd taken within the area of the munitions depot. Note: the gate posts are identified on the satellite photo by the shadows they cast. The two red circles in the photo represent the two small red circles in the imagery with the blueish large circles in the second photo at the gate of the entrance representing the small greenish circles in the top right hand side of the imagery. 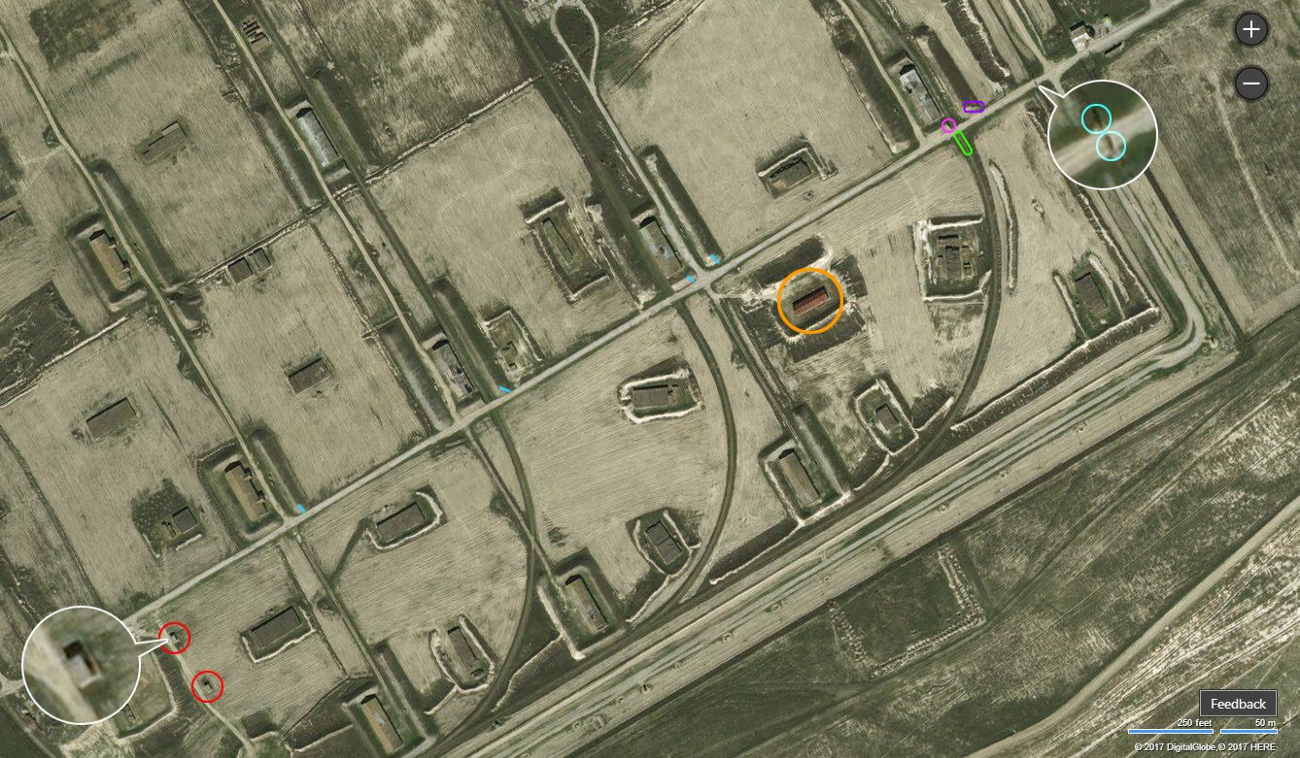 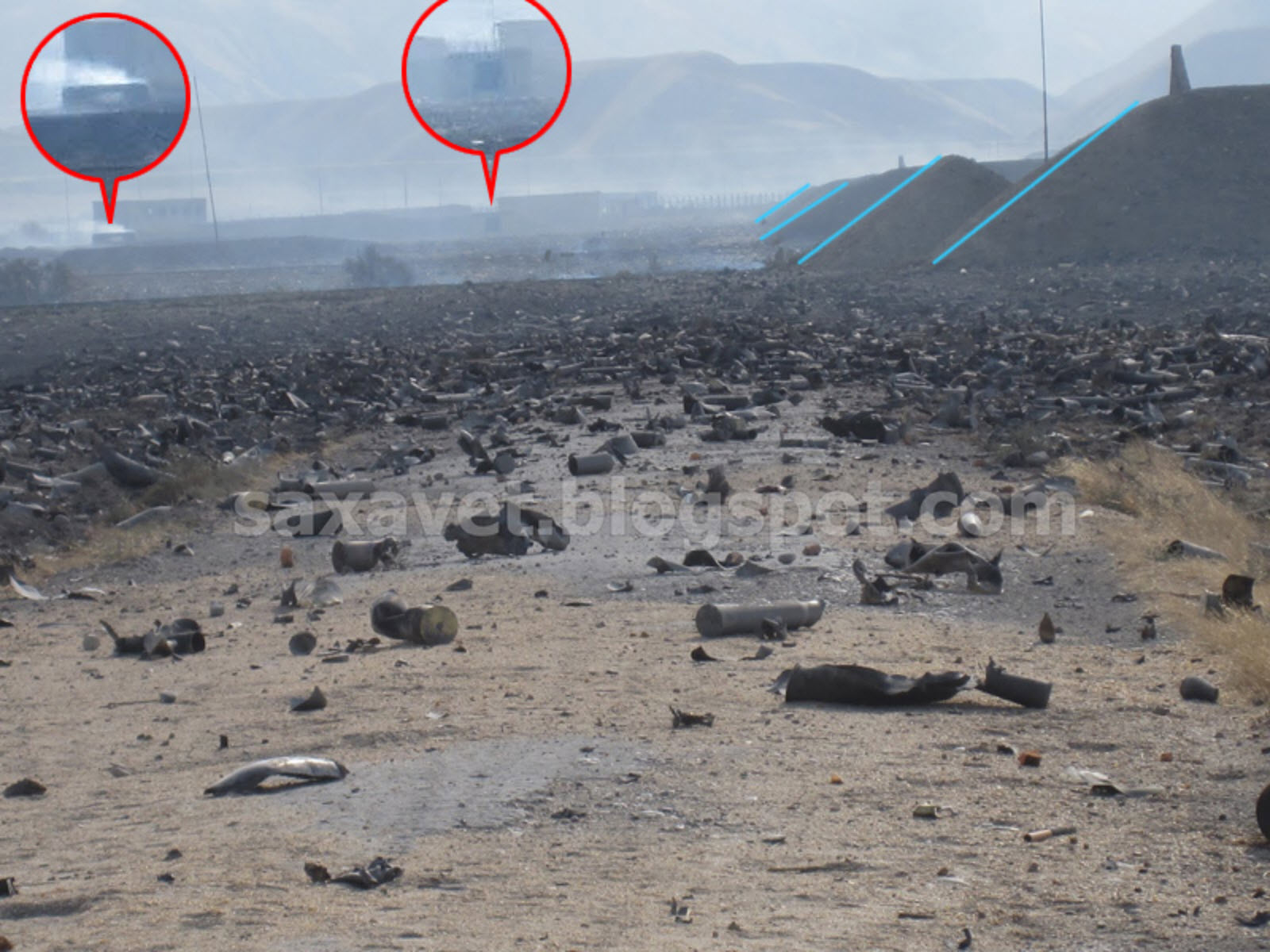 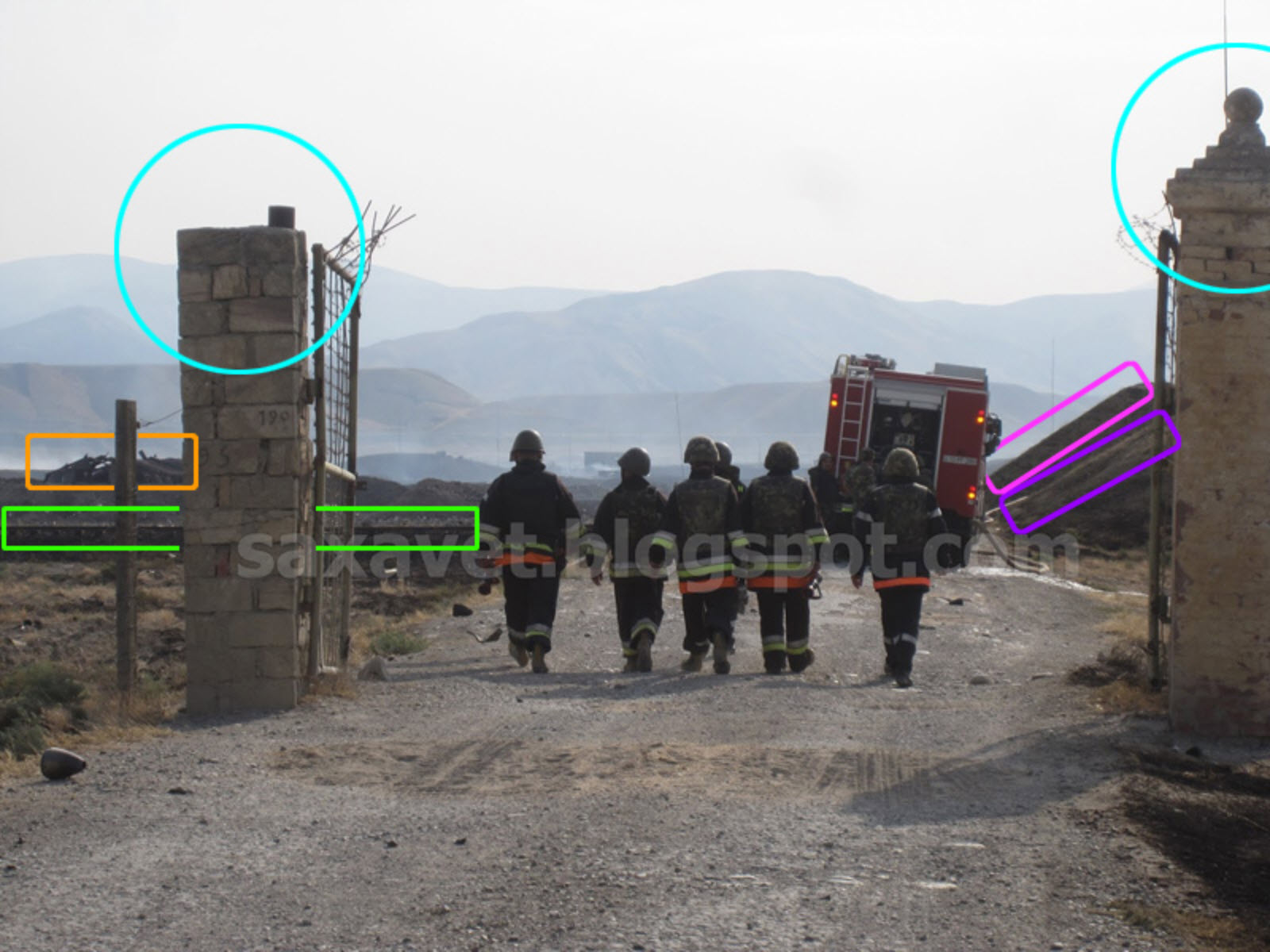 Measurements from imagery indicate that craters are between 25 and 35 meters wide. Superficial damage on the surface suggests that the underground storage units are likely undamaged. What is interesting, however, is that a closer look at historical imagery reveals many above-ground storage facilities, which now have been mostly destroyed. Also, cross-matching the craters identified on imagery and the location of storage units corroborates the damage of above-ground storage. Furthermore, pictures that have emerged online show fields of exploded artillery shells, confirming the existence of above-ground munition storage units and the extensive fallout.

We can see the impact of the explosion by viewing the munitions installation before (August 23), during (August 27), and after (August 28) the explosion in the composite below, with all images provided by Planet Labs.

Yellow circles on the August 27th photograph mark the visible seats of fire. There are other smaller “hot spots”, but it is hard to tell whether these are fires too. Most of the area is covered with heavy smoke. A closer look at the August 27th imagery shows how the fires were still burning at the time when the image was captured. 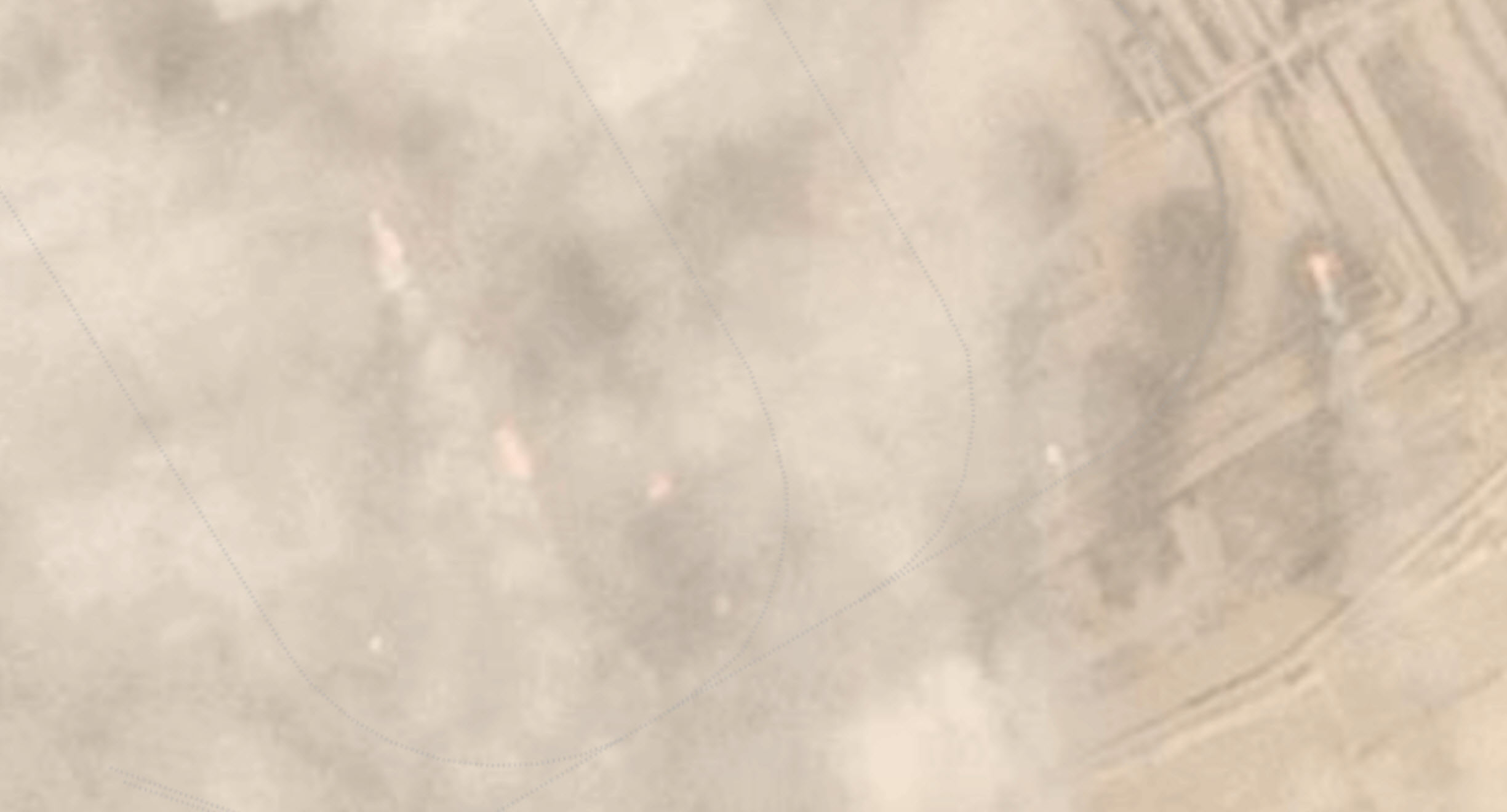 Below, we see imagery accessible on Google Earth from May 26, 2016, with craters (red circles) identified from the August 28, 2017 Planet imagery and seats of fire (full yellow circles with red outlines) identified from the August 27, 2017 Planet imagery. The three black circles show the objects that definitely had suffered from heavy fire, but have no visible craters. Also, underground installations are marked with green rectangles, and the carload system is marked with yellow lines. We used Bing’s imagery to identify these areas, as it has the highest resolution imagery available for this area. 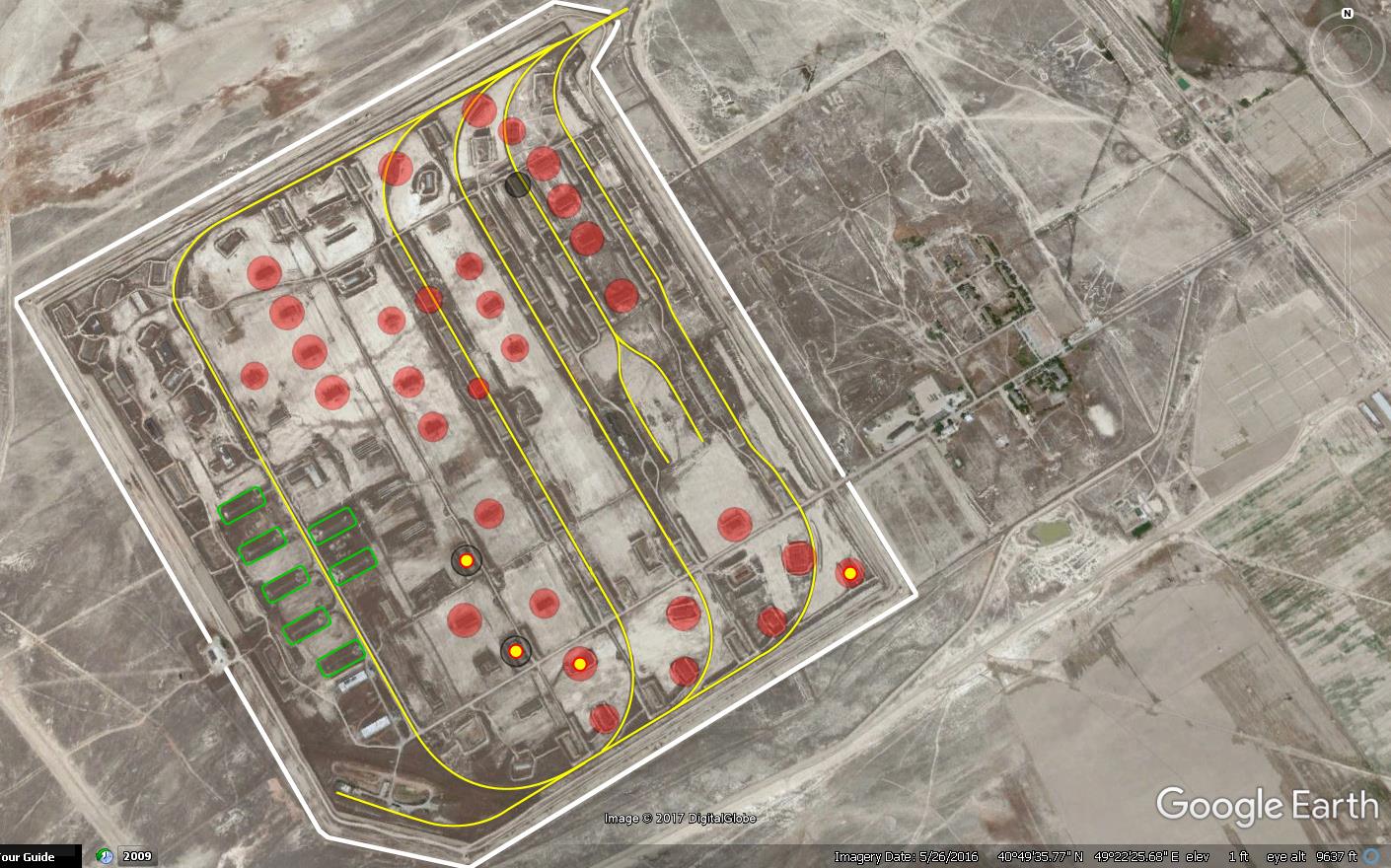 With such widespread damage, the clean-up operation and repairs to nearby villages that suffered damage will be costly. Indeed, the Azerbaijani MoD can use the incident as an opportunity to provide experience for its Explosive Ordnance Disposal Unit. Though the damage to the area was quite extensive, Azerbaijan got off relatively lightly considering the lack of mass fatalities when compared to other munitions explosions, such as the 2008 explosions at Gerdec, Albania, that resulted in 26 deaths. Finally, the full extent of the damage will be unknown until there are boots on the ground; in the meantime, the Bellingcat team will continue to monitor and update the situation with photos and imagery.

Satellite imagery from Planet Labs, Google Earth, and Bing maps, as well as images from the ground published by Azerbaijani photographer and journalist Səxavət Məmməd and the Ministry of Emergency situations of Azerbaijan were used for the analysis. The authors would like to acknowledge the collaborative efforts of Bellingcat and members of Razm.info, who provided additional photographs, image composites, and geolocations and for cross-checking imagery with Russian statistical information.