Who Attacked the Hodeidah Hospital? Examining Allegations the Saudi Coalition Bombed a Hospital in Yemen

With thanks to the Bellingcat Investigation Team.

On Thursday, 2nd August several explosions rocked the Houthi-held city of Hodeidah. The locations of these explosions were reported to be the harbour used for fishing boats and within the vicinity of the al-Thawra Hospital. Since the incident near the hospital happened immediately after the incident at the harbour, it appeared that casualties and first responders were being deliberately targeted. Scores of people were killed and wounded in the attack.

Initial blame was placed on an airstrike by the Saudi-led Coalition, which has been advancing on the strategically important Hodeidah from the south, in partnership with the United Arab Emirates (UAE). Despite Coalition denials, these claims were certainly credible, as the Coalition has previously carried out strikes described by Amnesty International as “indiscriminate, disproportionate or directed against civilians and civilian objects”. In June it became evident that an MSF medical centre set up to treat Cholera patients had been bombed, despite its co-ordinates being shared 12 times with the Coalition and the markings of the Red Crescent being clearly visible on its roof.

However, images and video purporting to be from the scene of the attack on the hospital appear to indicate that this was not an airstrike, but rather a mortar attack. This article will verify and analyse the open source information associated with this attack and identify lines of enquiry which may aid attribution.

Videos from the harbour

There are several video clips which have been aired by a number of outlets which show casualties and ambulances by some kind of harbour. It is possible to geolocate these videos to the vicinity of the harbour in Hodeidah. There is a short portion of one of these videos which also shows what appears to be damaged caused by some kind of explosion, immediately next to the casualty visible in Image 2.

Image 4 – Damage to roof of a warehouse (Courtesy of Almasirah)

Videos and Images from the Hospital

There are several images and videos showing the scene outside the hospital where the second incident took place. It is evident that multiple casualties happened at this location, with body-parts and blood strewn around the scene. It is clear from geolocating these images and videos that the event happened immediately outside an entrance to the hospital, while the same damaged vehicles can be seen in many of these videos and images, indicating they are from the same incident. 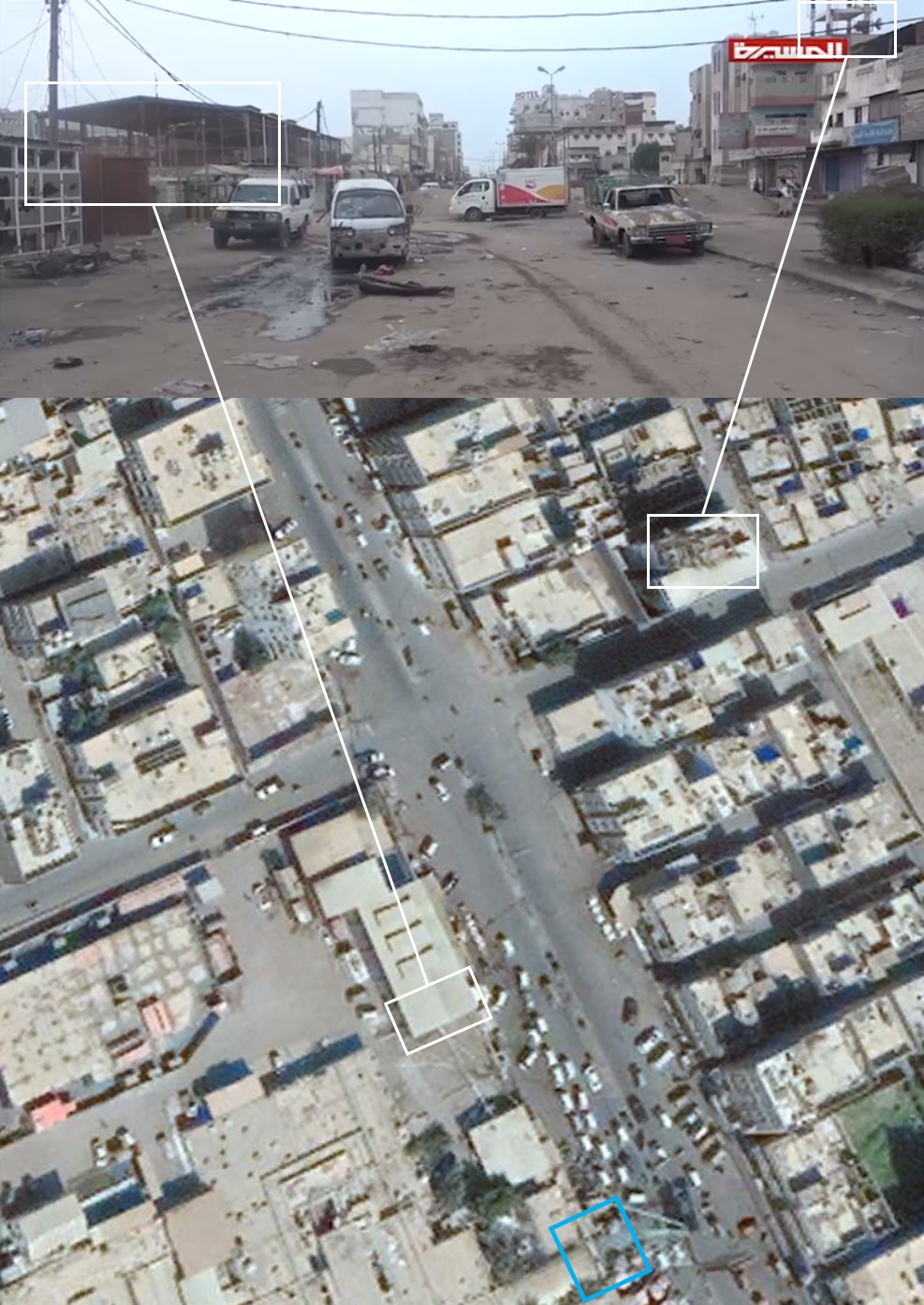 Image 6 – Still from a video looking north, away from the entrance to the hospital, marked in the satellite image in blue (Courtesy of Almasirah)

Craters near the Hospital

A potentially vital piece of evidence is included in some of the videos and images from outside the hospital: fragmentation craters, almost certainly created by the munitions which caused so many casualties. Within these craters there appear to be remnants of those munitions. Image 7 – Crater 1, note the tail fin visible on the right of the crater (Source) 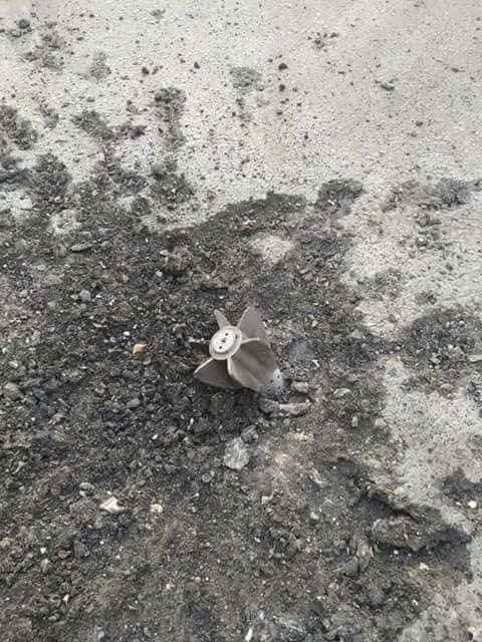 These two craters, and their locations, can be tied together by the video below, which shows a militiaman moving from Crater 2 to Crater 1.

Other images purport to show damage caused to the al-Thawra Hospital Archives and another hospital nearby called al-Rasheed.

The nature of these craters, the damage seen at the harbour and the remnants of munitions found at the scene strongly indicate mortars were used, not an airstrike. Tail fins recovered from the location of the strike next to al-Thawra Hospital indicate that these munitions appear to be relatively distinct in their design. Their size strongly suggests they were of a large calibre, likely 120 mm, and the fins do not appear to be of Soviet Bloc origin. It should be noted that although Houthis do apparently field 120 mm mortars, they generally use weapons designed in the Soviet Bloc. Image 10 – Various views of one of two tail fins seen in footage related to this attack. The image on the left (source) matches the two tail fins pulled out of Crater 1 (bottom right) and Crater 2 (top right).

Despite an extensive search of open sources depicting 120mm mortar bombs no exact match was found. The angles of the fin, and the vent holes arranged in a 4, 5, 4, 5 manner make this munition very distinctive.

Mortar bombs produced by Rheinmetall Denel Munition appear to have fins with a very similar shape, and display vent holes in the distinctive 4, 5, 4, 5 pattern. However, it was not possible to positively ID a 120 mm HE round with this configuration due to augmentation charges obscuring the vent holes. It should be noted that Rheinmetall supply both Saudi Arabia and the UAE with weapon systems, including 120 mm mortar systems. Rheinmetall was contacted for comment, and asked to provide images of examples of their 120 mm mortar ammunition, but did not respond. 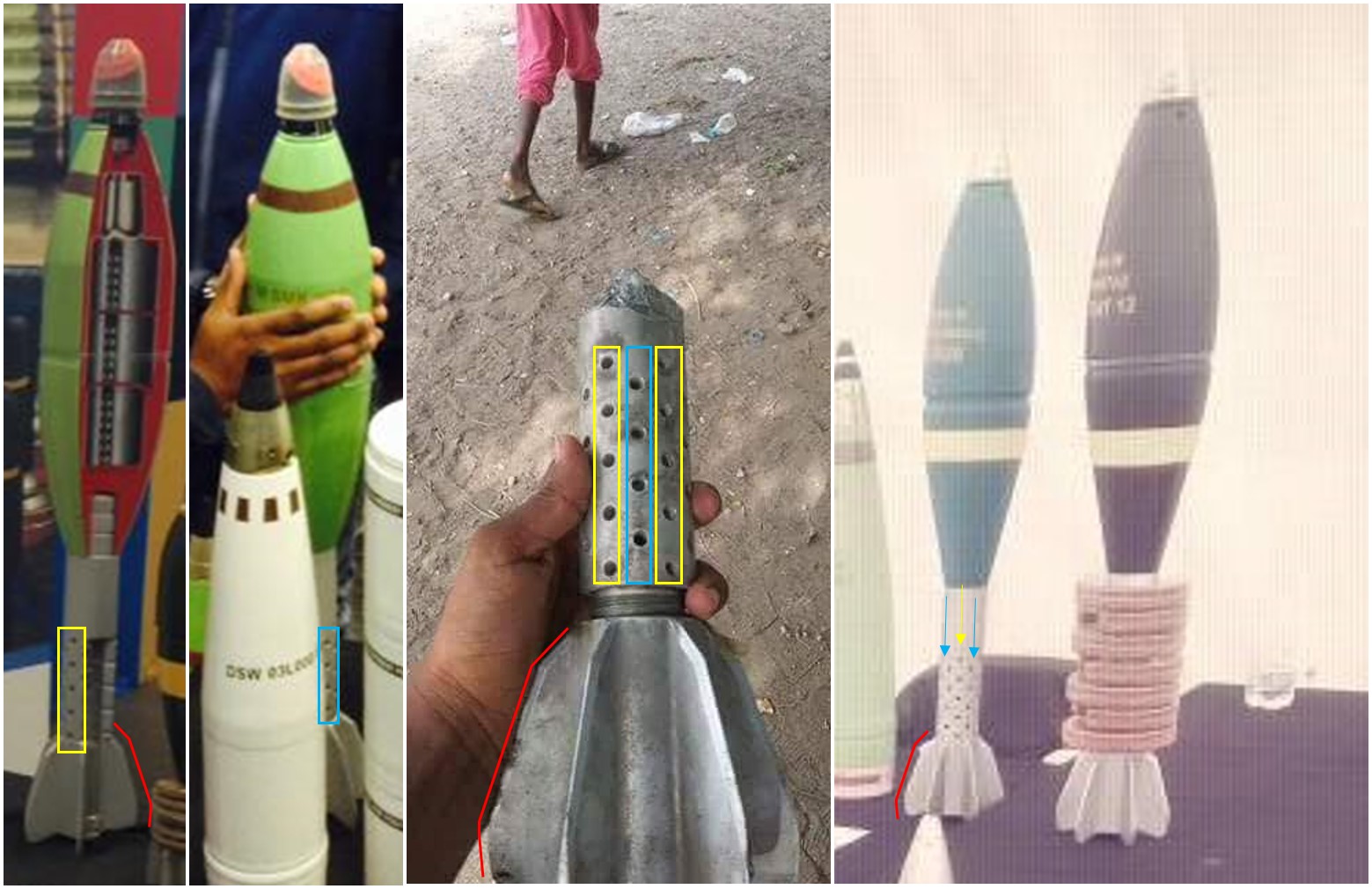 Image 10.1 – Comparison of Hodeidah tail fin with Rheinmetall mortar rounds. Note the similarity of the tail fins, marked in red, and the same 4, 5, 4, 5 vent pattern marked in blue and yellow.

In Image 10.1 above, on the left we can see an example of a munition displayed at a Rheinmetall Denel Munition stand from different angles (Sources: Front [archived], Back [archived]).

On the right we can see an example of a munition at a school career event. (Source available on request, as it appears to have been posted by a person under the age of 18).

We can establish the rough direction of origin of these mortars by examining the shape of one of the craters and applying an effective and proven technique. (This analysis was independently verified by Chris Cobb-Smith, an investigator with extensive experience analysing artillery impacts). 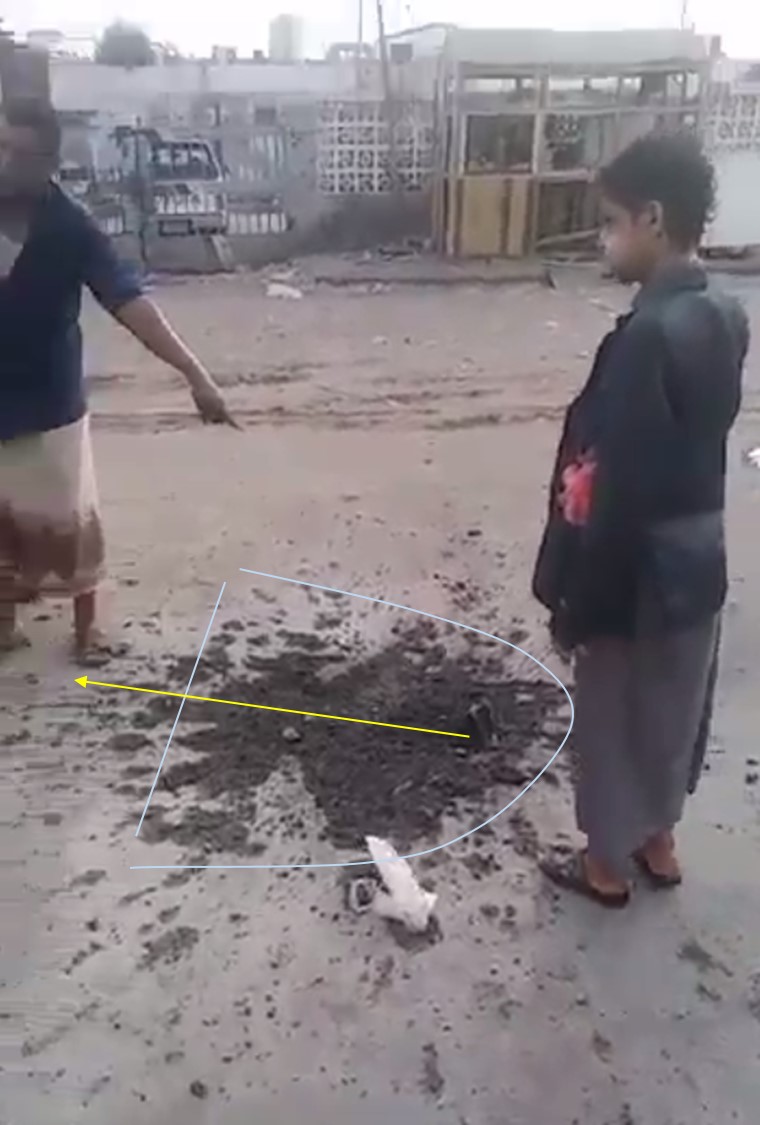 Image 12 – Method applied to the crater outside in the vicinity of al-Thawra Hospital. The direction of origin, marked in yellow, clearly points south.

The southerly direction of origin is potentially significant in this case, due to the Saudi-led Coalition advancing from that direction. Media reports that the frontline appears to be in the vicinity of Hodeidah Airport would put Coalition mortars within range of this strike.

From the open sources available it is clear that most current narratives of the events of 2nd August do not tell the whole story. The damage, munition fragments and craters all indicate that this was not an airstrike. Instead, open source information points strongly towards a mortar strike.

The shape of the craters caused by this attack clearly indicate that these mortars were fired towards the city from the south, the direction from which the Coalition forces were advancing. The tail fins of munitions allegedly found within these craters indicate these mortars were likely 120 mm in calibre. Both the Houthis and the Saudi-led coalition employ 120 mm mortars, making positive attribution difficult.

The closest match to the distinctive tail fins of these mortar bombs, including the 4, 5, 4, 5 vent pattern, appear to be munitions manufactured by Rheinmetall. Rheinmetall are known to have supplied 120 mm mortars to the UAE, who are part of the Coalition, and known to be active around Hodeidah.