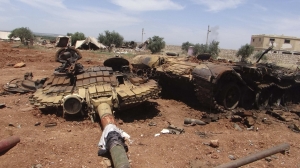 Damaged tanks belonging to forces loyal to Syria’s President Bashar al-Assad are seen at al-Shabiba military camp near the town of Nayrab, after it was seized by Free Syrian Army fighters, May 23, 2013 in this picture provided by Shaam News Network. The Syrian Observatory for Human Rights, an anti-Assad monitoring group, said the mainly Islamist rebels, including fighters from the al Qaeda-linked Nusra Front, seized al-Shabiba military camp near the town of Nayrab on the main road leading west from Aleppo to the Mediterranean. The Observatory said al-Shabiba had been used as an artillery base to bombard rebel positions in the region between the towns of Saraqeb and Ariha, attacks which it said had killed hundreds of people. Picture taken May 23, 2013. Redwan Al-Homsi/Shaam News Network/Handout via Reuters (SYRIA – Tags: POLITICS CIVIL UNREST) ATTENTION EDITORS – THIS PICTURE WAS PROVIDED BY A THIRD PARTY. REUTERS IS UNABLE TO INDEPENDENTLY VERIFY THE AUTHENTICITY, CONTENT, LOCATION OR DATE OF THIS IMAGE. FOR EDITORIAL USE ONLY. NOT FOR SALE FOR MARKETING OR ADVERTISING CAMPAIGNS. NO SALES. NO ARCHIVES. THIS PICTURE IS DISTRIBUTED EXACTLY AS RECEIVED BY REUTERS, AS A SERVICE TO CLIENTS