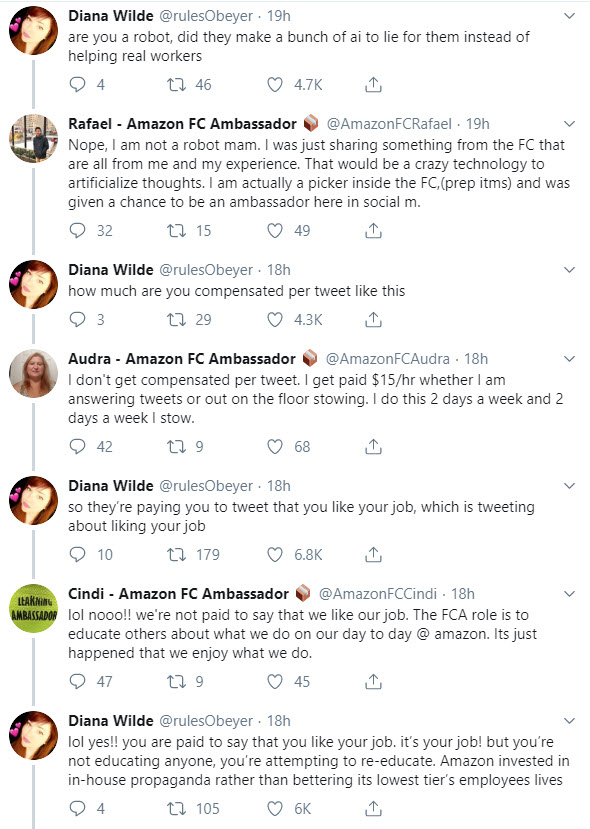 What exactly are these “Amazon FC Ambassadors”, how many of them are there, and are they actually real people?

These “Amazon FC Ambassadors” all ostensibly work at Amazon Fulfillment Centers, which employ tens of thousands of workers and have faced widespread allegations of a “dehumanizing” workplace environment.

Last year, Amazon rolled out a program where employees at these fulfillment centers (warehouses) are able to also work as brand ambassadors to describe their experiences working at Amazon. A number of media outlets reported on this new program last year after the first wave of Ambassadors sent out bizarre tweets promoting Amazon’s workplace conditions.

Per the 2018 reports, these Ambassadors were given “an extra paid day off and a [$50] gift card” for their efforts in volunteering to defend Amazon from their online detractors.

How Many Ambassadors Are There?

We started looking for every real Amazon FC Ambassador account on Twitter, and have compiled our results here. If you find additional accounts, please add them as suggestions, and we’ll keep them in. Please note that there are a number of parody FC ambassador accounts that were started today (August 15th), and any account that was started in August 2019 should be considered a likely parody/fake account.

Our search for these accounts used the following methods and search terms:

This search term on Twitter will only bring back tweets sent from the Sprinklr platform–an enterprise marketing tool used by nearly all Amazon FC Ambassadors.

Many Amazon FC Ambassadors use this shortened link when sending URLs for Amazon Fulfillment Center Tours when replying to critical comments.

All Amazon FC Ambassadors have one of these phrases in their display name, making it easy to sort out workers from different countries. Important to add the until:2019-08-14 operator with this search to filter out parody accounts.

Adding this search operator to all other terms described here is important to weed out parody accounts and jokes people are making about the Amazon FC Ambassador program, which started in high volume on August 15th.

Often, it isn’t too hard to track down these brand ambassadors, as some will tweet at each other or include their names from promotional material, as Ruben helpfully provided:

A closer examination at the tweets from the dozens of brand ambassadors reveals a few trends — they all use Sprinklr, an enterprise marketing tool.

At the bottom of each tweet, the platform used for Twitter is displayed — for most people, this will be “Twitter for iPhone”, “TweetDeck”, “Twitter for Android”, or “Twitter Web App”. For all of the Amazon FC Ambassadors, it’s Sprinklr, showing that they are all logging into the same enterprise marketing app, certainly provided on laptops or computers at fulfillment centers participating in the ambassador program. 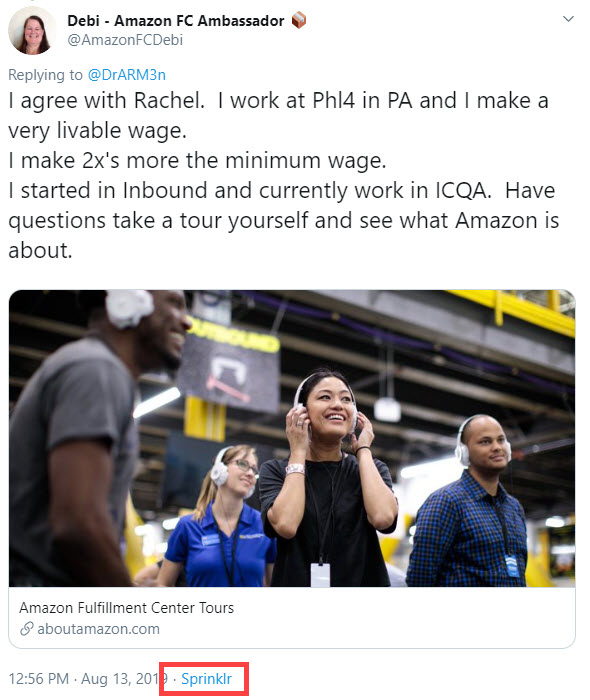 A tweet from a Spanish Amazon worker shows a laptop used by employees, possibly showing the Sprinklr dashboard.

Another employee’s tweet from the Coventry, England fulfillment center shows a few PCs that are also used for sending out tweets:

Here at Amazon BHX4 there is an ERC room – employee's resources centre, that can be used by employees to access their benefits such as dental care or cycle to walk scheme. I also use it for Social Media, to post pictures on twitter and talk about my experience. ? ? ⁉️ pic.twitter.com/O85LXwEqf5

It’s possible that some Amazon FC Ambassador tweets are being sent out from an Amazon corporate office, but it seems more likely that the employees participating in the program are using a Sprinklr dashboard from the fulfillment centers themselves.

While many of the employees tweeting out Amazon’s praises seem to be actual people, some are either using fake identities or sending messages out from recycled or incorrect accounts. As one person noted, Amazon FC Ambassadors rotate out accounts, reanimating them with new identities:

the Amazon FC ambassadors aren't bots, but the reality is a little weirder: their accounts are company property and get switched out monthly. here, Ciera seamlessly becomes Hannah after Ciera's month long assignment ends pic.twitter.com/Wu664Q2d1W

We can also see this with Michelle/Rafael, who went from a woman named Michelle who loves gardening and cooking to a Filipino man named Rafael.

Hi. I am Michelle. I am a pick ambassador and trainer at BFI4 in Kent, WA.

If you have any questions about what it is like to work at an FC feel free to ask me.

I am passionate about my family, and love to cook, bake and garden. It gives me peace. pic.twitter.com/ihaK3Jd9tr

While this account zombification is quite bizarre to see, it is likely being done in order to cut down on maintaining new accounts that require SMS and email verification. A quick survey of some of the Amazon FC Ambassador accounts shows that they all use standardized emails (fc______@amazon.com) and have actual phone numbers attached to them for SMS verification. 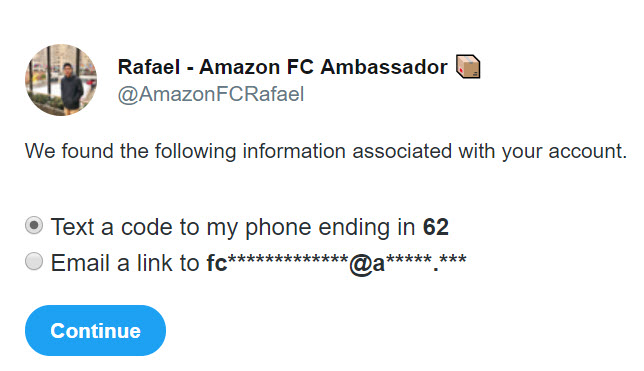 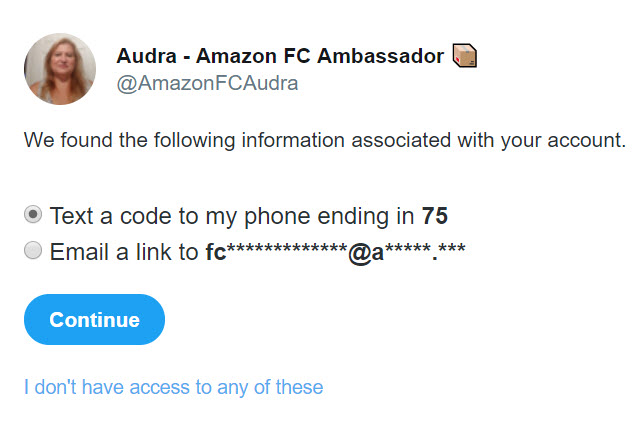 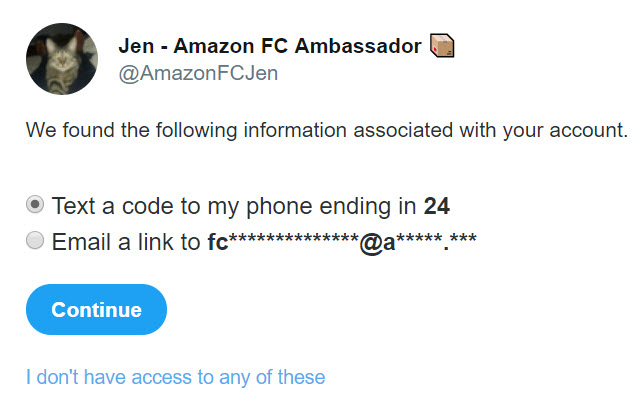 It’s hard to imagine how and why Amazon decided that such volunteer brand ambassadors would be a good idea — especially considering they almost all write the exact in the same manner and use the same hashtags and similar photos in their tweets.

While there may be different faces behind these accounts, it is hard to tell them apart, and their activities all seem to be thematically orchestrated from a corporate office. In reviewing ambassador accounts, only a few English-language participants stood out as having any personality and not using near-perfect capitalization and punctuation.

If you find any additional ambassador accounts, please add them as suggestions in our Google Sheet, or include them as a comment to this article. 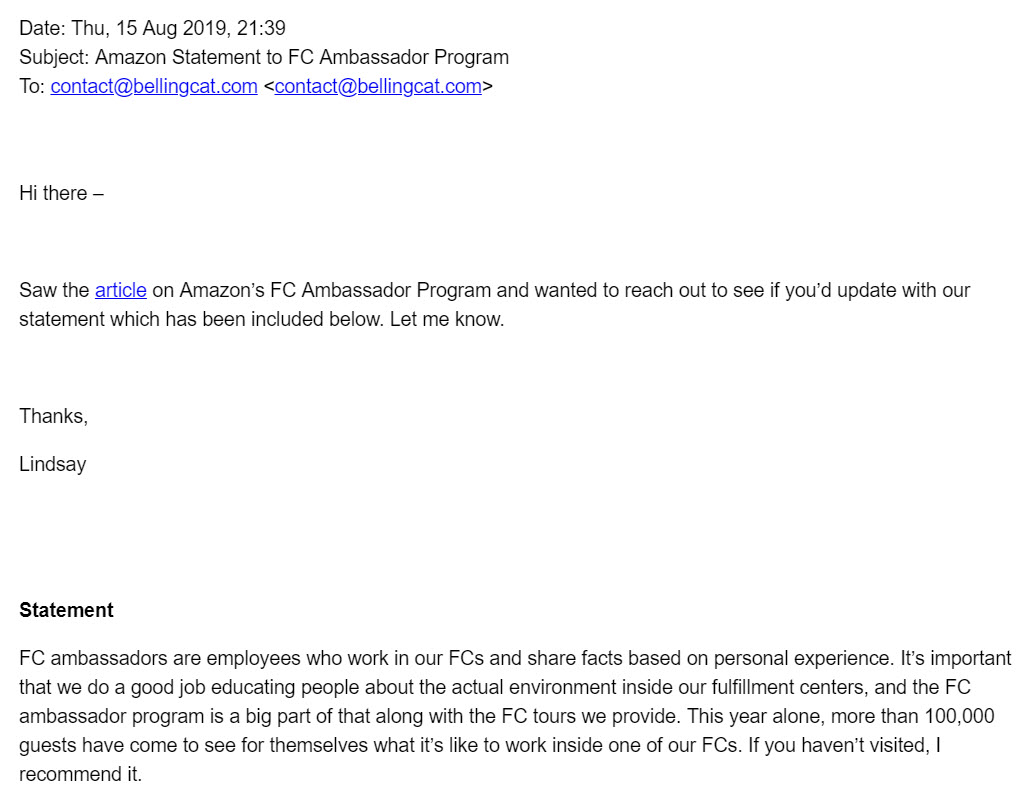