Carlos Gonzales is a researcher and trainer at Bellingcat. Carlos fuses his engineering background with digital forensics. He specialises in the analysis of photographs, videos, satellite imagery, social media posts, timelines and 3D scene reconstruction. In 2020, he was nominated to the European Press Prize category Innovation.

The following report contains reference to an active child sexual exploitation case. None of the people or commercial establishments, directly or indirectly referenced in this article, are suspected of being involved in the abuse of children. For the avoidance of doubt, it must be noted that all the information used for this investigation was publicly available. Bellingcat has decided to publish some of the findings to create awareness of the case and to show how open source techniques can help in instances such as these.

According to the FBI’s Endangered Child Alert Program (ECAP), law enforcement officials are seeking information which will lead to the identification of an unknown individual known as John Doe 29.

Images containing John Doe 29 first came to the attention of the National Center for Missing and Exploited Children (NCMEC) in January 2008.

In a YouTube video released by the FBI in 2015, they stated clearly that John Doe 29 is NOT accused of committing any abuse but may have critical information pertaining to the identity of a child victim in an ongoing sexual exploitation investigation. 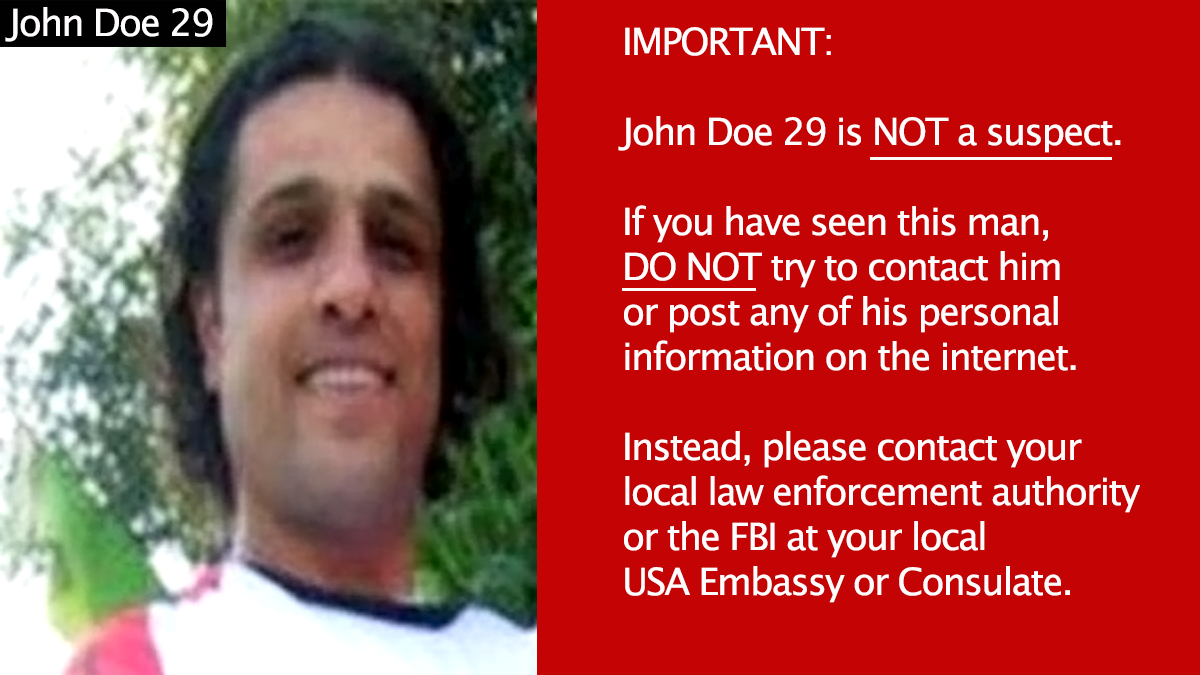 The FBI also released the following images where John Doe 29 was seen photographed next to the victim. To reiterate, John Doe 29 is not a suspect but is sought to help identify the victim.

In 2020, a new set of photos linked to the case were published in an FBI poster. Images from this set labelled BB001 and BB002 are shown below. 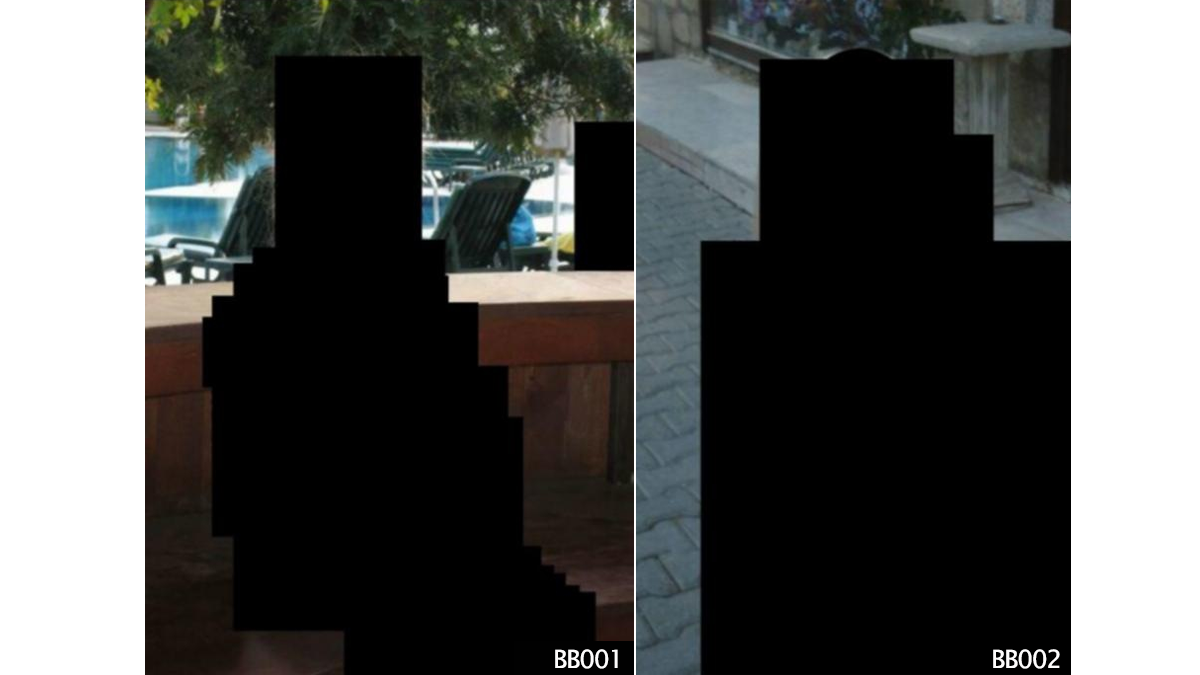 After careful analysis, we were able to  geolocate the poolside seating area in one of the images to a hotel near to the town of Side in Turkey (coordinates: 36.810011, 31.346188). Again, and to be clear, no person or commercial establishments, directly or indirectly referenced in this article, is suspected of being involved in the abuse of children. We started breaking down images BB001 and BB002 in smaller sections to analyse relevant details featured on them.

We observed a particular shape and transition of green tones in a green leaf behind John Doe 29. Selecting some examples we determined the folded leaf in question was most likely a banana leaf against bright light.  Although possible to grow in colder climates, banana plants thrive in tropical-subtropical regions. 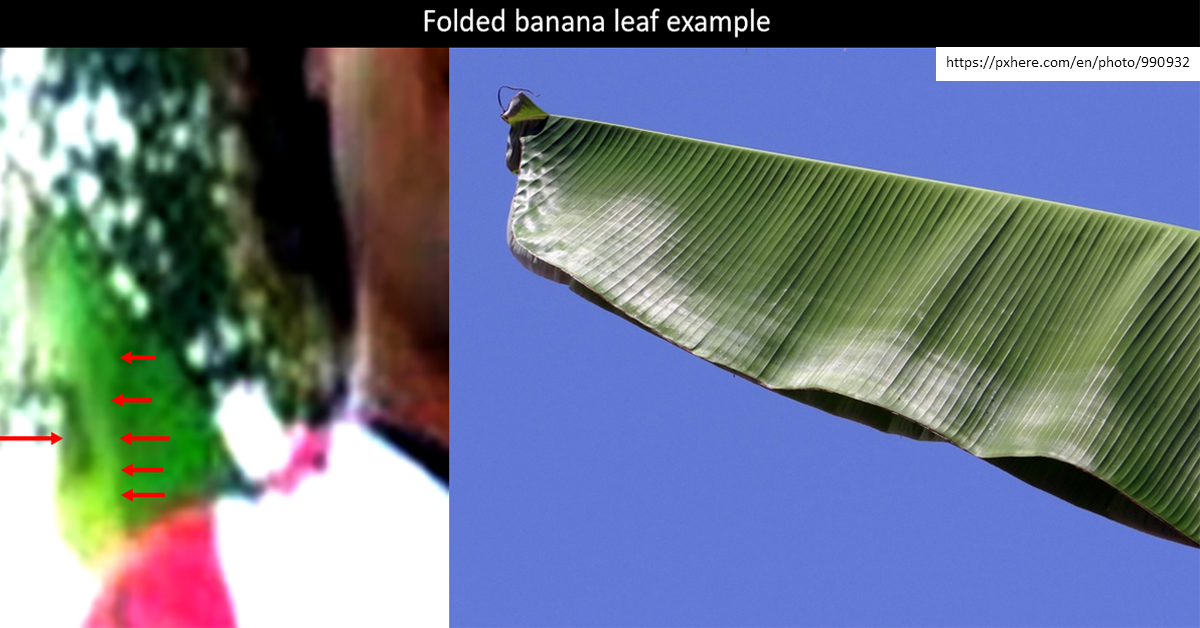 We took this information and compared it against a global banana production map as a way to explore in which countries would it be more likely to find this type of tree. Apart from the expected tropical areas, the map includes countries along the Mediterranean coastline.

Although initially too general to carry out specific searches, we kept this information as a reference to help validate what we were to discover next. A street with double “T” paver blocks is featured in image BB002. In the background, there is also a shop window. We enhanced the image to reveal a small red object seen through the glazing. It was an element that seemed to contain a key piece of information: a Turkish flag.

In order to test the probability for this kind of display to happen, we googled the term “shops in turkey” to find that, very frequently, shops of different types display the national Turkish flag in their windows, walls, products, etc; as shown in the image below. 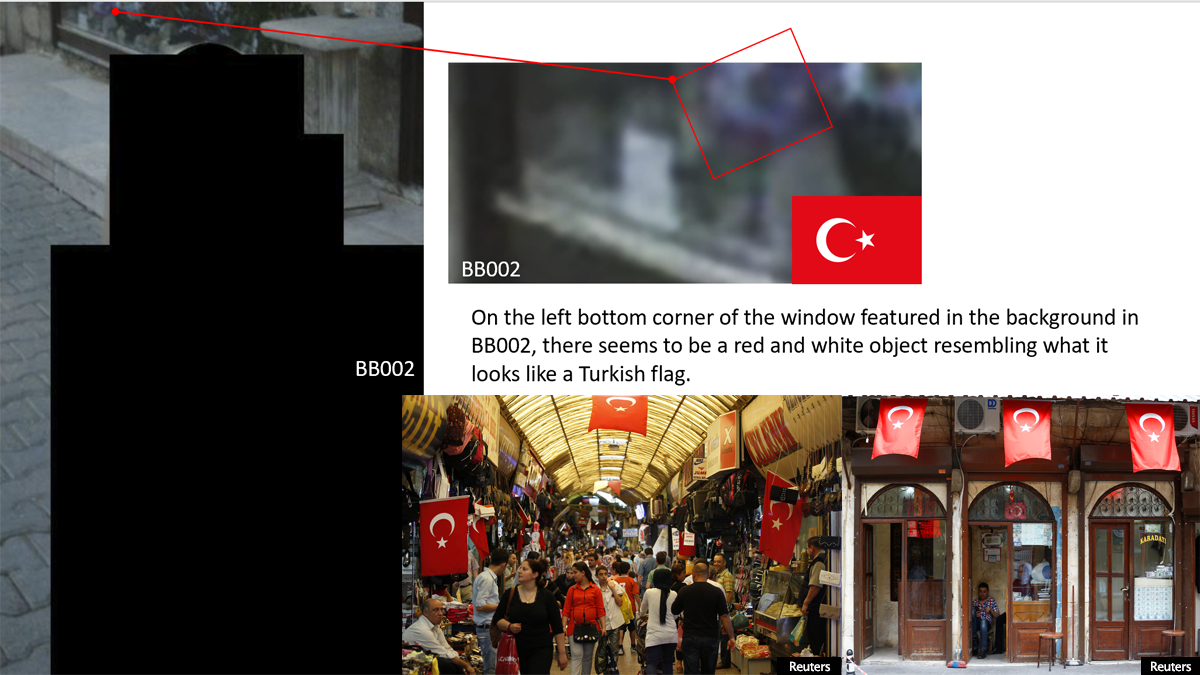 Looking at image BB001 in detail, we spotted what seemed to be a metal litter bin reflected in the pool water. This particular design, with a hoop at the top and in different colour variants, was found to be very popular in parks and hotels across different towns in Turkey. Some examples of local manufacturers/distributors were found here. The sun lounger was also verified to belong to the Grosfillex brand. The model series is called “Miami”. The curved feet and arm support as well as the seven stripes on the backrest match the loungers featured in the poolside seating image BB001. 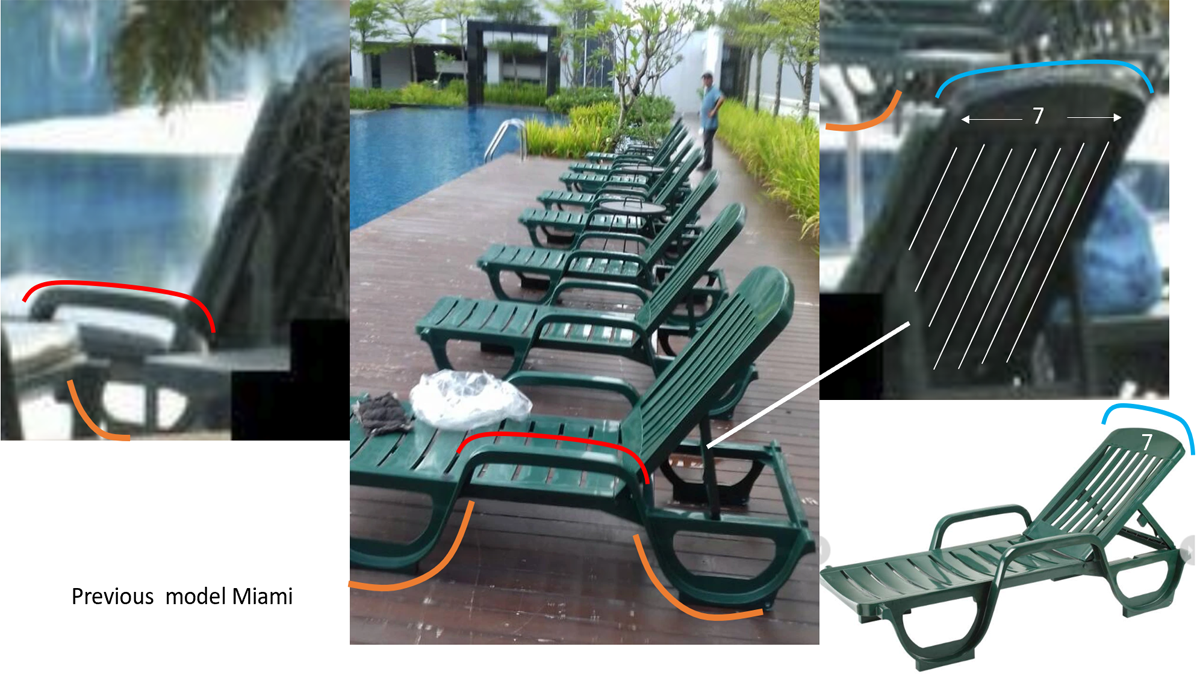 We found a distributor for this brand of loungers in Turkey. After checking around 280 references listed in their website, we couldn’t find a matching pool setting. However this search did help us to understand the type of facility we were looking for.

In an attempt to determine the layout and size of the pool area, we roughly recreated the scene observed in BB001 by constructing a 3D model with SketchUp, a computer program that is more generally used by interior designers, engineers, architects and in video game design. In this case, however, it helped us further visualise and gather more detail about the area around where the image was taken. Source image on right: FBI ECAP. Image on left: A screengrab of a 3D model created in SketchUp

In order to achieve a similar configuration and perspective; we positioned scaled models of typical sun loungers and parasols at different distributions. We set the point of view height at approximately 1.5 meters and at a short distance from a representative small child figure sitting on a raised surface.

The results suggest the victim was most likely seated at a height of approximately one meter. Considering that on average a typical seat or bench is raised just 50 centimetres from the floor and given the proximity to the pool; we concluded the surface in question was most likely a round pool bar.

The length of the pool in the direction of the shot was roughly estimated to be above 25m and the distance between the camera and the first row of loungers at least 9m. Source: A screengrab of a 3D model created in SketchUp

We explored the top 10 tourist destinations and surrounding villages in Turkey. Starting from Istanbul, we moved north to south along the west coast.

In the small village of Side, on the country’s Mediterranean coast, we found several examples of buildings, shops and streets sharing similarities with features observed in image BB002. In particular: the stone façade, brown window frames, marble curbs and double “T” street paver blocks.

Source of image on right: Google Street View. Images in centre and on right: FBI ECAP Although the location was not a match, this piece of information allowed us to determine the hotel was related to another facility: The Primasol Hane Family Hotel.

Analysing imagery for the early 2000’s, the pool area we found in this new hotel matched all of the elements seen in BB001: a round pool bar, trees, metal bins with top hoop, cream parasols and green Grosfillex chairs. 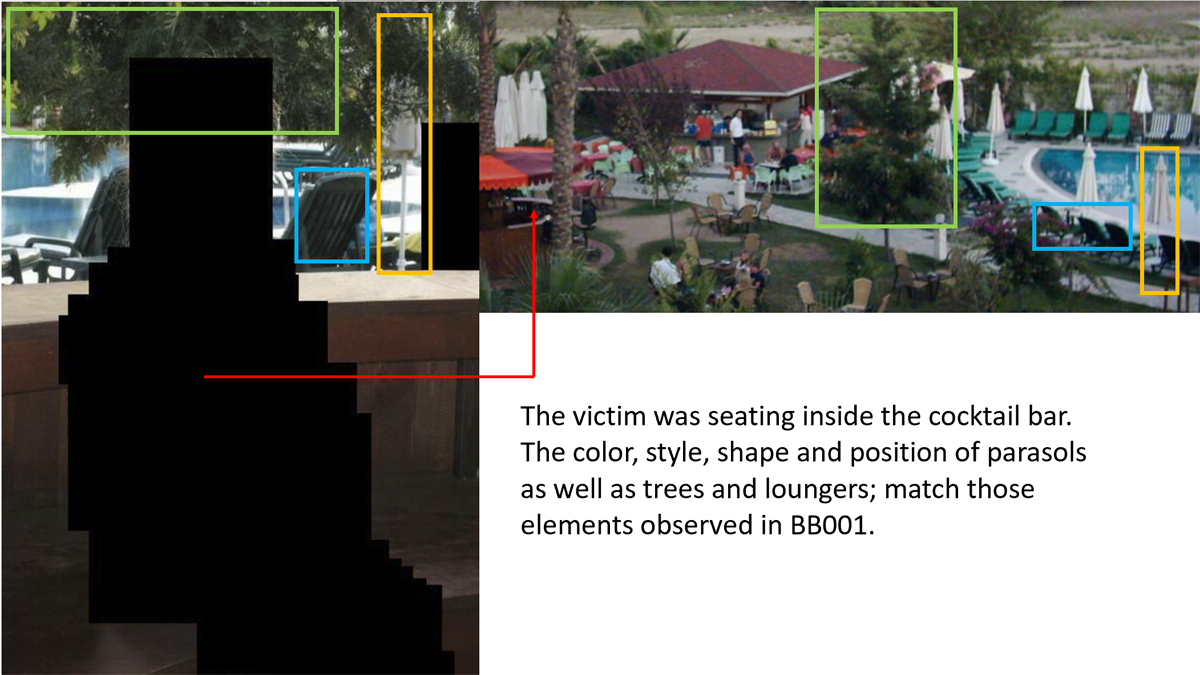 The pool area distribution was also very close to what we predicted with our 3D model. The victim was indeed seated inside a pool bar when image BB001 was taken. The location was verified. 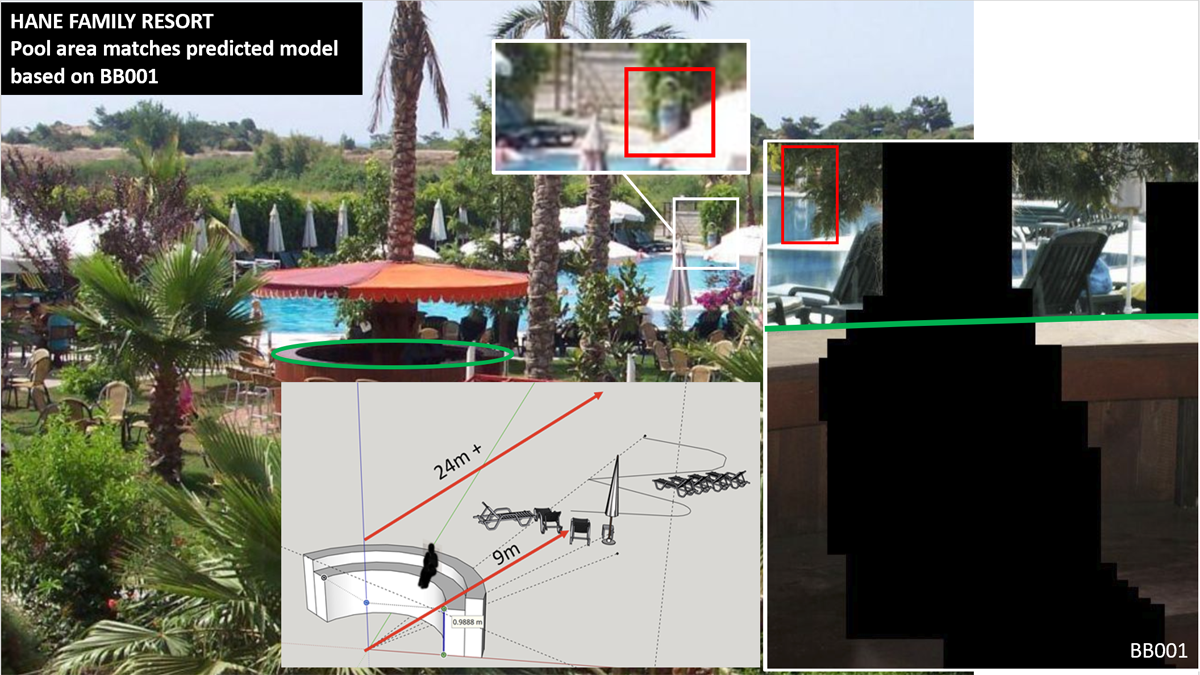 Having geolocated the pool, other details  allowed us to determine when approximately image BB001 was taken via imagery compilation and comparison.

The round bar, the green loungers and the cream parasols were already on site in October 2005. In May 2006, the litter bin at the end of the pool was brown (most likely wood) and was not changed to stainless steel until June 2006.

By May 2007 the round pool bar was not on site anymore and the cream parasols were changed to a green-white stripes pattern. This means BB001 must have been taken before this date. 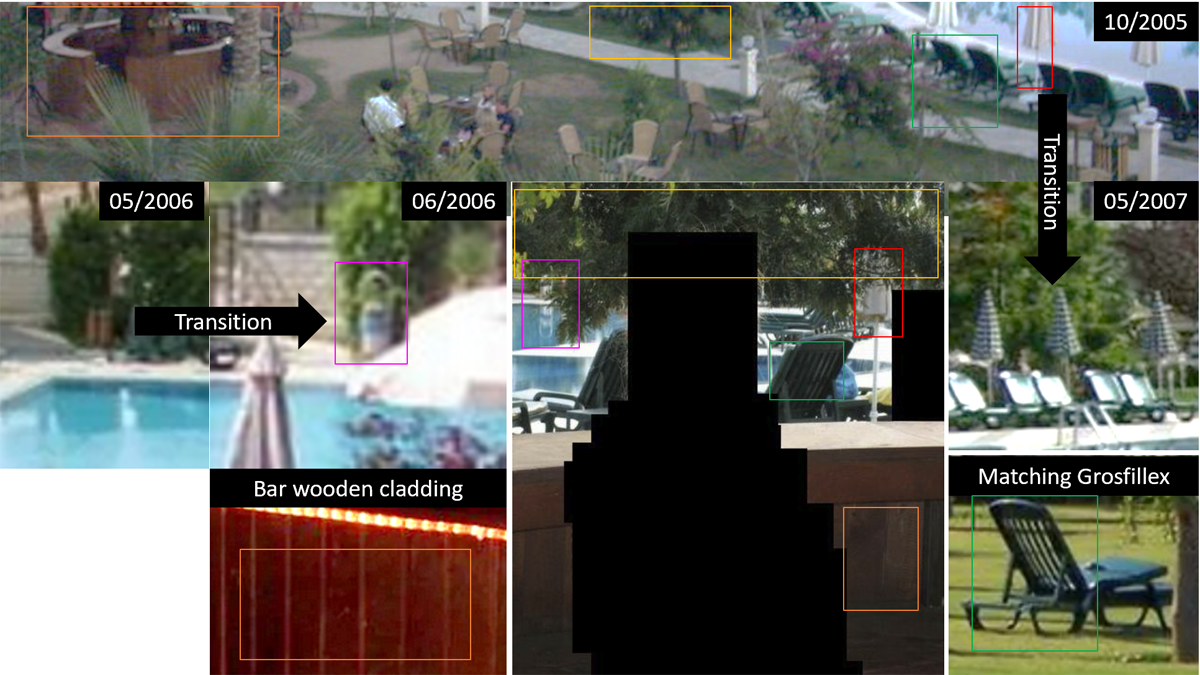 Analysing image BB001, there is a turquoise object on a small side table next to one of the green loungers. Surprisingly, when surveying different hotel pictures, we noticed a turquoise bag on the floor very close to the pool area and matching the object seen in BB001. The date of the picture with the bag was detailed as July 2006.

After surveying thousands of guests’ photos and videos taken in the hotel, it appeared that German had been the main language spoken by guests. We found examples of Turkish staff engaging in conversations and written messages in German. Entertainment shows were also put on in German.

On Tripadvisor, German appeared to be the main language in which reviews were left prior to 2010. However, there also appeared to be a significant number of reviews left in Turkish too. 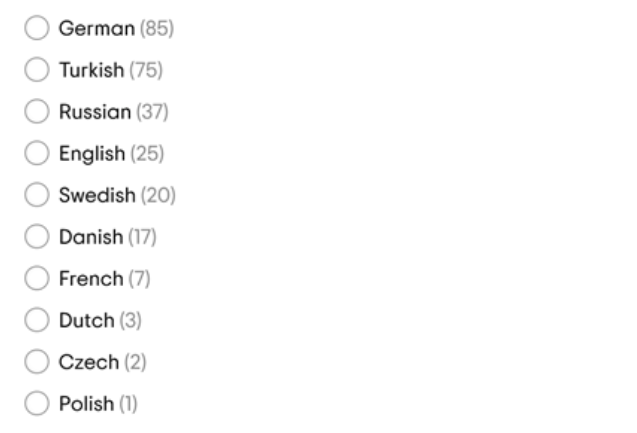 A screengrab detailing the languages in which reviews were left on TripAdvisor prior to 2010.

While that is noteworthy, it does not confirm that John Doe 29 or the victim from any of these countries.

Analysing  the evidence presented above, we conclude the FBI’s picture BB001 was taken in Turkey during summer 2006 and most likely in July of the same year.

Although the victim now could be anywhere in the world, the hotel appeared to mainly cater for German and local Turkish guests during the early 2000’s. However, this does not offer proof of the potential nationality of John Doe 29 or the victim.

Again, to be clear, the FBI state that the man known as John Doe 29 is not accused of any exploitation or abuse but may have useful information pertaining to this case.

The exact location and name of the hotel has been voluntarily passed to the relevant authorities before the publication of this article.

If you have any information concerning this case, please contact your local law enforcement authorities or alternatively a Crimes Against Children FBI Investigator at the nearest American Embassy or Consulate, or submit a tip online at  https://tips.fbi.gov/.