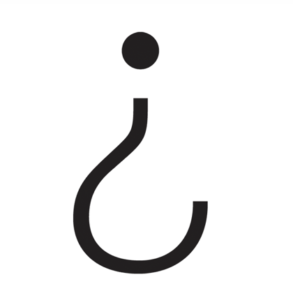 India’s coronavirus crisis continues to escalate as it becomes one of the most severely hit countries in the world to date. The situation is particularly dire in the nation’s capital, Delhi, where hospitals are facing shortages of medical oxygen for patients.

However, for many severely ill residents, even being admitted to a hospital is a significant challenge. Delhi’s Corona Dashboard indicated just 16 vacant Covid ICU beds across the National Capital Territory with an estimated population of 19 million people.

In desperation, many are turning to social media sites such as Twitter to find medical resources, including hospital beds, oxygen, convalescent plasma, and monoclonal antibody treatments. 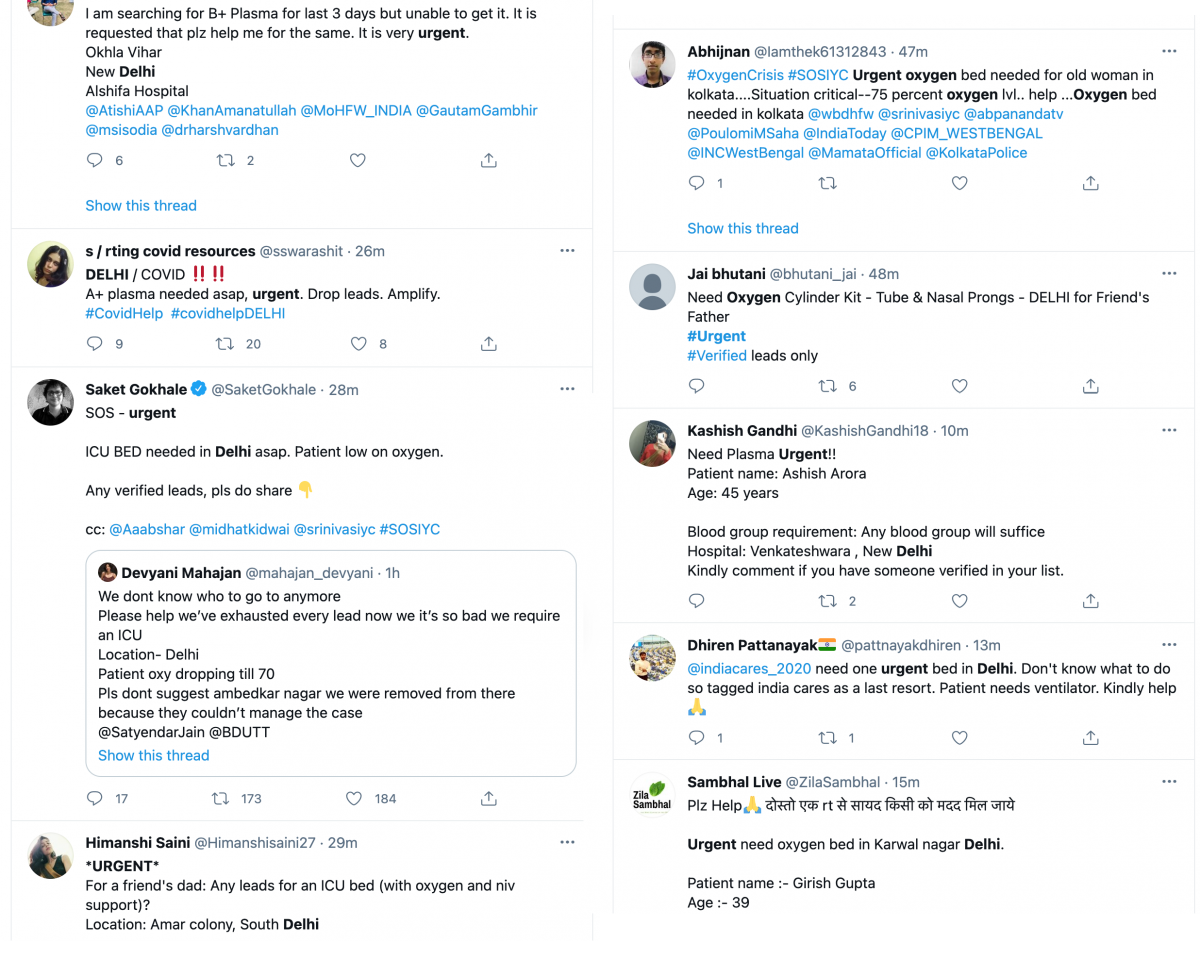 Search results on Twitter for the query “delhi urgent” contain thousands of tweets seeking Covid treatment resources. Most of these tweets request leads and information via phone numbers. Bellingcat has chosen not to include images of these tweets in this article

These cries for help provide a window of observation into the speed of escalation of the crisis and the dangers Covid-19 still poses. During March, there were on average only five tweets per day (excluding retweets) containing the keywords “delhi” and “urgent”. By April 21, this had increased to over 400, with a new request for help sent every 24 seconds late in the evening on April 22. The percentage of these requests indicating a need for oxygen also increased dramatically on April 22.

While India also dealt with a significant coronavirus wave in 2020, social media data during that time period compared with the present shows that the current crisis is much more severe. These Twitter patterns were analysed by using the open source tool TWINT to collect tweets matching a particular search query (in this case, “delhi urgent”) into a CSV file with the command twint -s “delhi urgent” -o tweets.csv –csv. This file was then grouped by date and graphed with Python. 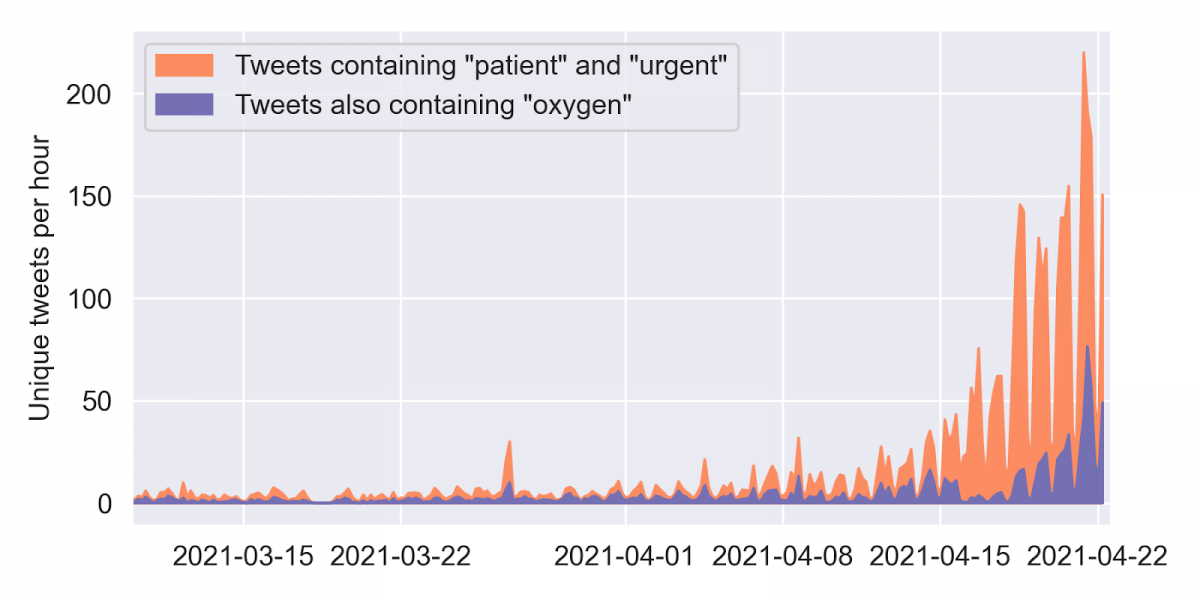 Most, but not all, of these tweets come from India, with a high proportion from the Delhi metro area. This proportion is not only because of the severity of the crisis in Delhi, but also likely because of the other conditions necessary to get a message out across social media such as a mobile device and internet access. Delhi has the highest internet penetration of any Indian city, at 69%, according to a 2019 Nielsen report.

Many tweets matching these keywords also contain the name of the city where the patient is located. In addition to Delhi, the suburb of Noida and the smaller cities of Lucknow and Indore are also well-represented. Across India, a vast and diverse country of more than a billion people, many lack the resources to seek help on Twitter or other social media platforms. Highly educated, high income people are certainly over-represented on Twitter. They are also more likely to have English language skills. These posts therefore represent only the tip of the iceberg when it comes to the magnitude of the crisis in India. Other popular platforms include Facebook, Instagram, local players such as Koo, as well as the closed messaging platform WhatsApp. Of course, a countless number of urgent situations and desperate searches take place entirely outside the venue of social media.

Using Twitter geocode searches, tweet volume can be determined for specific cities. For example, the search term “urgent geocode:26.855228,80.932529,50km” will find tweets sent from a location within 50km of the city of Lucknow. These advanced search parameters can also be used with TWINT to extract tweets into a CSV, e.g. twint -s “urgent geocode:26.855228,80.932529,50km” -o lucknow.csv –csv. It is important to note that this does not mean the tweet is about a patient in that location — for example, a family member of someone living in Mumbai might be tweeting from Delhi. 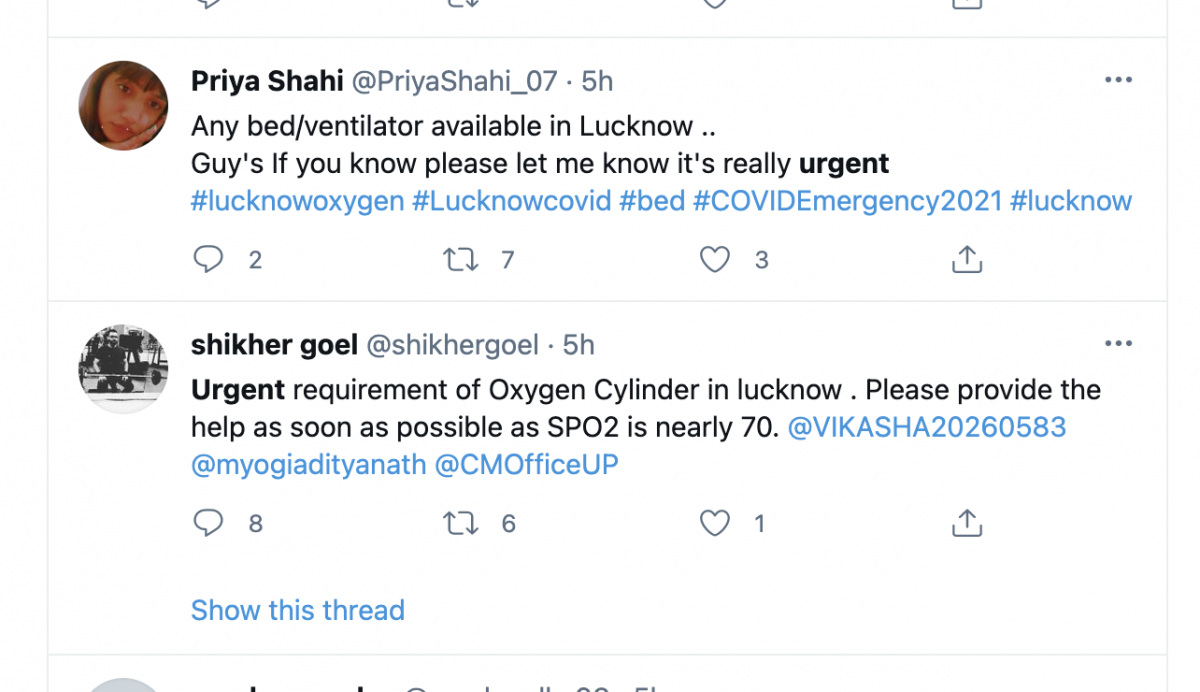 Example tweets returned when performing a geolocation search for the area around Lucknow.

Searching for tweets in this way and analyzing the volume across multiple cities shows the widespread, but not universal, nature of the current crisis. Volume in all cities began to increase sharply on April 14. While volume is highest in the Delhi region, it is also quite high in Bengaluru, Hyderabad, and particularly the smaller city of Lucknow, the capital of Uttar Pradesh, one of India’s poorest states. Lucknow, Delhi, and Bhopal also have a large percentage of tweets containing the keyword “oxygen.”

In contrast, Chennai, an extremely populous city, has a relatively small volume of tweets, perhaps indicating a degree of insulation from the crisis. The language of the tweets themselves often indicates the relationship with the sick individual,  bringing the crisis to a personal level. Some of the most common keywords in these tweets are “father”, “mother”, and “friend.” 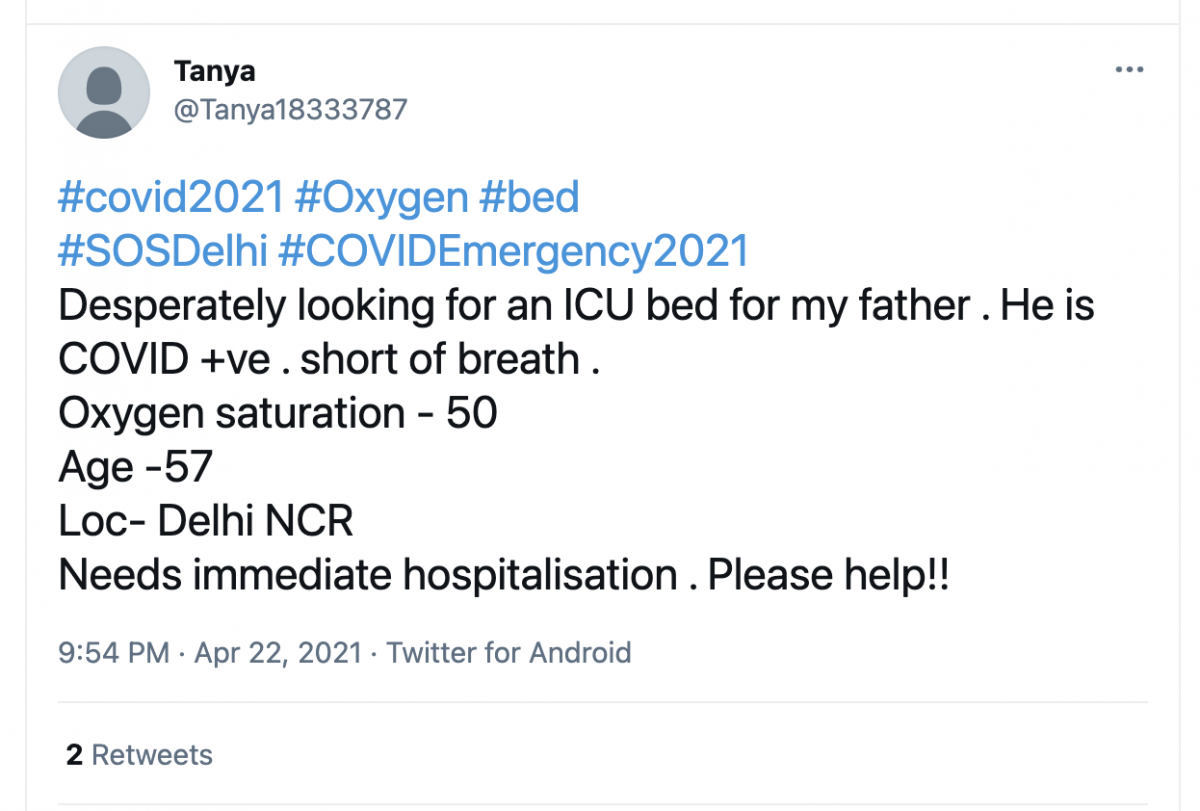 Additionally, many of these tweets contain sensitive personal information, including phone numbers and medical information. In a crisis situation, the desire for privacy is overwhelmed by more pressing needs. However, handling this data potentially poses a challenge for social media platforms like Twitter. Will this personal data remain indexed and searchable for years to come? Could these users, already shown to be in a vulnerable situation by the nature of their posts, be at greater risk of scams or harassment through use of this data? The use of social media platforms in crisis situations poses difficult challenges for protection of personal privacy, with no obvious solution.

Indians also turn to Google to find help for themselves or their close ones. Although the most successful search terms on Google in India in late March and April 2021 were still related to cricket matches, the data show a dramatic increase in how often specific Covid-19 related search terms were used from mid-April on. Similar to Twitter, there is a rapid rise in how often people search for the keyword “oxygen,” starting around April 14. 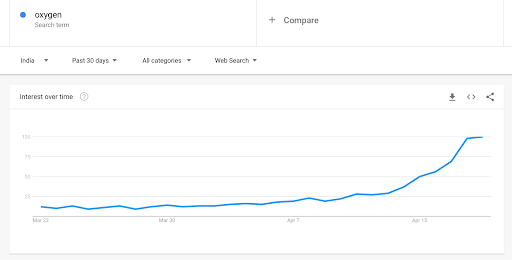 The number one search query related to “oxygen” was “oxygen cylinder on rent”. People also tried to find information on how to buy oxygen or oxygen machines and on “how to make oxygen at home”. Others wanted to learn how one can check a patient’s oxygen themselves and what a normal oxygen concentration level is. 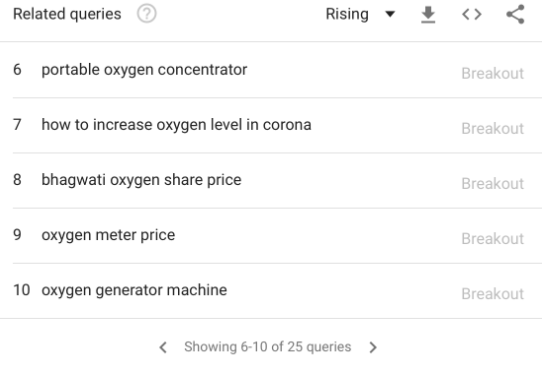 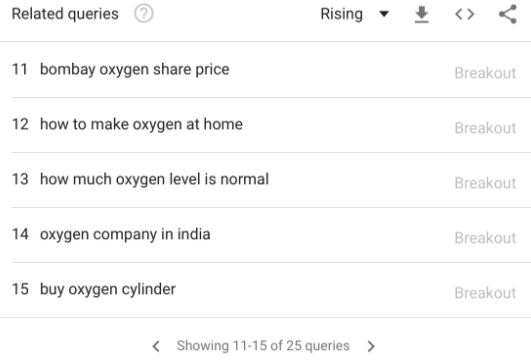 Almost all of those 25 top search queries on Google Trends lack concrete information regarding the percentage of their growth compared to the past time period. Instead, Google just adds the word “breakout” next to them, indicating a very strong growth by more than 5000%.

Breakouts did also occur to search queries related to “ventilator”, a term that became more relevant to Google users since mid-April. People who were interested in that word also wanted to find out the “difference between ventilator and oxygen”, perhaps to help either themselves or close ones who were infected with Covid-19. Another term that received a tremendous increase in search queries was “ventilator hospital near me,” an increasingly difficult search as available beds and resources dwindle.

As the second year of the coronavirus pandemic rolls on, many, particularly in the comparatively well-vaccinated US and Europe, have become inured to coronavirus statistics and record-breaking case totals. The internet appeals across India not only demonstrate the severity of the crisis, but also personalize it by focusing on an individual person’s struggle for assistance — a powerful reminder that coronavirus is as present as ever, and just as deadly, in 2021.

Logan Williams and Johanna Wild served as researchers on this story. 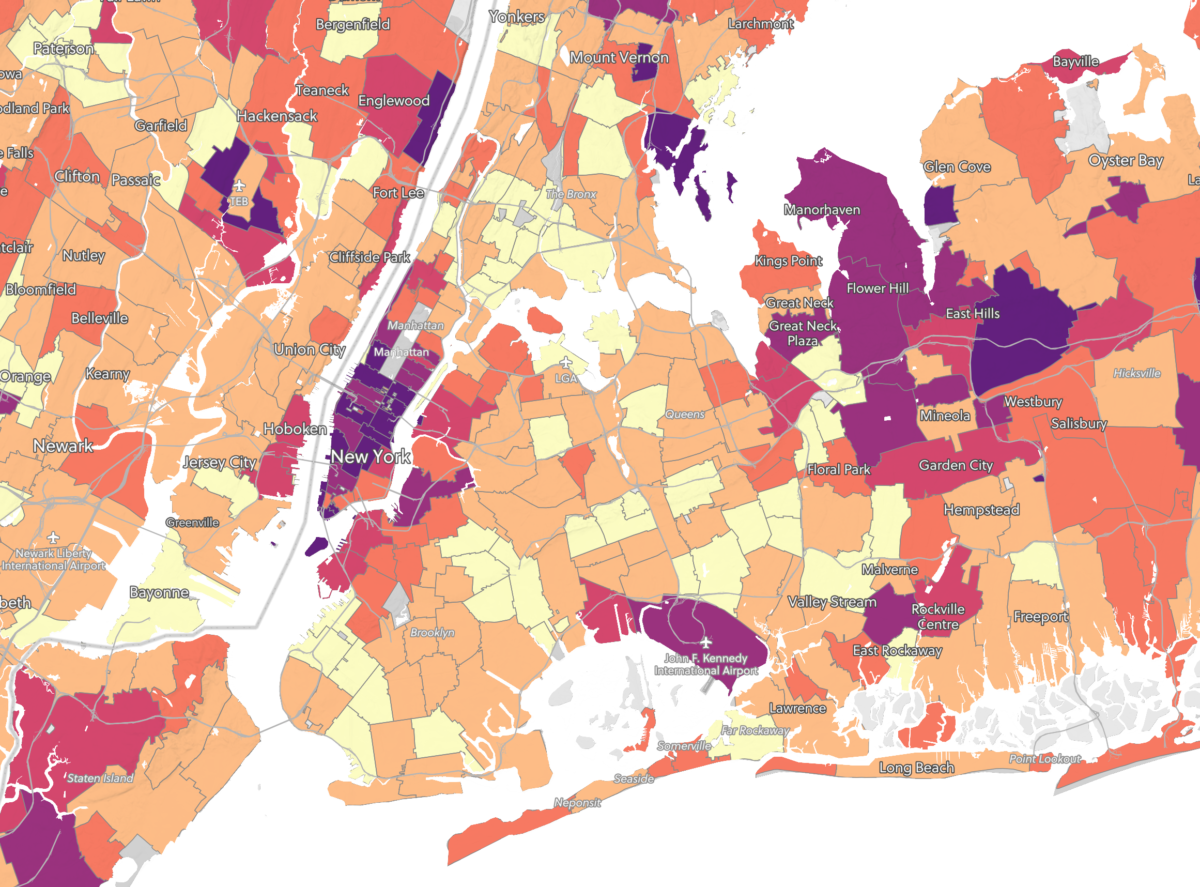