A farewell to arms transfers? Not so much. Weapons likely purchased by Saudi Arabia from Serbia have wound up in the hands of the Sudanese Rapid Support Forces (RSF) and Sudanese army fighting at the Saudi-Yemen border. The RSF, the successor organization to the Janjaweed, has been accused of war crimes in Sudan — including a massacre of 120 people just this past June. The resulting investigation raises serious questions about end-user protections of firearms exported to Saudi Arabia.

This, of course, is not the first time weapons from the Saudi Coalition have ended up in the hands of outside forces. Investigations by both  al-Jazeera and CNN found that Saudi and UAE forces had diverted U.S. military equipment to extremist factions in Yemen in violation of end user assurances. The Ministry of Defense of Saudi Arabia did not respond to questions whether it had authorized RSF or other Sudanese units to use foreign purchased firearms at the time of publication.

Sudanese army troops and RSF have fought alongside both Emirati and Saudi forces in Yemen. Primarily this happened in the southern part of Yemen. However, Sudanese forces were also deployed to the Saudi border to prevent incursions from Houthi fighters. According to the BBC, the leader of the RSF, and former leader the janjaweed, Mohamed Hamdan “Hemeti” Dagolo, was responsible for sending units to guard the Saudi-Yemen border.

In the summer of 2018, video posted to Youtube and Telegram showed what Houthi forces claim was fighting in the Alab pass between Saudi Arabia and Yemen. The aftermath of the fighting showed Zastava-produced M05 rifles being taken from the bodies of fighters alongside the seizure of Sudanese passports and identity cards of the Sudanese Rapid Support forces. Other weapons seized in the raid include Zastava produced M84 light machine guns.

Zastava Arms did not respond to questions about sales to Saudi Arabia at the time of publication.

An identity card for RSF troops and a passport issued from Nyala, a city in the Darfur region, are both shown in the video. Sudanese fighters told the New York Times in December of last year that Nyala was a main departure point of troops from Sudan to Saudi Arabia. The Darfur region in general has been a recruiting ground for the RSF.

A separate video, purportedly from the same area near the Alab pass, shows a different group of Houthi fighters against an outcropping. Here the fighters showed off a series of M05 rifles and a Sudanese passport captured in a raid. The passport was issued in Darfur’s capital city of Al-Genaina. 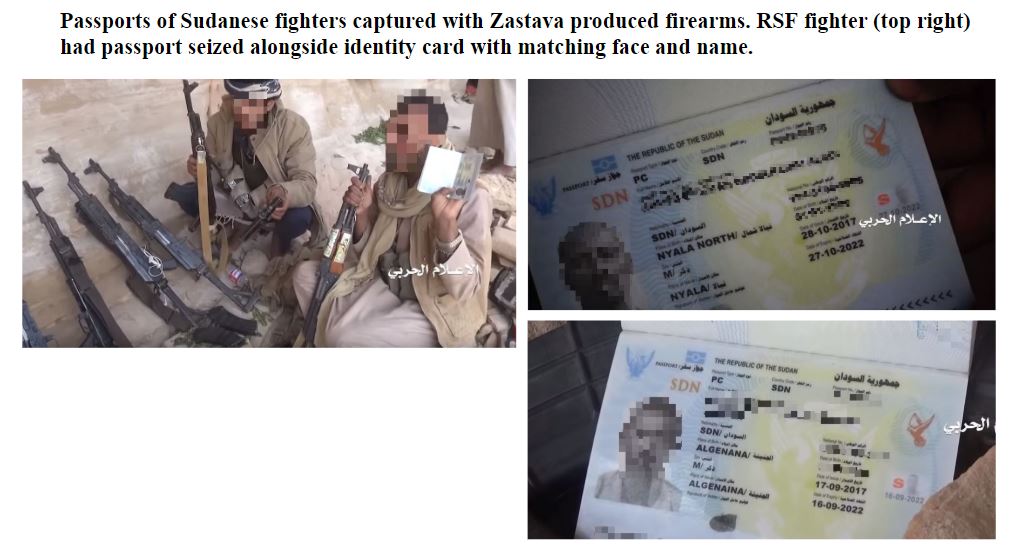 Promotional materials published by Zastava Arms detail the distinctive features of the M05 family of rifles which make them distinguishable from other Kalashnikov variants. The first of these features is the handguard, which like all Zastava produced rifles, has three cuts on it rather than the usual two cuts. The only other major Kalashnikov variant to follow this design feature is the Tabuk rifle, which has a wooden rather than black polymer handguard. The Kalashnikov variants seen in the summer 2018 video and all other evidence do not have any distinguishing features that they were produced in Iraq.

The other distinguishing feature of the rifle is the horizontally folding stock. The black polymer stock seen on the M05 and in the imagery is not used on Russian, Chinese, Hungarian, German, Romanian, Bulgarian, Ukrainian, American or other locally produced AK pattern firearms. The closest is an Israeli produced folding stock, however, those products feature grooves that do not exist in on the similar looking Serbian product.

Thus we can determine that the stocks seen on rifles captured from Sudanese fighters are only made by the Serbian production line. The sheer number of firearms featuring these stocks and handguards, alongside their unanimity of design, precludes any arguments that the firearms in question were modified using after-market parts or by hobbyist craft producers.

Further corroborating the authenticity of the Houthi videos is the presence of an alleged Sudanese military camp four kilometers from the border pass. The camp was destroyed in a missile strike in 2019.

Beyond purported fighting in the Alab pass, Sudanese troops in Jizan province to the southeast used this kind of Serbian rifle. In November 2018, another Houthi release showed extremely graphic video of dead soldiers of African origin alongside a large number of M05 rifles captured from what they labeled “mercenaries” in Jizan. 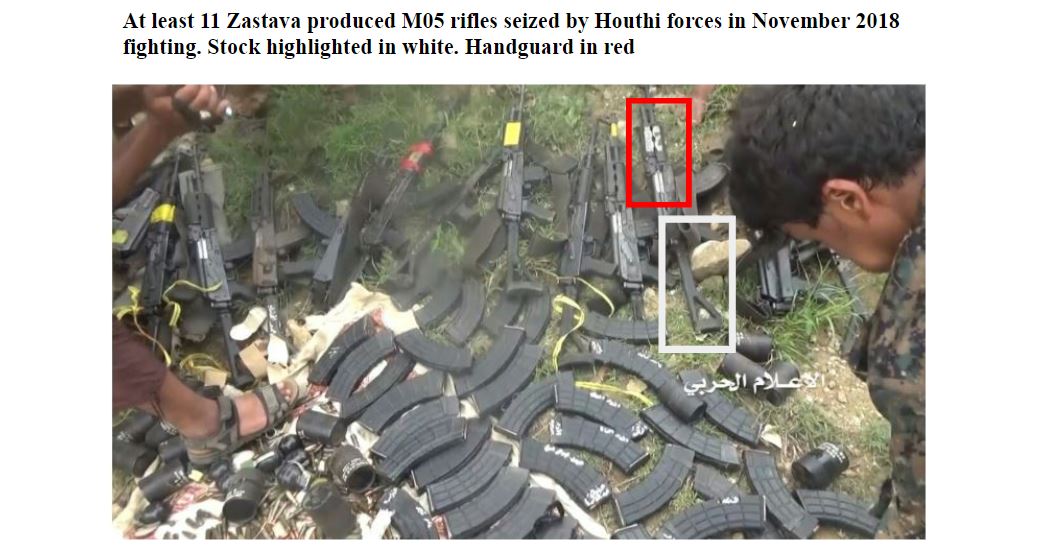 In the image that shows the sergeant with the firearm he can be seen accompanied by Saudi soldiers. This was the initial indicator that the Serbian firearms could have come from Saudi stockpiles. In interviews with the New York Times, Sudanese fighters claimed the Saudis had given them uniforms and rifles upon arrival from Sudan.

Geotagged video uploaded from the city of al-Khobh features troops from one of the Sudanese al Hazm Brigade singing and dancing. The video, discovered via YouTube Geofind and confirmed using WarWire, was uploaded within weeks of the November 2018 fighting in the area. 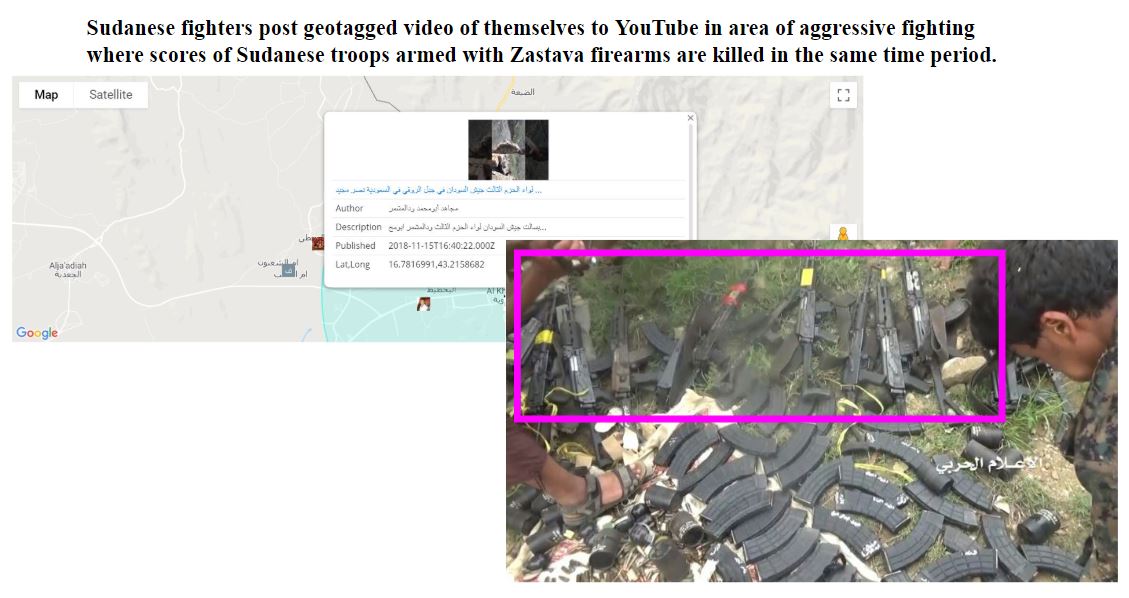 Altogether, this paints a permissive atmosphere at best for Saudi Arabia, a country already ranked alongside North Korea in terms of transparency on small arms. The lack of relationships between Serbia and Sudan, the 2018 end-user assurances, and the presence of these weapons among Sudanese forces fighting for the Saudi side in Saudi controlled areas make it highly likely these weapons came from Saudi arms stockpiles.

The potential diversion of weapons from the Saudi Ministry of Defense — or elements within the Saudi Ministry of Defense — to Sudanese forces comes at a time when the Kingdom is facing increased scrutiny over their conduct in the war in Yemen. A UK court recently ruled that past British arms sales to Saudi Arabia were unlawful. In the United States, President Trump has already successfully vetoed three resolutions attempting to block his arms sales to the Gulf.

Thanks to Miles V. of @Silah_Report for proofreading and suggestions on the comparison chart.